When is the right time to say Buon Anno?  Do you really need to wait until midnight to wish friends and loved ones a Happy New Year?
Chef Giovanni Mariconda didn't think so, and that's why he invited friends over to his place- Taberna Vulgi in the town of S. Stefano del Sole in the Avellino province. I joined Mariconda and company to ring in the new year a couple of days early over a wide selection of prodotti tipici made in Irpinia...
Cheeses like carmasciano, pecorino and caciocavallo.  I paired the latter with a sweet onion jam...

Salumi such as prosciutto crudo were hard to pass up as well as mozarella and ricotta cheese.

The evening began to warm up and so did the chef.  All kinds of specialties flew out of the kitchen, served and plated up right in front of us. Each dish typical of the territory, typical of the season.  From pasta and potatoes, to insalata rinforza with cod.  I couldn't pass up on Mariconda's spaghetti served in a cuptiello, a brown paper cone.  He tossed this pasta right in front of us with garlic, sugna, pecorino, and truffles.

We needed a cin cin to go with our boccone, so when in Irpinia....

Aglianico, Taurasi, Greco di Tufo, Fiano di Avellino, and Coda di Volpe were ready to celebrate the new year as well.  WInes from a wide variety of producers, many who were on hand to join in the festivies.

So when is the right time to say Buon Anno?
Right after dessert...

Cooking Class in a Medieval Castle...Kids Only

This day is for me, my 11 year old son David told me.  You can sit over there.

He was right.  This particular day was just for him, and a dozen other kids who wanted to cook in a castle. A medieval castle, Castello Doria in Angri (Sa)  David and company were in the capable  hands of Chef Philly D'Uva.

Philly, full of patience and passion had a mission that December morning.  They were going  to mix it up a bit.  Literally.

They pushed up their sleeves and got their hands into the flour, yeast and water creating smooth little doughy discs. They dove into the tomato sauce. 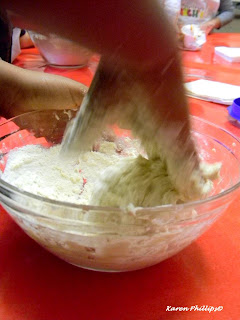 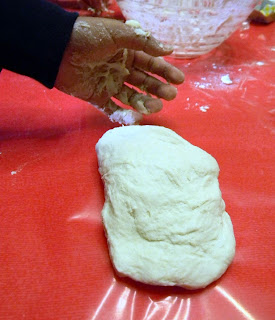 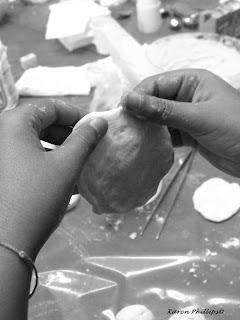 They fried up pizzas...and added sauce and cheese... 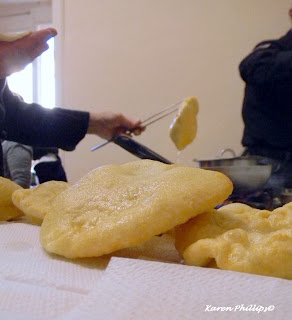 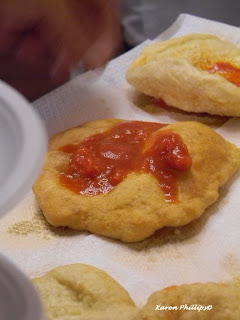 They fried up pastries and added sugar and chocolate... 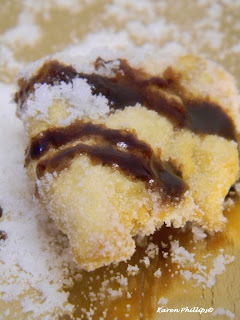 And they laughed, ate, had a great time...

A day just for him...and a dozen other piccoli chef... 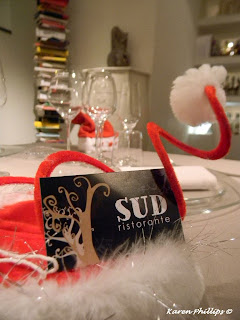 Friends from Ciao Vino, Ais Napoli and SUD Ristorante got together to celebrate Christmas and a Michelin Star. 25 mini dishes, French champagne, wine, and laughter were part of the festivities.
We began with fritto all' Italiana...


Then it was time for the cocktails...


And if that wasn't enough, a wide range of classic Campania desserts to keep the party going... 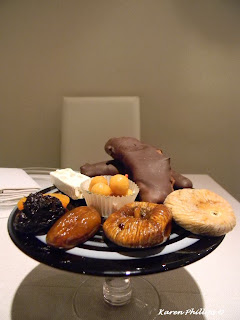 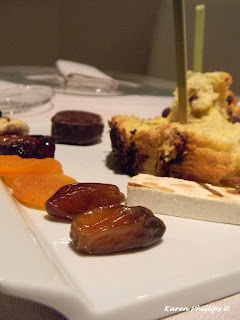 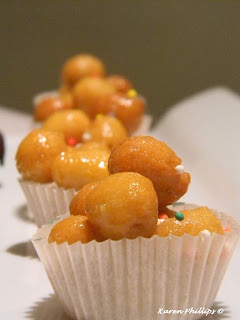 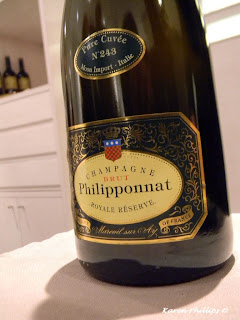 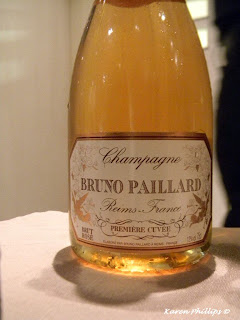 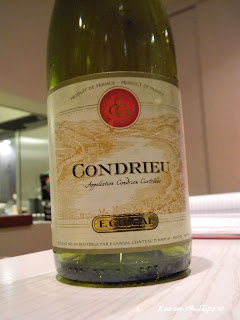 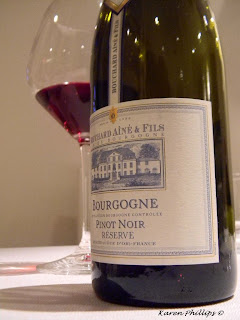 Email ThisBlogThis!Share to TwitterShare to FacebookShare to Pinterest
Labels: a night out, ciao vino, sud 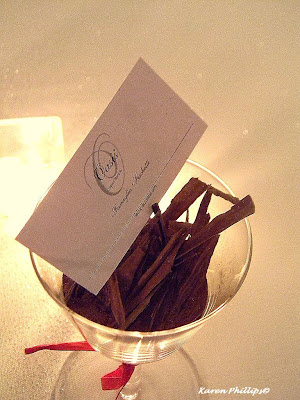 We met  in Taurasi (Av) at a dinner his restaurant was catering.  At the end of the  evening  Carmine Fischetti  handed me a simple white card...a card and an invitation to visit him and his family in Vallessacarda (Av)...  Oasis Sapori Antichi...Famiglia Fischetti.

An invitation  to visit the Fischetti family, a family known throughout the Campania region.  Definiely an invitation that I did not want to refuse.  An invitation to taste dishes rich in tradition with products from the territory.  An invitation full of flavors passed through the generations.

I couldn't think of a better time than the Christmas season to visit, so on a cold Friday evening I was back on the A16 in search of the sounds, the flavors, and the spirit of Natale with the Fischetti family.

As soon as I walked into the door, I was greeted with a familiar face, a smile  and a Buon Natale.  The large Christmas tree in the dining room wasn't the only thing that said Merry Christmas. I stepped into a special dinner for AIS Avellino starring the Fischetti menu and Umani Ronchi.


Every table has a flavor, a memory of Christmas, Puccio Fischetti pointed out. Star anise, cinnamon,  vanilla, candied fruit were just some of aromas that sat happily in a glass on each table, ready to take part in the festivities. 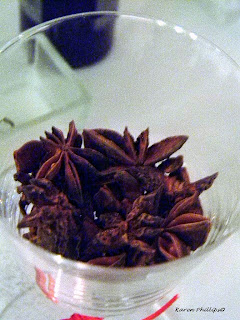 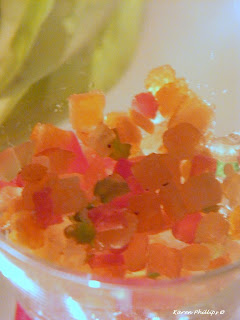 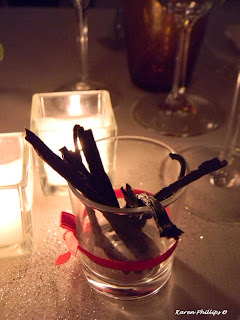 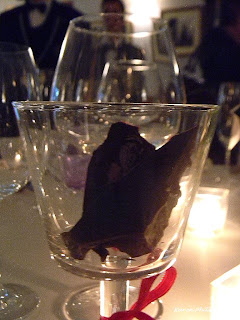 Nicola Fischetti  gave me a little tour of the  kitchen where I found his sister Lina  and the kitchen staff caught up in the excitement that the season brings.  Slicing up mushrooms and truffles ... putting the final touches on the desserts that would be served that night.


Christmas in famiglia...an evening with the family, the Fischetti family.  An evening celebrating the flavors, the aromas, and the atmosphere of the season.

When you come back, I was told, we'll have to visit the old cantina, take a walk around Vallesaccarda. It is a beautiful part of Irpinia.


Another invitation that I would be sure not to pass up...


Posted by Karen Phillips at 3:44 PM No comments:

Email ThisBlogThis!Share to TwitterShare to FacebookShare to Pinterest
Labels: a night out, dinner da..., irpinia, mesali 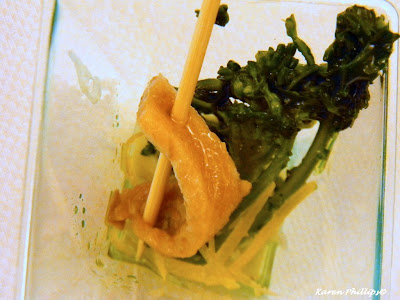 There were a row of them A row of small clear plastic hollow prisms waiting for the chef.  Chef Raffaele Vitale who silently...patiently...and meticulously filled each one with his taste of Christmas.  Broccoli di Natale, he told me.  Greens that are very common at the vegetable stands and on the dinner table during the holiday season.   But Chef Vitale added his angle to the dish...garlic mayonnaise, candied lemon peel, and lemon gelatin, he continued.  And on top, wrapped around a toothpick?  This was taste was tasty and new for me.  Aringa...aringa affumicata...smoked herring.

Posted by Karen Phillips at 4:37 PM No comments: