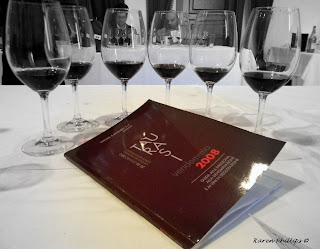 To taste Taurasi you have to understand Taurasi.  At least that’s what I believe.  When I  taste a wine, I  want need to understand it's  character.  Where it comes from, the territory.  I want to understand  the journey that  this Aglianico grape, grown, vinified, and bottled in any of the 17 approved counties goes through.  How it needs to mature for at least 3 years (four to be known as a Riserva) , with one of those years in a wooden barrel (18 months for the Riserva). In other words, to taste, you need to understand.
At least that's what I believe. So, when I was invited to attend a weekend in Montemiletto (Av) to try the latest  Taurasi 2008 vintage, I looked as it as the perfect opportunity to soak up as much as I could about  Campania's  interesting and intense DOCG red.
Friday January 20. The evening  before the first glass of 2008  was poured   I attended a lecture presented by six enologist in the know; Roberto Di Meo, Michele D'Argenio, Gennaro Reale, Fortunato Sebastiano, Massimo Di Renzo, and Vincenzo Mercurio.  Their task was divided into two parts.  First they presented information on the harvest year 2008.  Life in the vineyard in respect to the climatic conditions, rainfall, temperatures, etc.  Details such as these have an obvious impact on the life of a grapevine, of a grape, and obviously would  have an impact on what we will explore later in our glass.  So what about 2008? Known as an overall hot year, annata calda.  The right amount of rain, temperatures perfect for Aglianico.  Grapes arrived in the winery at harvest time with  a high sugar concentration and an interesting acidity.  Next, the Taurasi DOCG territory was broken up for us into four zones, four macroaree.  Each area was disected basically so that we could learn about details such as the soil profile, altitude, and sun exposition. I paid close attention to this part of the lecture knowing that it would be great background information during the blind wine tasting scheduled for the next day.  Why?  Because, for the first time in the 10 years of this event, organizers Miriade & Partners decided to present the wines in groups based on these four zones as well as a fifth category of wines made with grapes from 2 or more different macroaree. They, too, believed how important it was to understand. 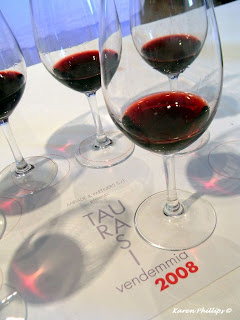 Saturday January 21.  At about 0950 in the morning, I took my seat at a table in Montemiletto's castle in the heart of the towns centro storico and prepared myself to taste.  Thirty-six wineries were on the program presenting a total of 60 wines.  Taurasi 2008, 2007, 2006-5 as well as Irpinia Campi Taurasin DOC, Irpinia Aglianico DOC and Campania Aglianico IGT from 2010-2007 were also available to taste.  I wanted to taste Taurasi 2008.
I wanted to taste wines from  Quadrante Nord-Riva Sinistra (the northern quadrant, left side of the Calore River bank)  Venticano, Pietradefusi, and Torre le Nocelle are the counties here.  This area is usually hotter than the other zones, soil is clayey for the most part  though some areas have limestone and sand.  The vineyards are between 300-400 meters above the sea facing south.  Harvest time beginning mid October producing wines with a mellow tobacco profile. I wanted to experience the aromas, explore the offerings from wineries such as Pietracupa, Donnachiara, Colli di Lapio, and I Favati.

I wanted to taste  Valle Centrale -Riva Destra (Central Valley. Right Bank). Wines made in  Taurasi, Mirabella Eclano, Luogosano, Bonito, Sant'Angelo all'Esca, and Fontanarosa.  Vineyards here live in an area which is fresher than the left side of the river at an altitude 400-450 meters high.  I was told that due to the terrain in this area, wines here would be generally more elegant and flavorful. Here I tried wines from Feudi di San Gregorio, Terra Ponte, Vigna Villae, Guastaferro, La Molara, Sella delle Spine, and Tenuta Cavalier Pepe.

Then I wanted to taste the wines presented from Versante Ovest-Le Terre del Fiano (West Side - Land of Fiano) had my curiosity.  This is an area known for their white Fiano di Avelllino, but historically a territory flowing with Aglianico vineyards. Vineyards here are located in Montemiletto, Montefalcione, Lapio, San Mango sul Calore in a terrain that is clayey. An area that I have been to numerous times in search of the perfect Fiano. Would I find noticeable differences in the wines presented?  Two wineries from this zone; Antico Castello, and Ferrara Benito ...


Would they stand up to wines such as the ones I was ready to taste from Versante Sud -Alta Valle (South Side, High Valley)?  Castelvetere sul Calore, Montemarano, Castelfranci, and Paternopoli.  Areas that I spent a a lot of time in over the last couple of years.   Vineyards with an altitude anywhere from 450 to 700 meters  above sea level.  Almost in the mountains.  This zone has  various types of terrain , but what I focused on here was the fact that here the grapes have more time to mature slowly, and often the harvest is completed in November.  So wines rich in alcohol, tannins and acidity.  Wines that also need longer ageing. I tried nine from this area;  Di Prisco, Amarano, Villa Raiano, San Paolo, Tecce, Colli di Castelfranci, Urciulo, Il Cancelliere, and Contrada Vini.


Next... a chance to see what happens in my glass when there is a mix...an assemblaggio from 2 or more macroaree. Mastroberardino  blended grapes from their vineyards in Montemarano and Mirabella Eclano, while  Rocco del Principe  used grapes from Taurasi and Montemarano.
And so I tasted twenty four Taurasis.  I examined that dark ruby color, dived into a wide range of aromas ranging from smoky spices, pepper and deep dark mature cherries.  I tasted tannins that where rough in some cases, light in others, but rarely overwhelming.  I found a few favorites and a few surprises.  Some wines were campione di botte which means that we tasted them while they are still in the ageing process.  In other words, the winery believes that they are not ready for release yet.  They need time.
And that's okay.  Because even these wines, when tasted, helped me to understand a little more about Aglianico, a little more about the territory, a little more about Taurasi... I won't compare one zone to another in terms of quality. Beauty is in the eye, or glass, of the beholder.  Each winery has their own interpretation of Taurasi.  Of course I have preferences but I respect and appreciate their differences.

Because to taste Taurasi you have to understand Taurasi.

At least that's what I believe...
Italian Version
Posted by Karen Phillips at 9:26 PM No comments:

My blog is a little over two years old. One of my favorite series is one that I entitled Vineyard Hopping.  A series of blogs based on my visits to various vineyards in the Campania region.  I thought it would be neat to put these blogs together in a book.  A collection of photos, stories and memories of my visits to vineyards throughout this region that I call home. Right now it is available only in English, and only online...but who knows :-) 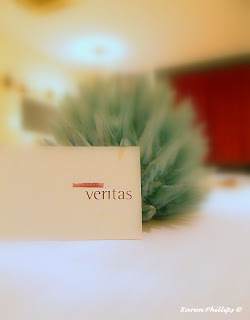 Maybe it was the stress of the holiday season; Christmas, New Year’s, La Befana.  Maybe I needed a break from studying for my up coming sommelier exam.
Maybe it was the wind and the rain.
Maybe. Whatever it was, I just wasn't smiling that day.


A friend of mine wanted to cheer me up, help me take my mind off things with an invitation to dinner.  An invitation to Veritas Restaurant on Corso Vittorio Emanuele in Naples.  I’d been there a couple of times…it might just be what I needed.  Just the ticket.

Veritas, for me, is a place where I can  relax and feel at ease with  a staff of professionals like Maitre d Pasquale Marzano and sommelier Salvatore Maresca.  Always there with  a smile, suggestions, and a new wine for me to try.   Veritas,for me, is a place where I can explore the Campania region with specialties prepared by Chef Gianluca D’Agostino.   This time, a recent renovation which took out the wine bar and expanded the dining room gave the restaurant only improved the ambiance.  Enormous photographs on the wall displayed scenes of the bay of Naples and Vesuvius.  My eye went straight to a piece of art by Carla Giusti…a black and white painting of a woman whose frown was painted red.  Maybe she needed a break as well.

Benvenuto from the chef…a little something to get the evening started….
Followed by a series of appetizers…

First courses….
And the main dishes…
We chose a wine from Corona in the Fruili Isonzo DOC region of Italy,  I Ferretti  Desiderium 2010. A white wine which is  a blend chardonnay, fruliano, and sauvignion. 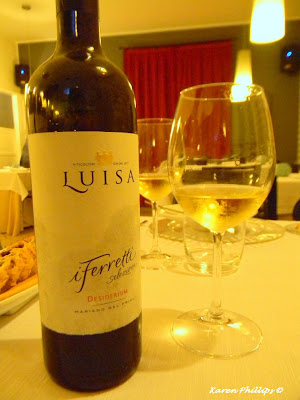 Time for dessert, I was feeling much better…how could I not be?
The evening was over…time to go.  I couldn’t help but smile as I grabbed a bite of a piccoli pasticceria, hmmm chocolate…I couldn’t help but smile as I stopped by  the kitchen for a chat with the chef.  And as Marzano helped me with my coat, I glanced over at the woman on the wall.
Wait…did I see a slight smile on her face?
No, I thought…then I went back out into the wind and rain…
smiling.
Veritas Restaurant
Corso Vittorio Emanuele 141
80121 Napoli
081 66 05 85
www.veritasrestaurant.it

Posted by Karen Phillips at 7:25 PM No comments: