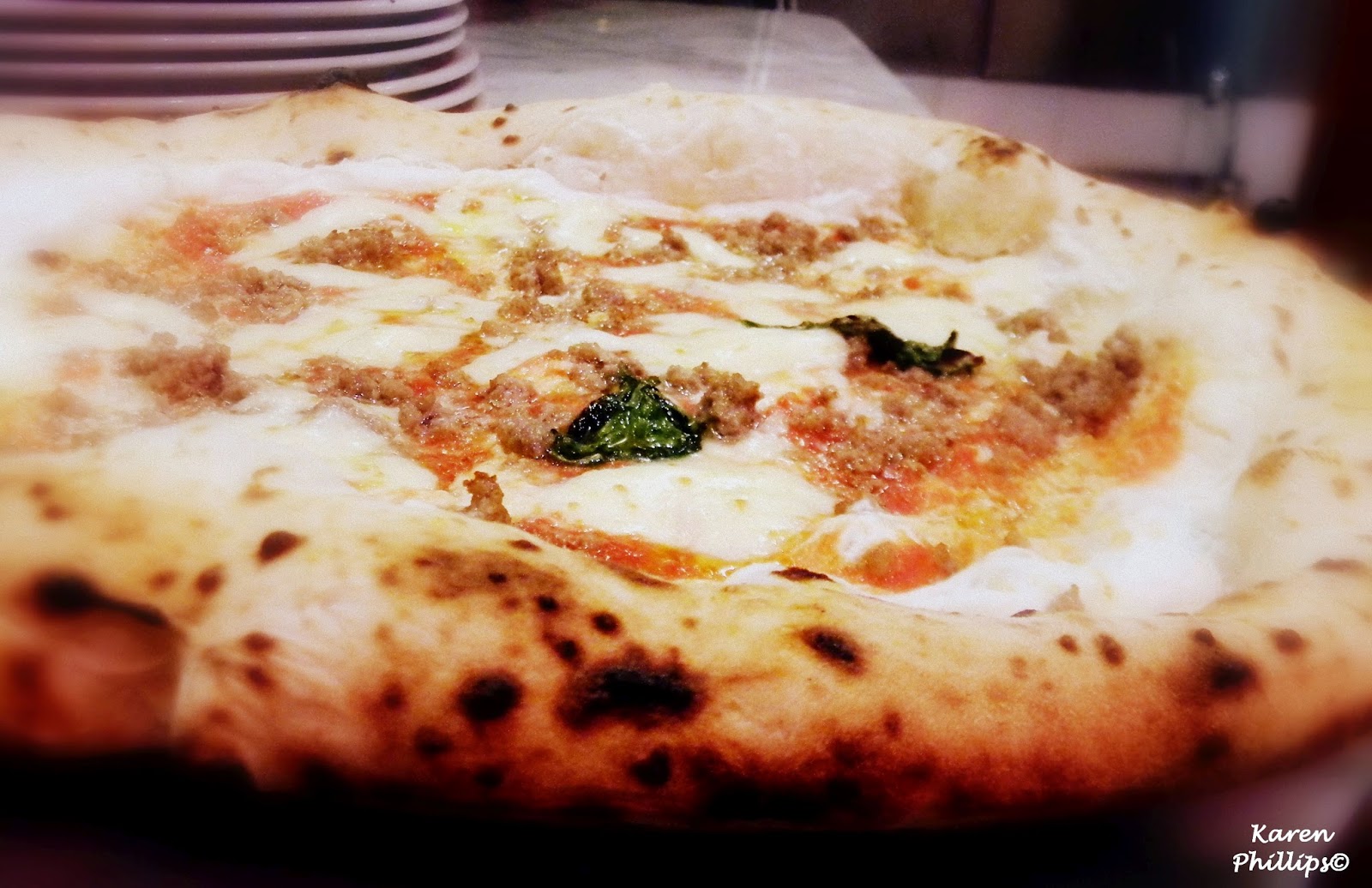 A few months back, I had a chance to try a few pizzas that were about to make their way on 50 Kalo's winter menu.  One of the new items that caught my eye - and taste buds - was pizza maker Ciro Salvo's lasagna pizza. It seemed to me to be an exciting/interesting mix combining two of my favorite foods.
Pizza.
Lasagna.
Fast forward to last evening, when the desire for pizza and a craving for lasagna hit hard. So, while Neapolitans rushed to their favorite grocery stores/markets/butchers/pasta makers to pick up ingredients to prepare their version of lasagna, a traditional  Fat Tuesday-Carnivale must, I decided to make my way to 50 Kalo', cozy up next to a wood burning pizza oven and watch Salvo in action.
So here it is...
Lasagna Pizza step-by-step...


Posted by Karen Phillips at 2:52 PM No comments: 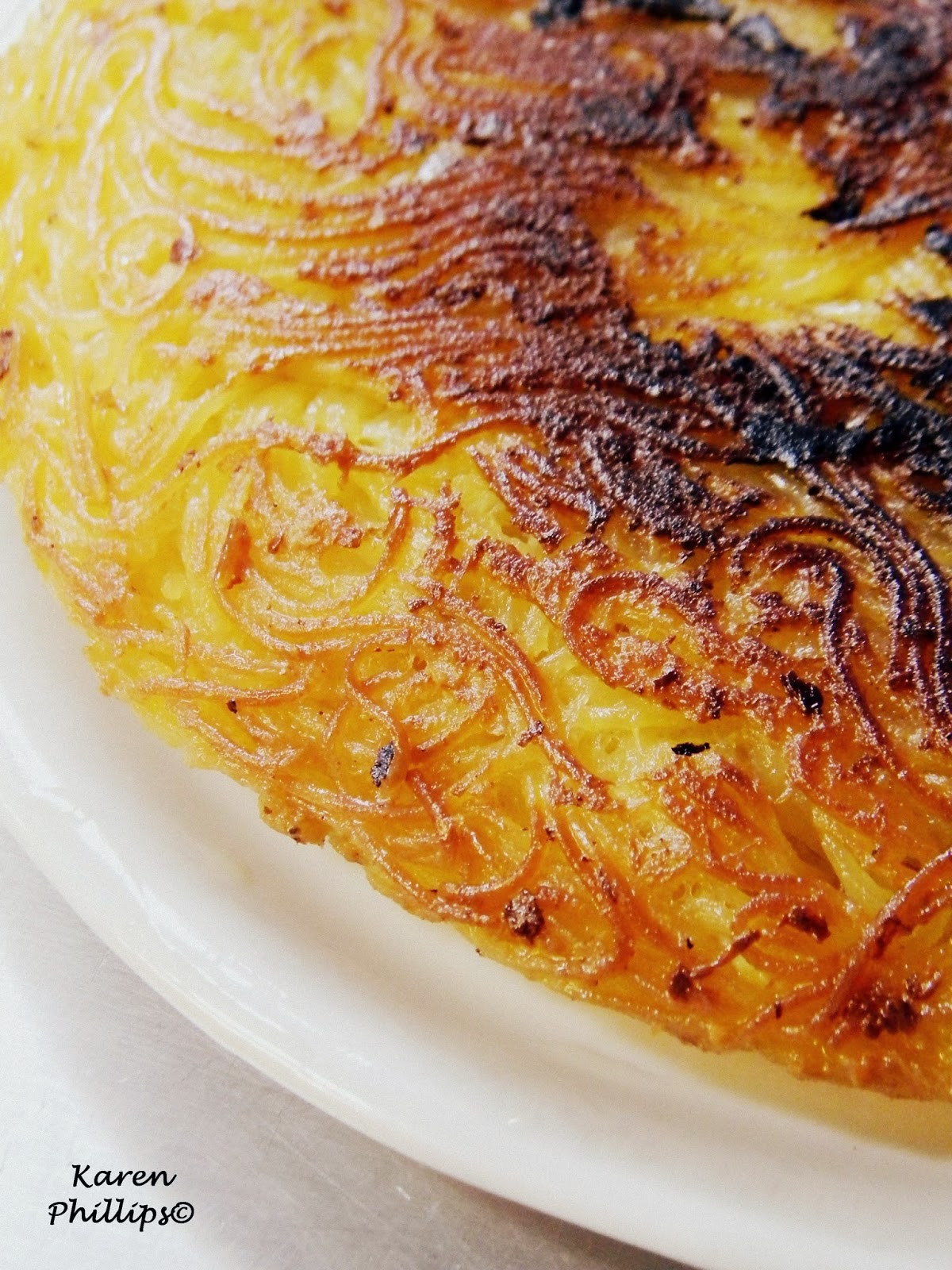 Chef Michele Grande's eyes lit up when I saw him a couple of weeks ago and asked him about traditional Carnevale recipes that he enjoyed as a child. Those same eyes even seemed to dance  a bit when he the conversation turned to migliaccio, a Neapolitan carnivale custard that he would devour when prepared by his mom, Sigrnora Maria Cristina.
The classic Neapolitan recipe calls for semolina and ricotta cheese, but in Bacoli - Chef Grande's hometown - they prepare it a little differently.  I was curious, so the chef suggested I swing by La Bifora and get a sneak peak at his childhood migliaccio memories.


So, there I was, a couple of weeks later, back in the kitchen, ready to watch, take notes and of course...taste.  Chef Grande had already put the water on to cook the pasta.  In Bacoli, he told me, they use very thin spaghetti, not semolina. 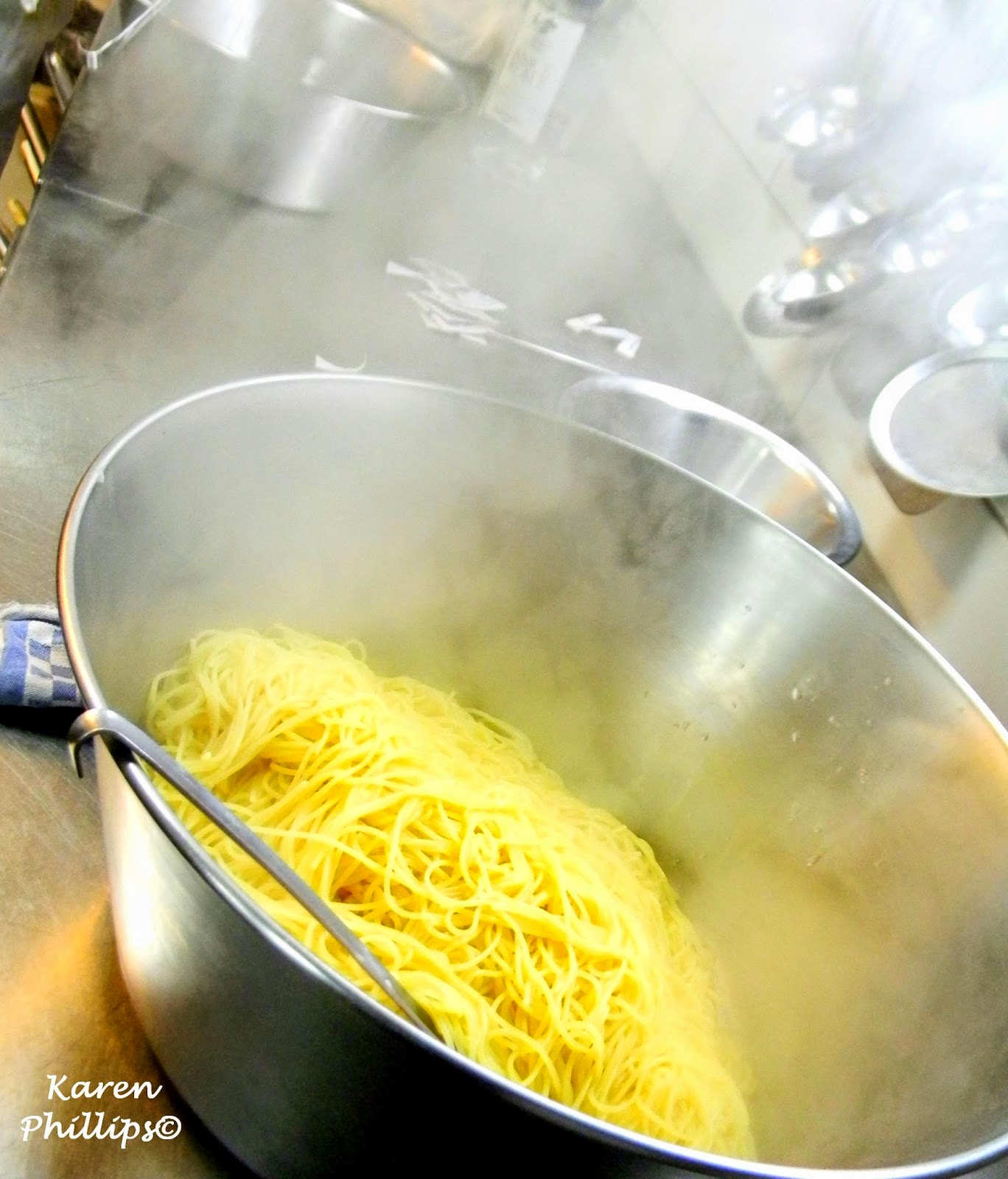 Cooked spaghetti was added to a bowl with sugna - lard.  Grande stirred while his mom beat eggs to add to the mixture just as it cooled down. 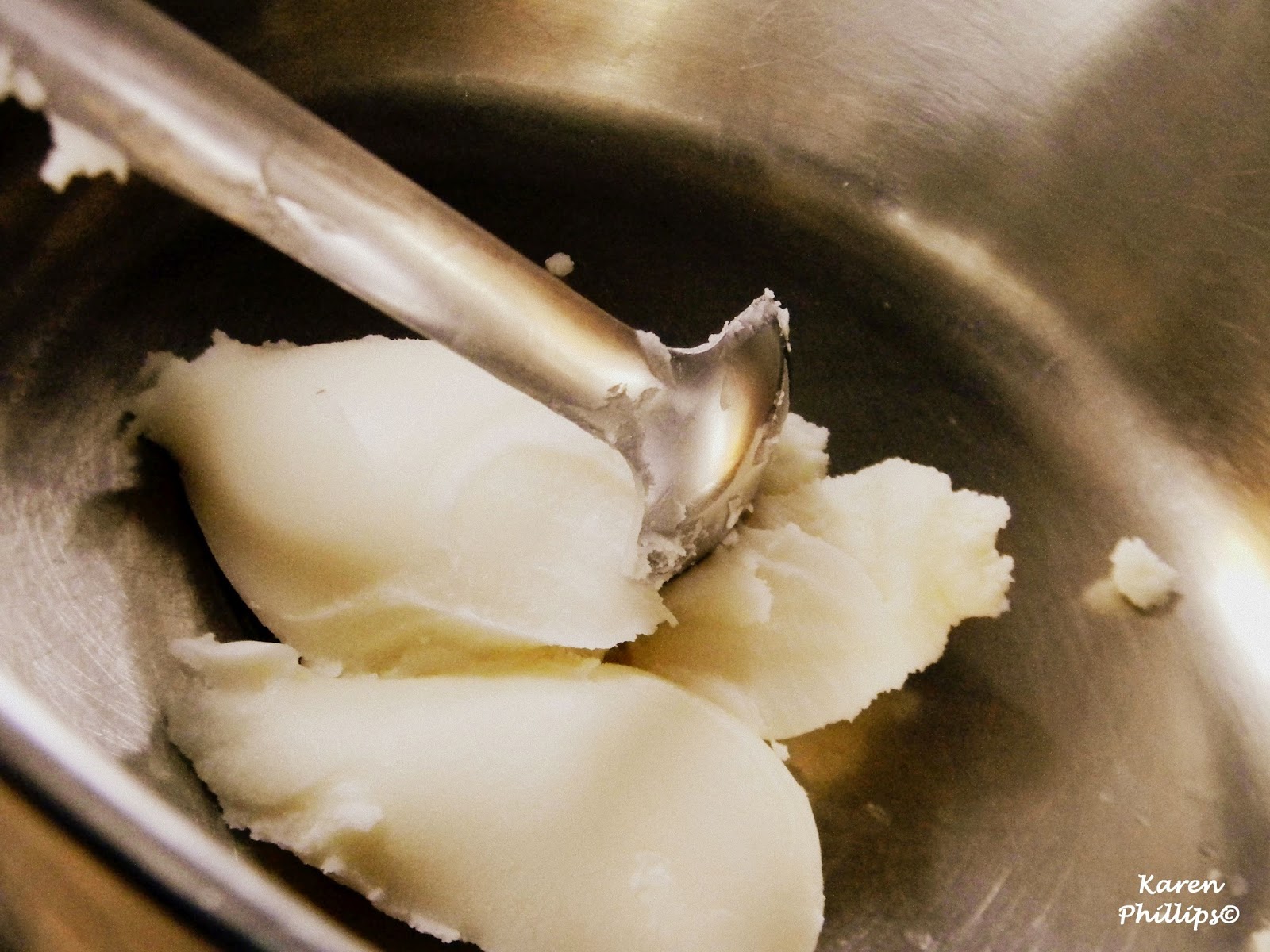 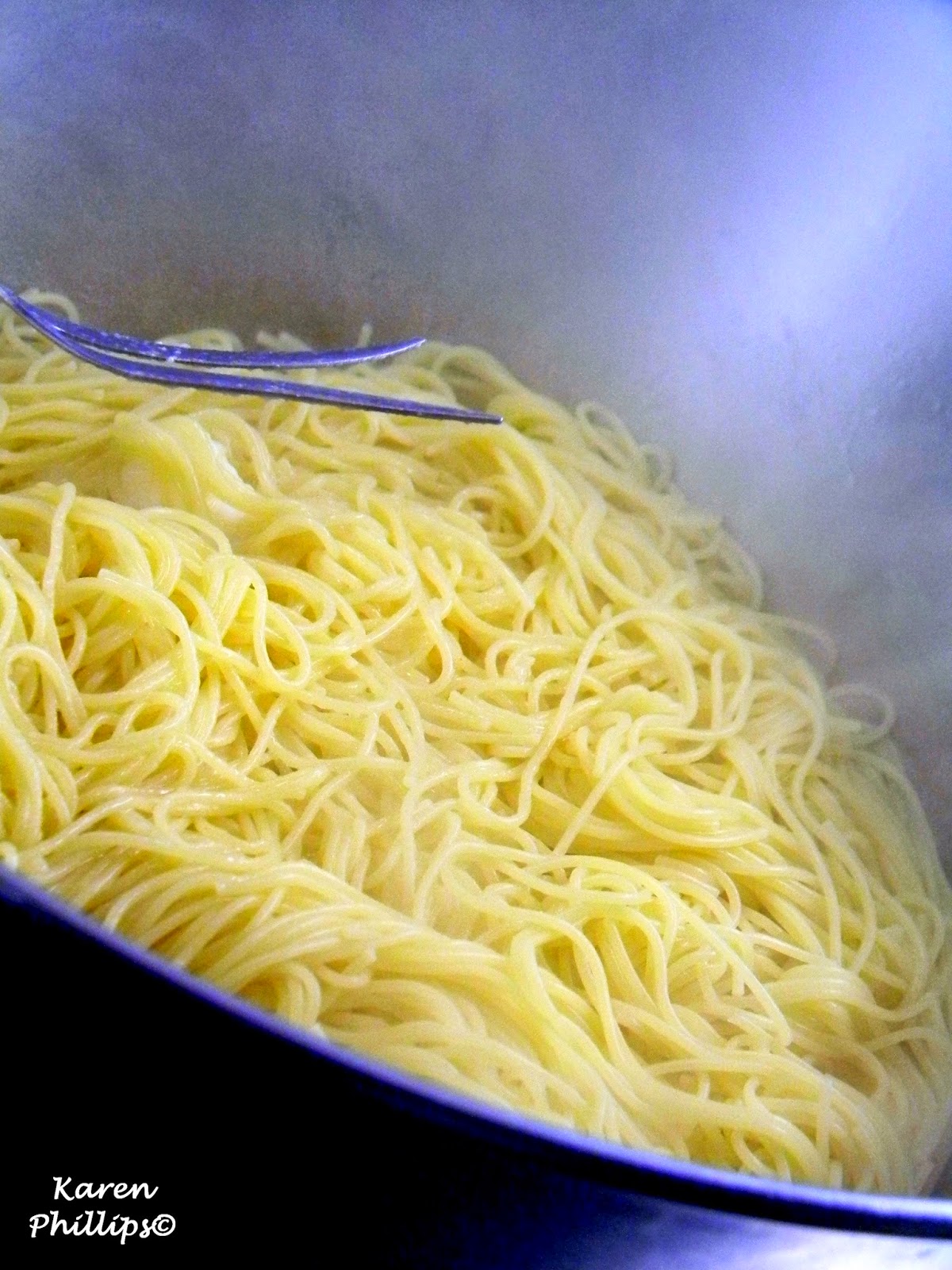 Then?  Eggs, a bit of sugar,  anise liqueur, limoncello, and vanilla were added. 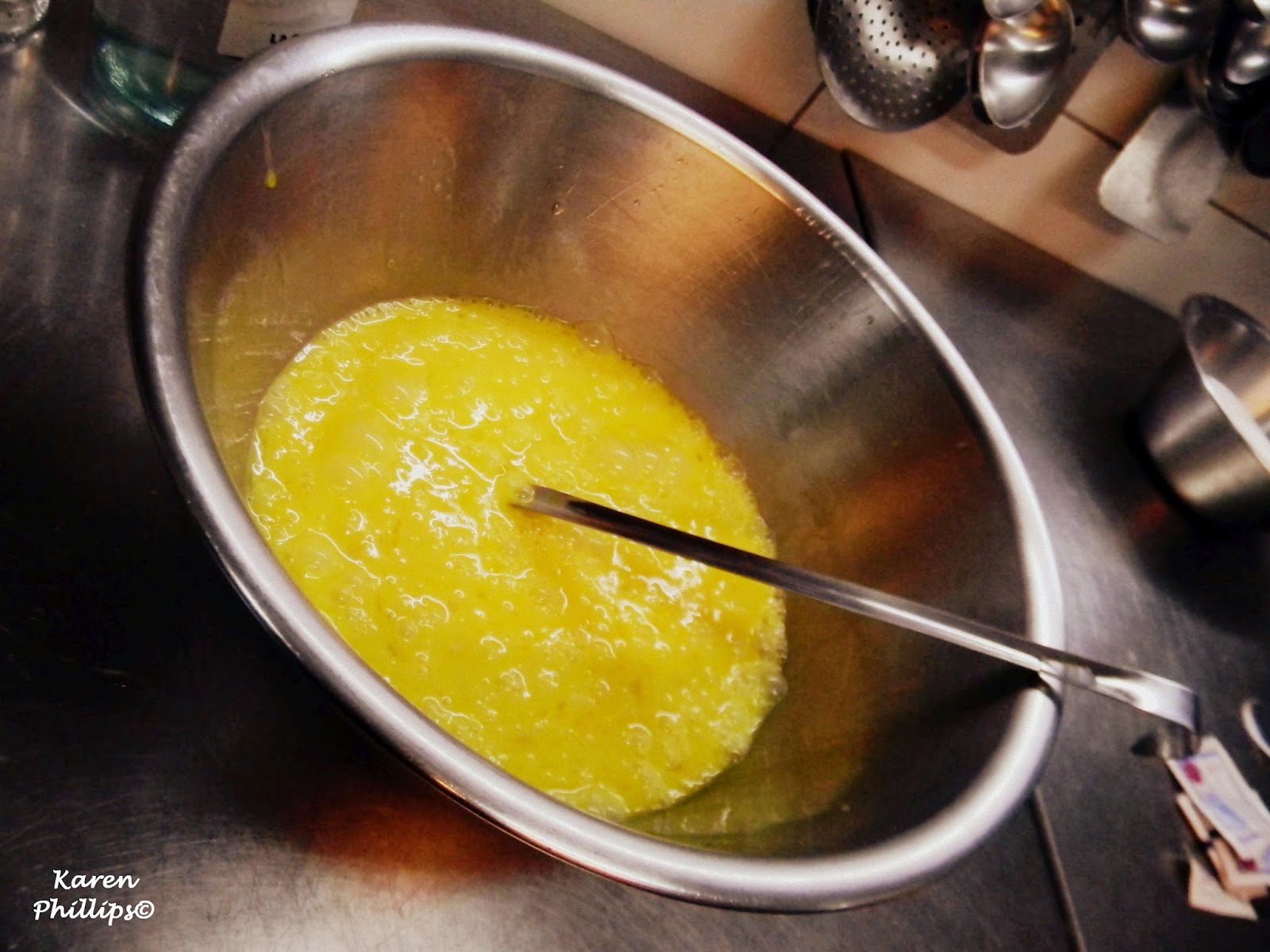 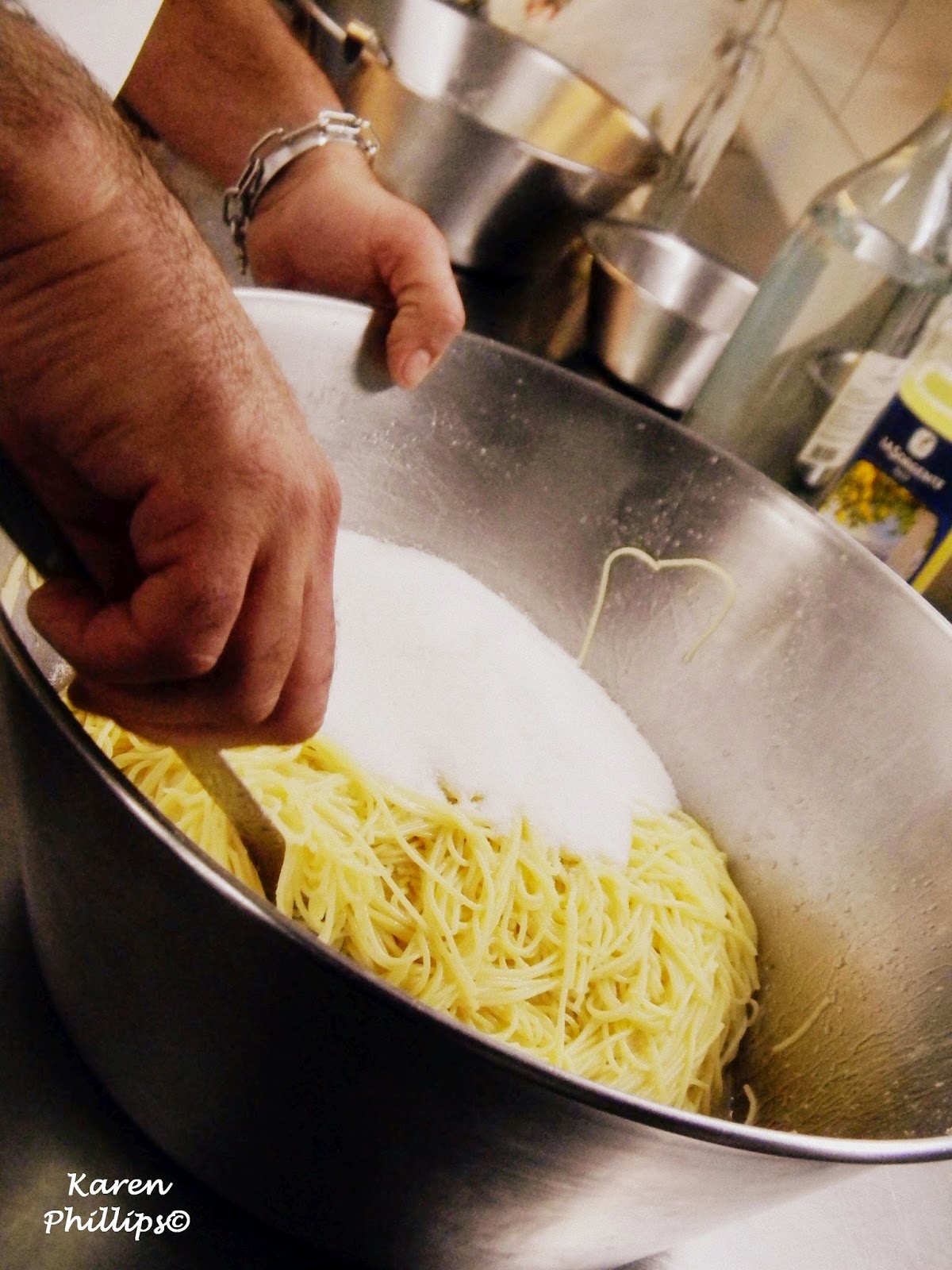 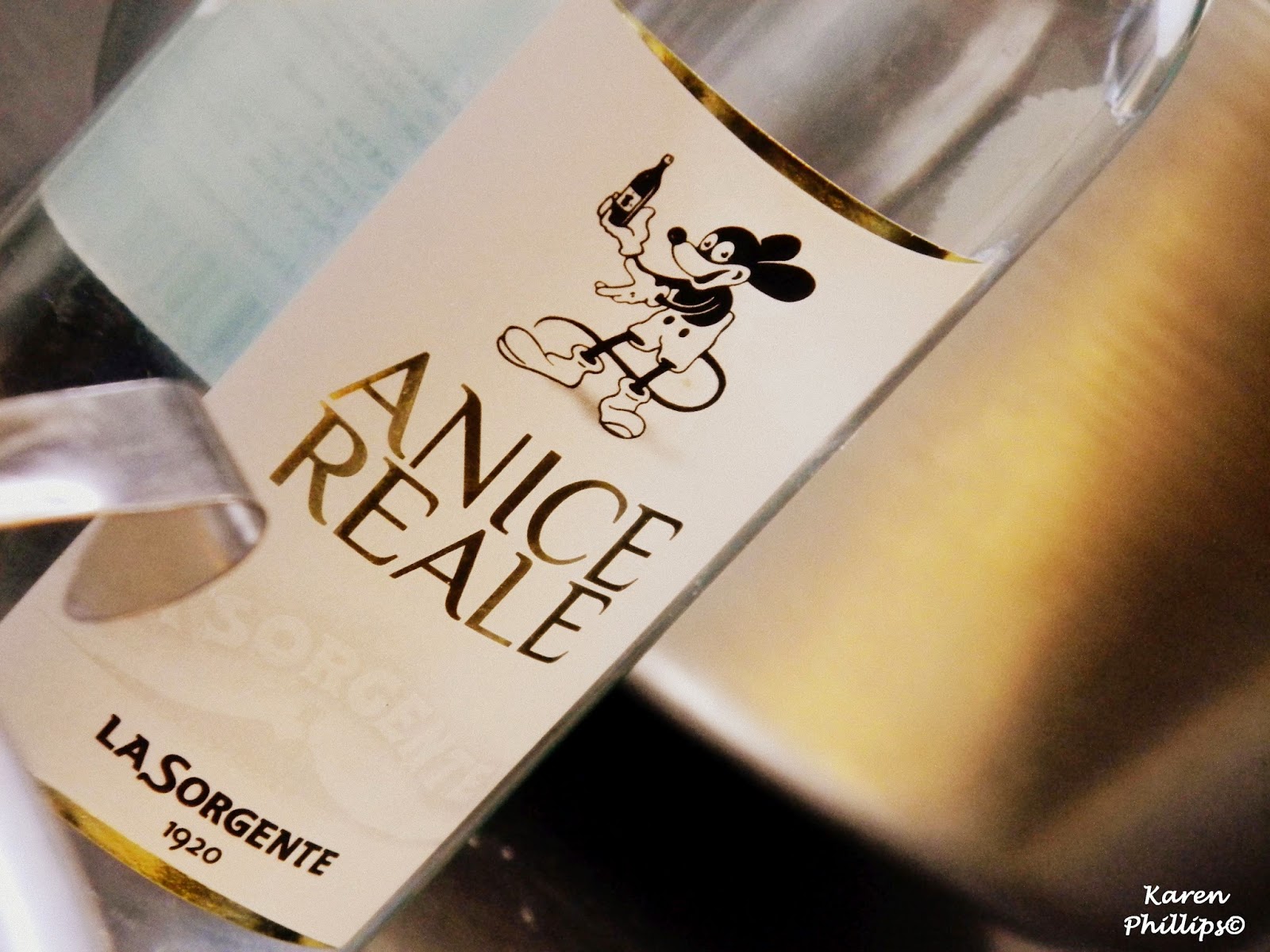 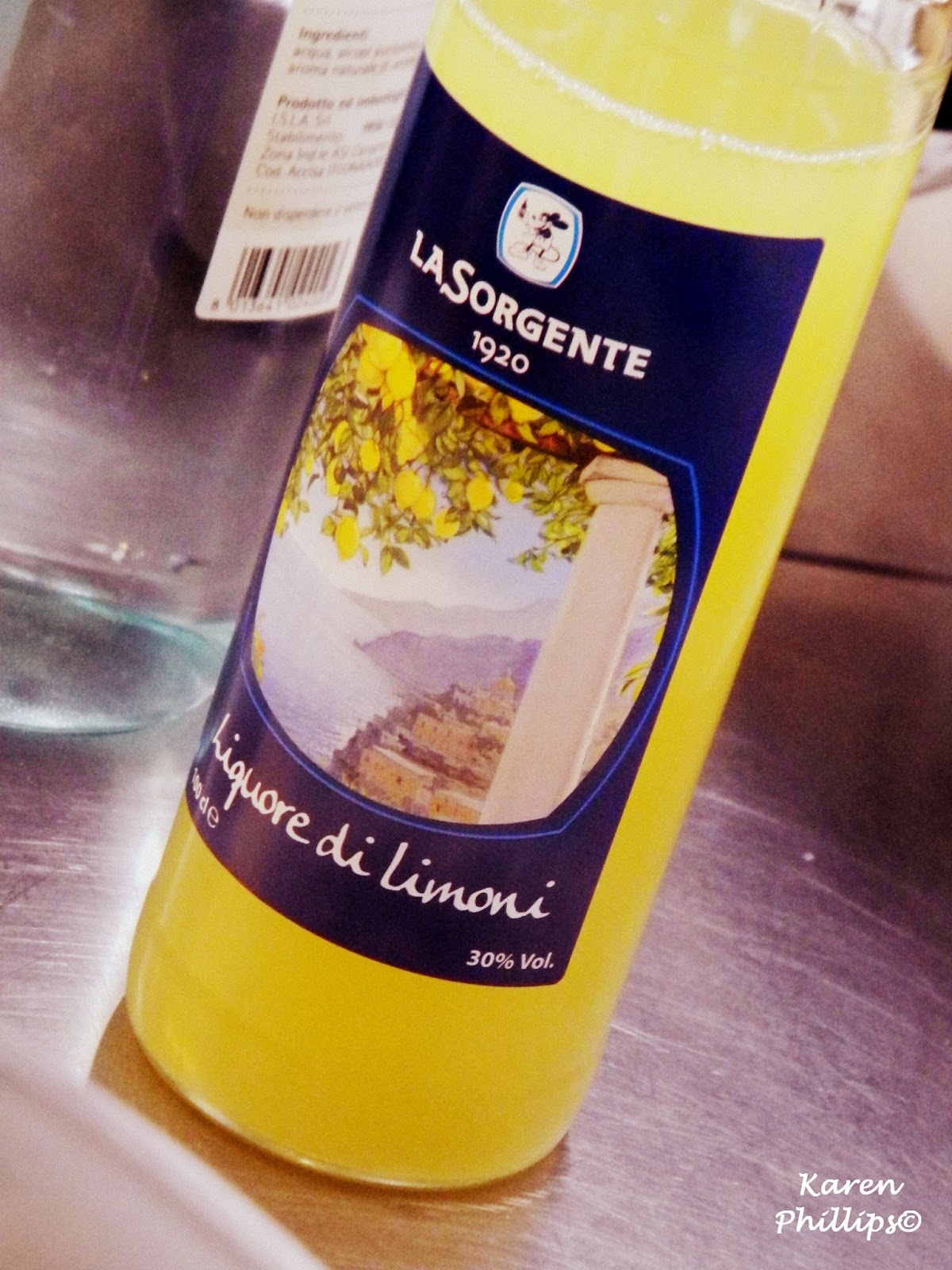 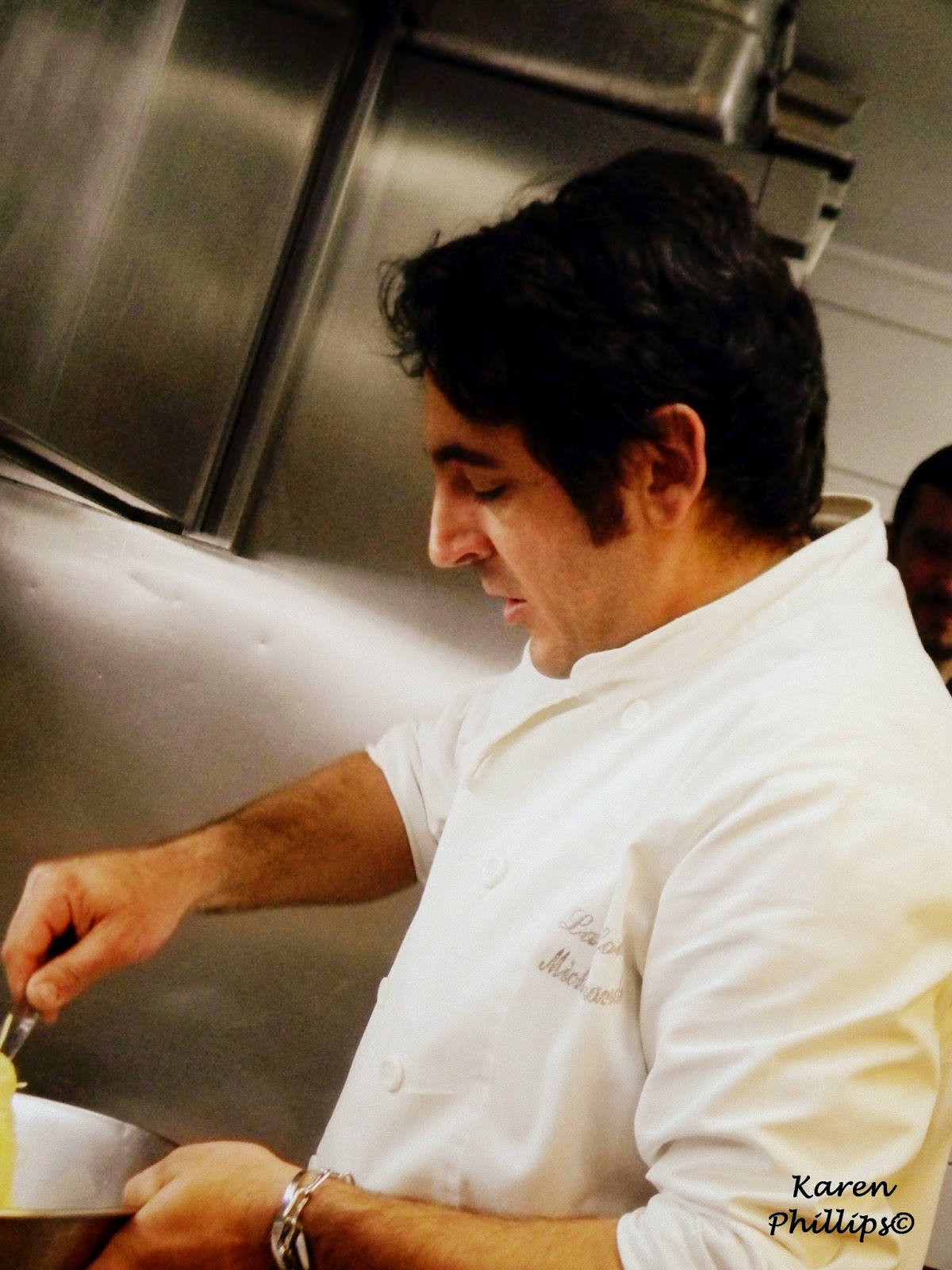 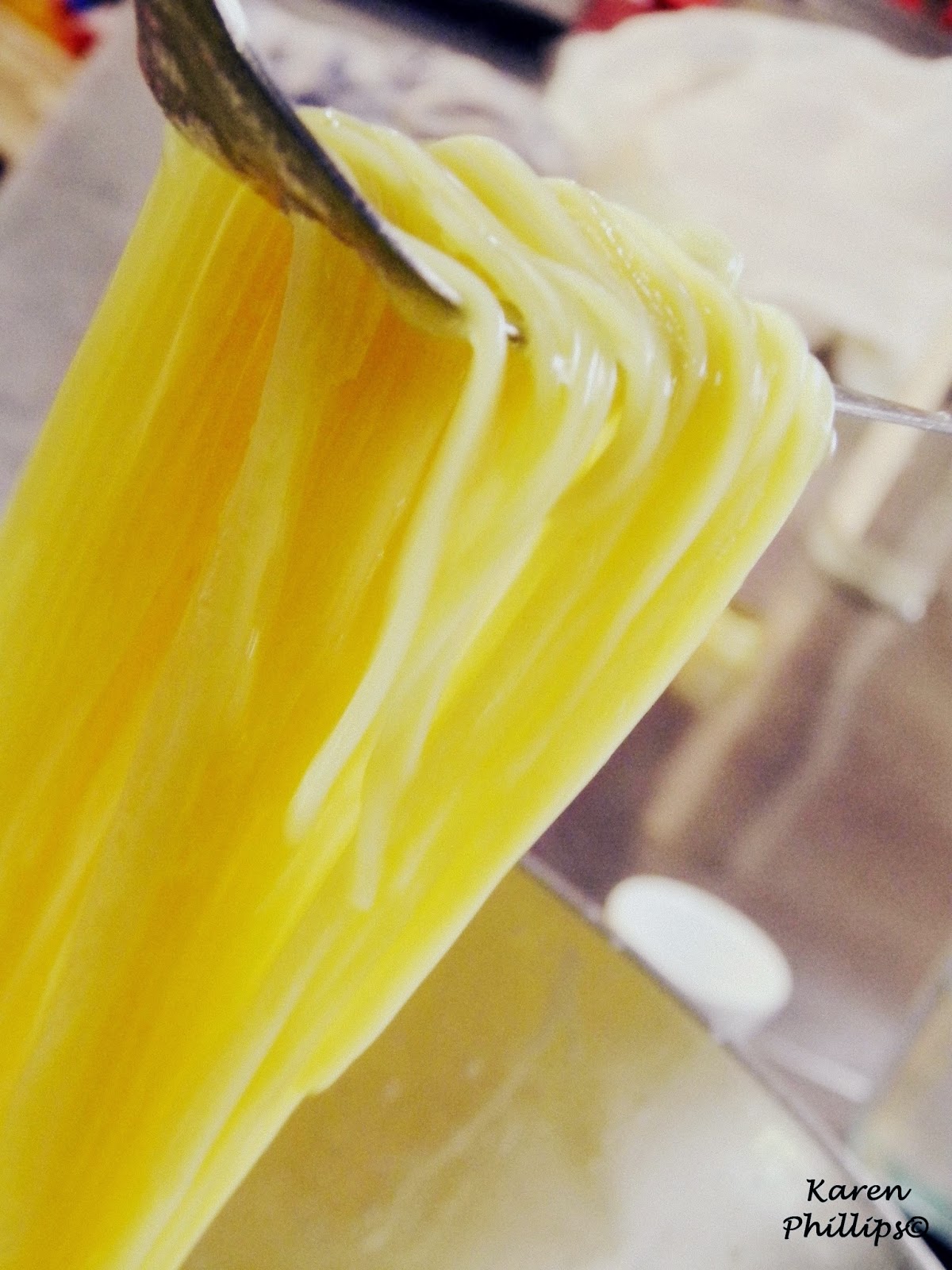 Amazing aromas wafted up as Grande continued to stir and stir and stir. Until finally he and his mom were satisfied.  It was ready to be cooked.  Signora Maria Cristina told me that some cook their migliaccio in the oven, but she prefers to fry it.

The procedure is similar to that of making a frittata.  The mixture is poured into an oiled non stick pan. 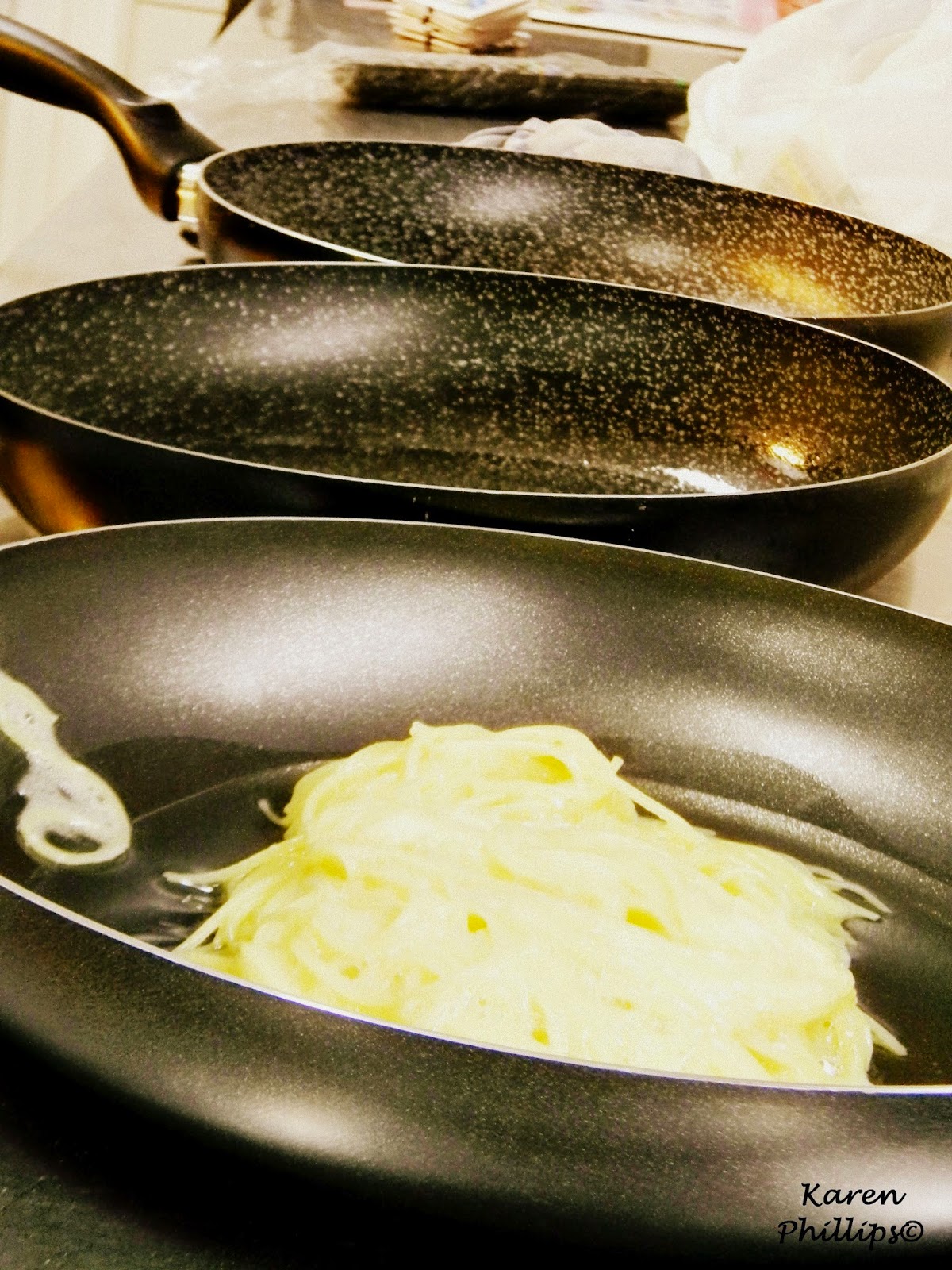 This is where experience comes into play.  Grande and his mom took turns checking to make sure they weren't cooking too quickly or  that they weren't sticking to the pan, 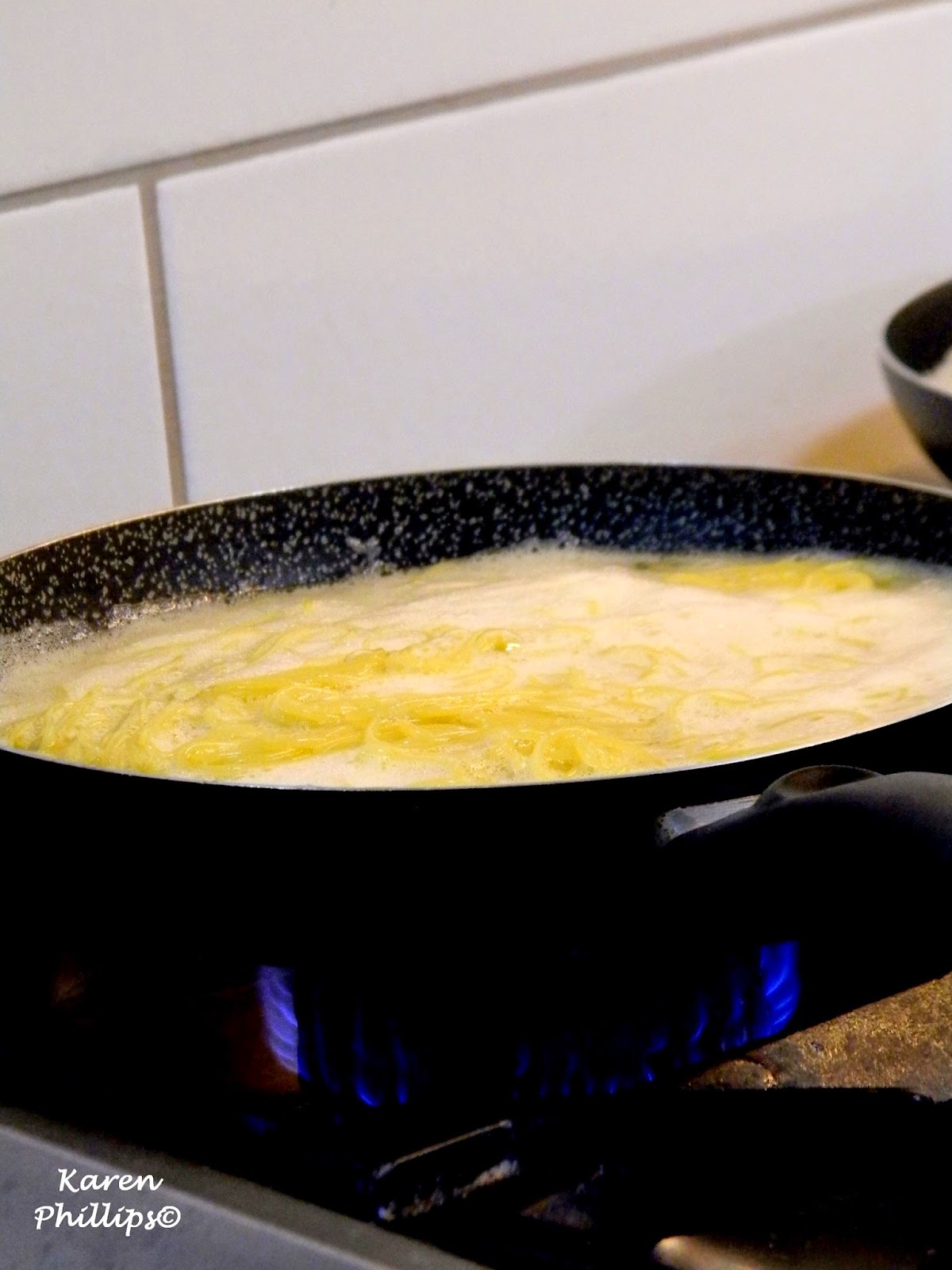 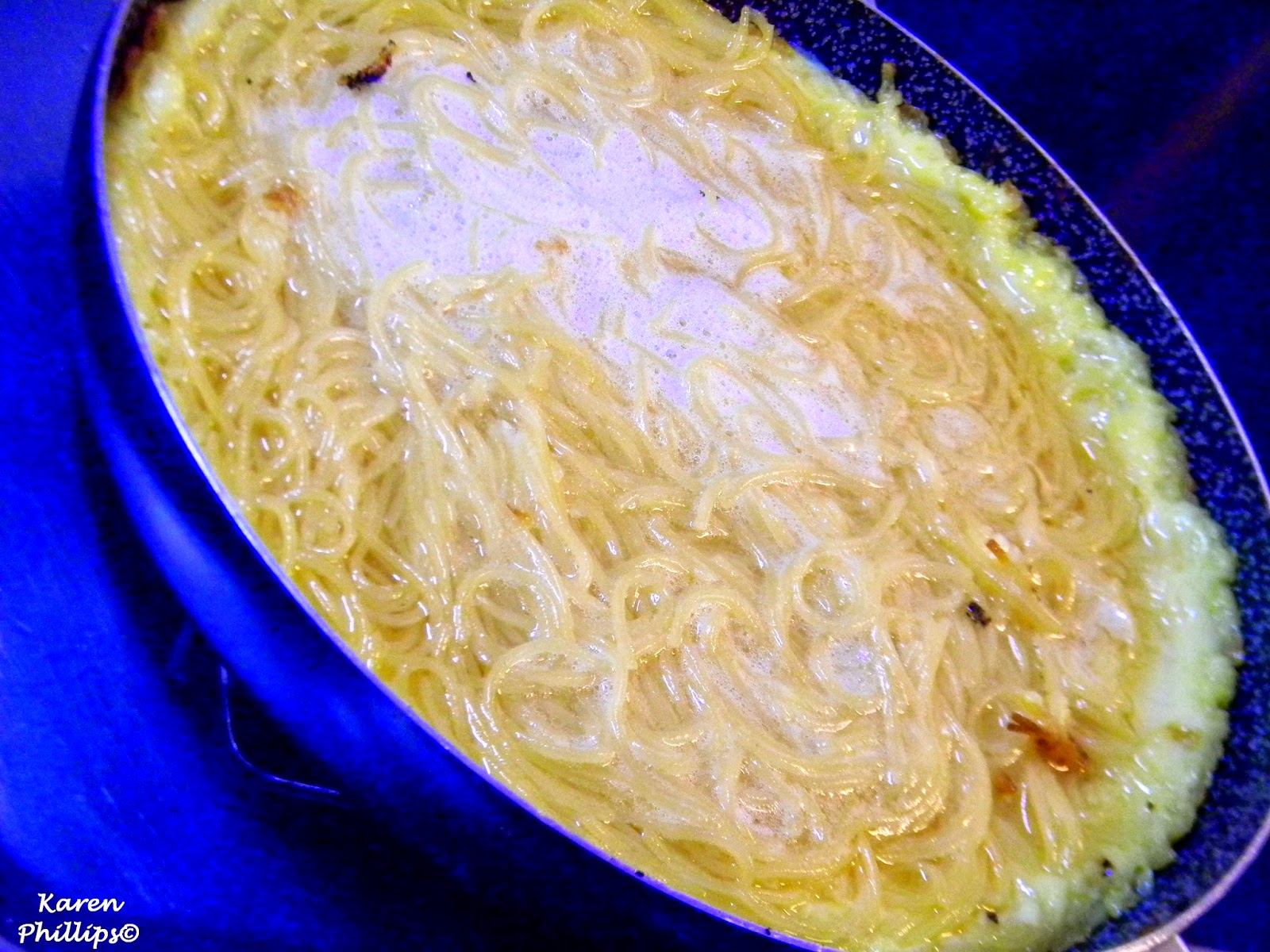 Then, when they were satisfied, Chef Grande flipped the migliaccio over with the help of a large plate so that they could continue to cook on the other side. 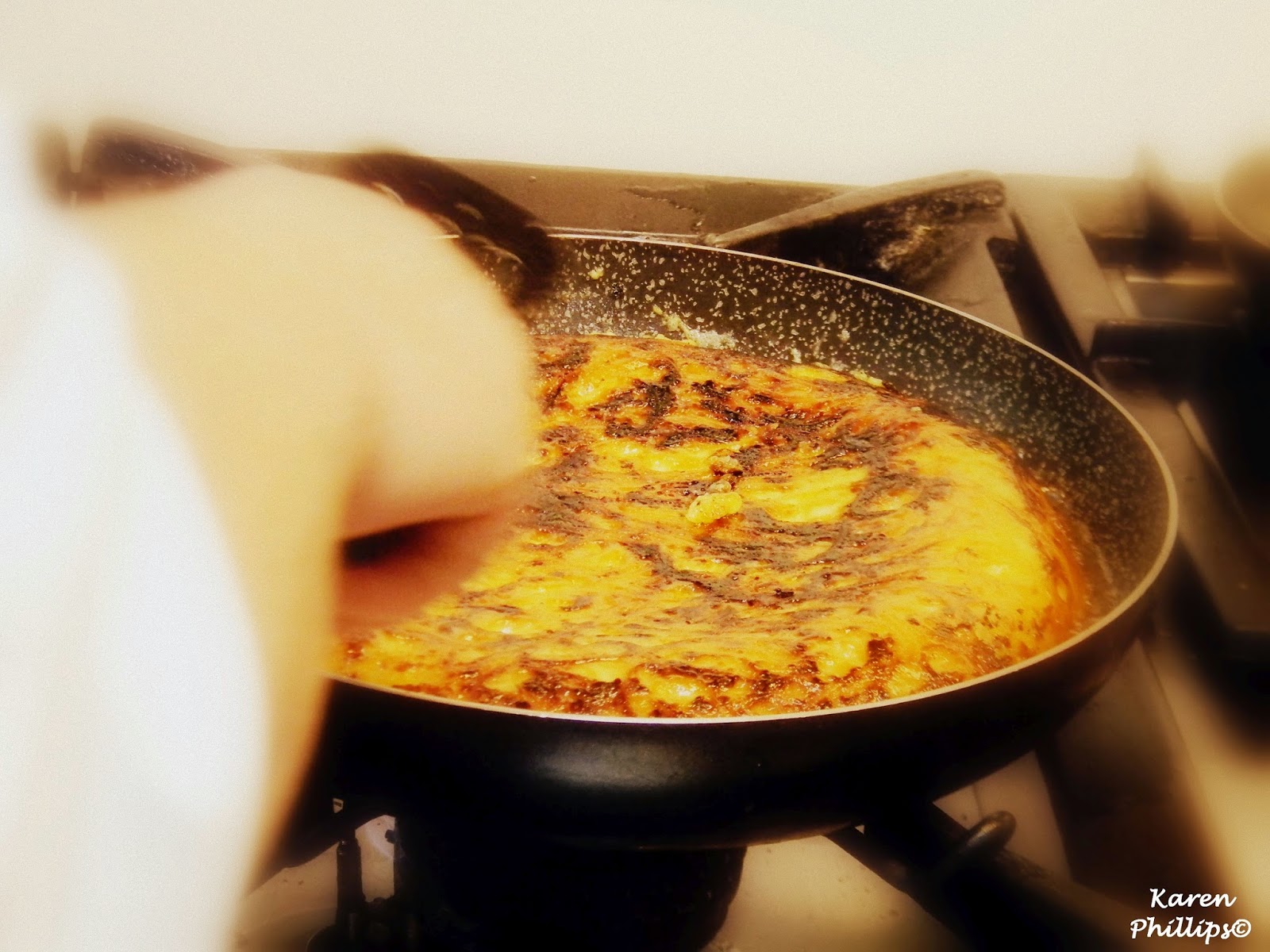 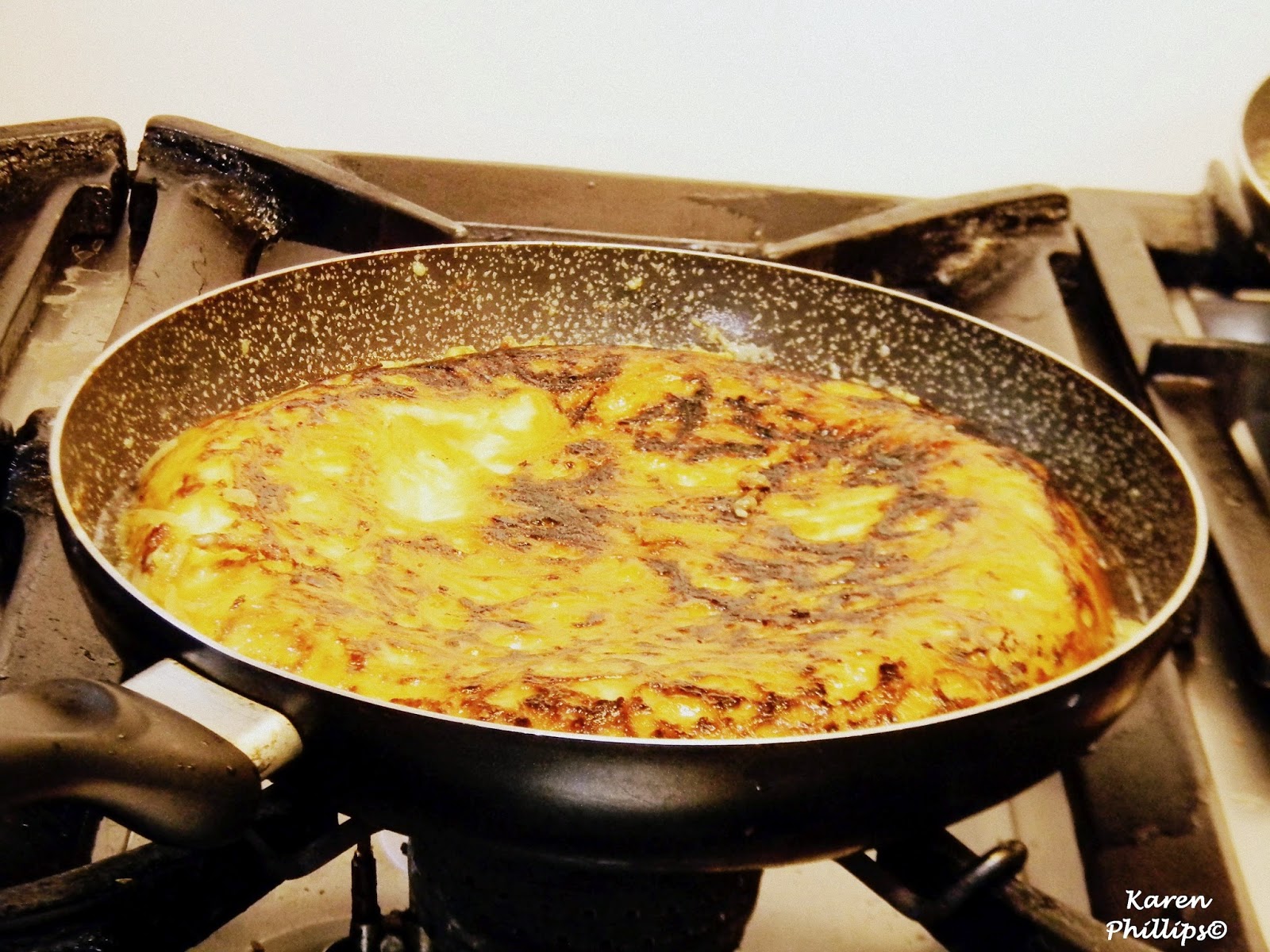 Finally the migliaccio cakes were ready.  As soon as they cooled down a bit, Grande added a bit of powdered sugar, cut me a slice, and  handed me a fork. 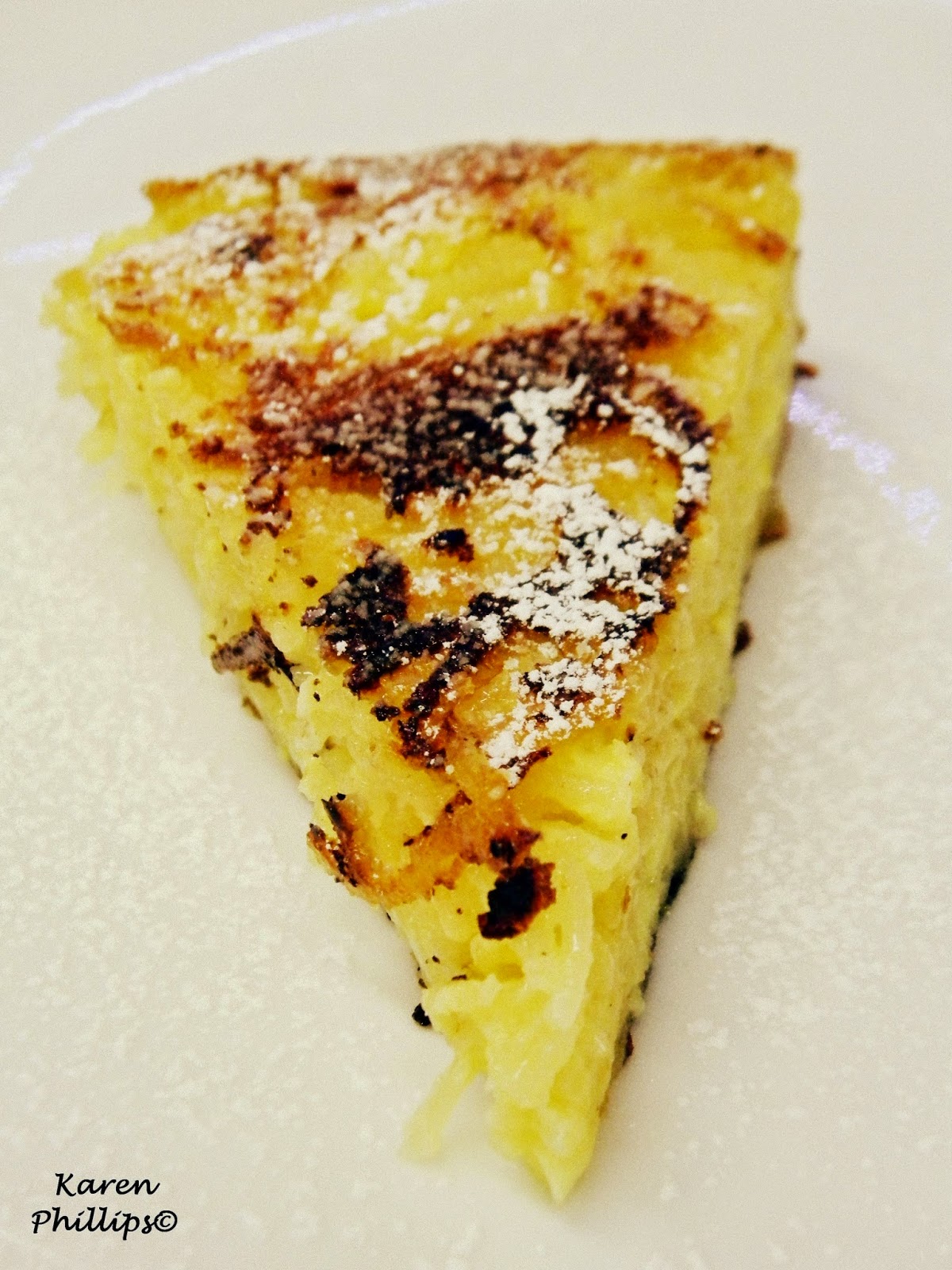 As he did, I was sure I saw his eyes light up as they had done a couple of weeks earlier...
No wait...
They were dancing.
And after a bite or two, I understood why. 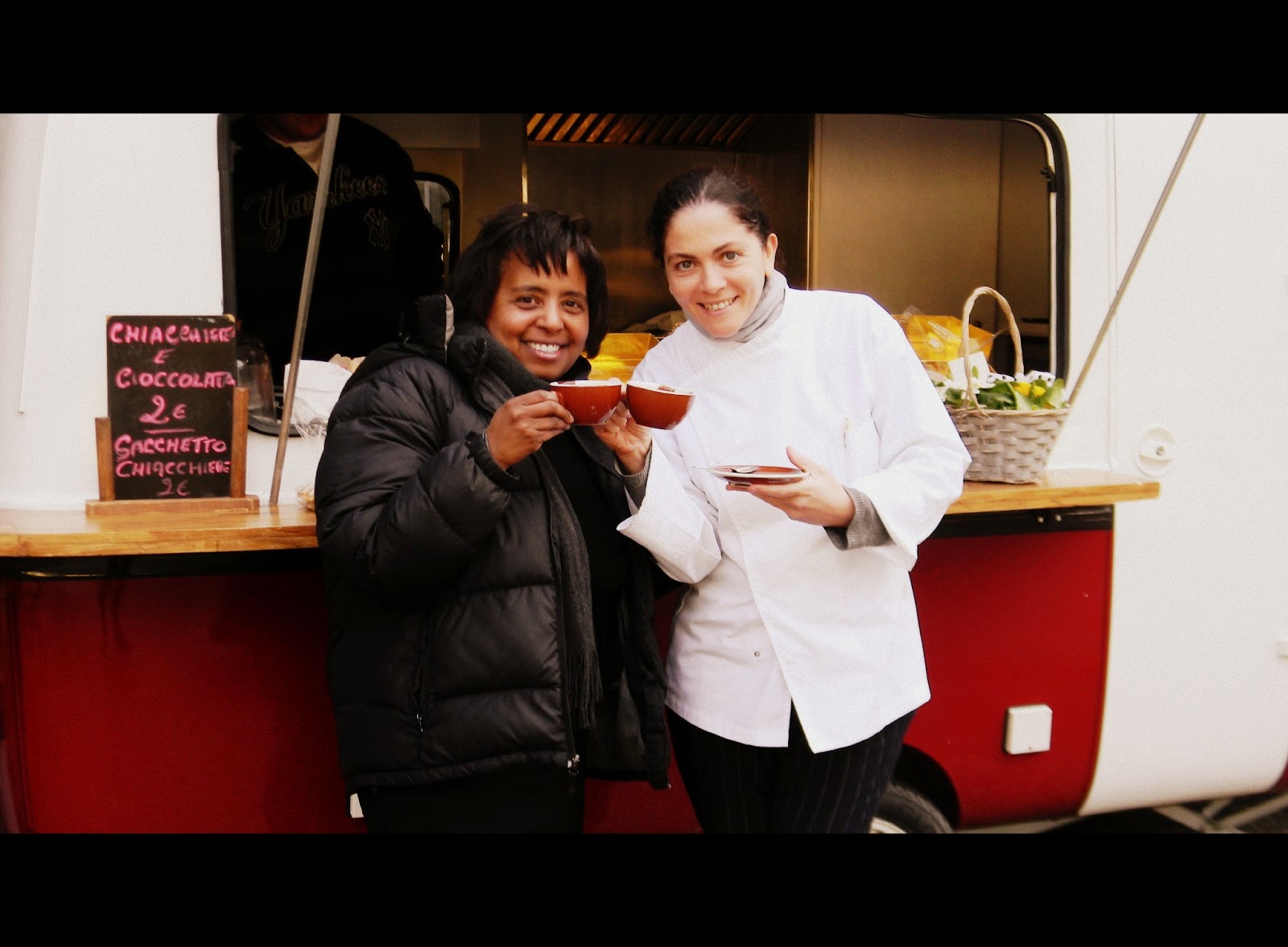 Last Sunday afternoon I had lunch in Caserta . On  my way back home, I decided to make a pit stop.  A pit stop which included a steaming mug of hot chocolate, you know...made with real chocolate.  A pit stop which included serving or two of chiacchiere; strips of fried dough sprinkled with powdered sugar. A pit stop at Le Colonne Restaurant, located a stone's throw from the amazing Caserta palace dating back to the 18th century.
There I met Michelin star chef Rosanna Marziale who came up with the cool idea of setting up a food trailer in the small piazzetta right in front of the family's restaurant.  And with a  super chic trailer on loan from a friend, Valeria Fusco, she decided to go for it.  Why not? It would be the perfect opportunity for Sunday strollers like me to stop by and pick up some of the restaurant's famous dolci, in particular Carnevale specialties such as castagnole (sweet dough balls)  or the chiacchiere that caught my eye. 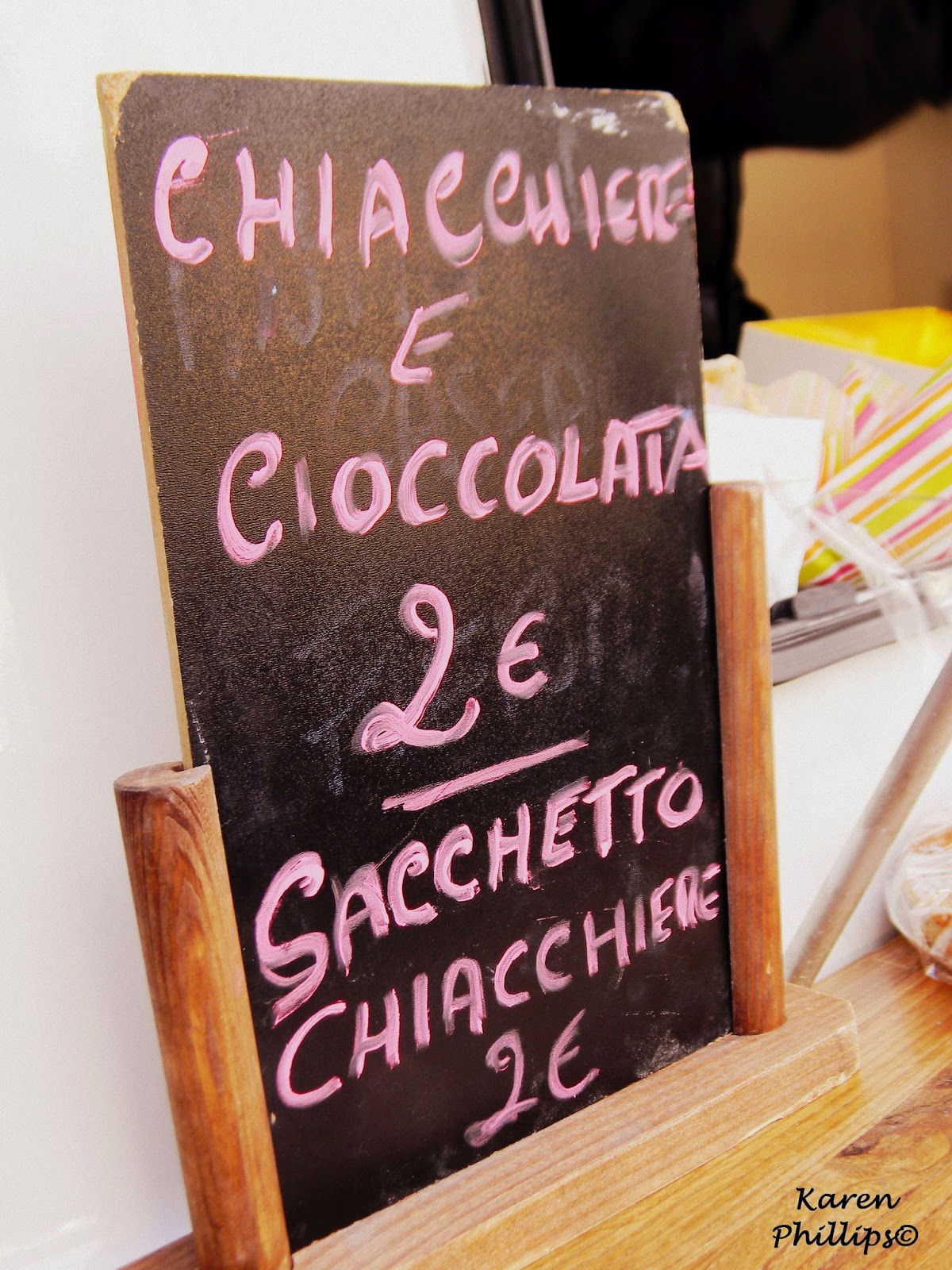 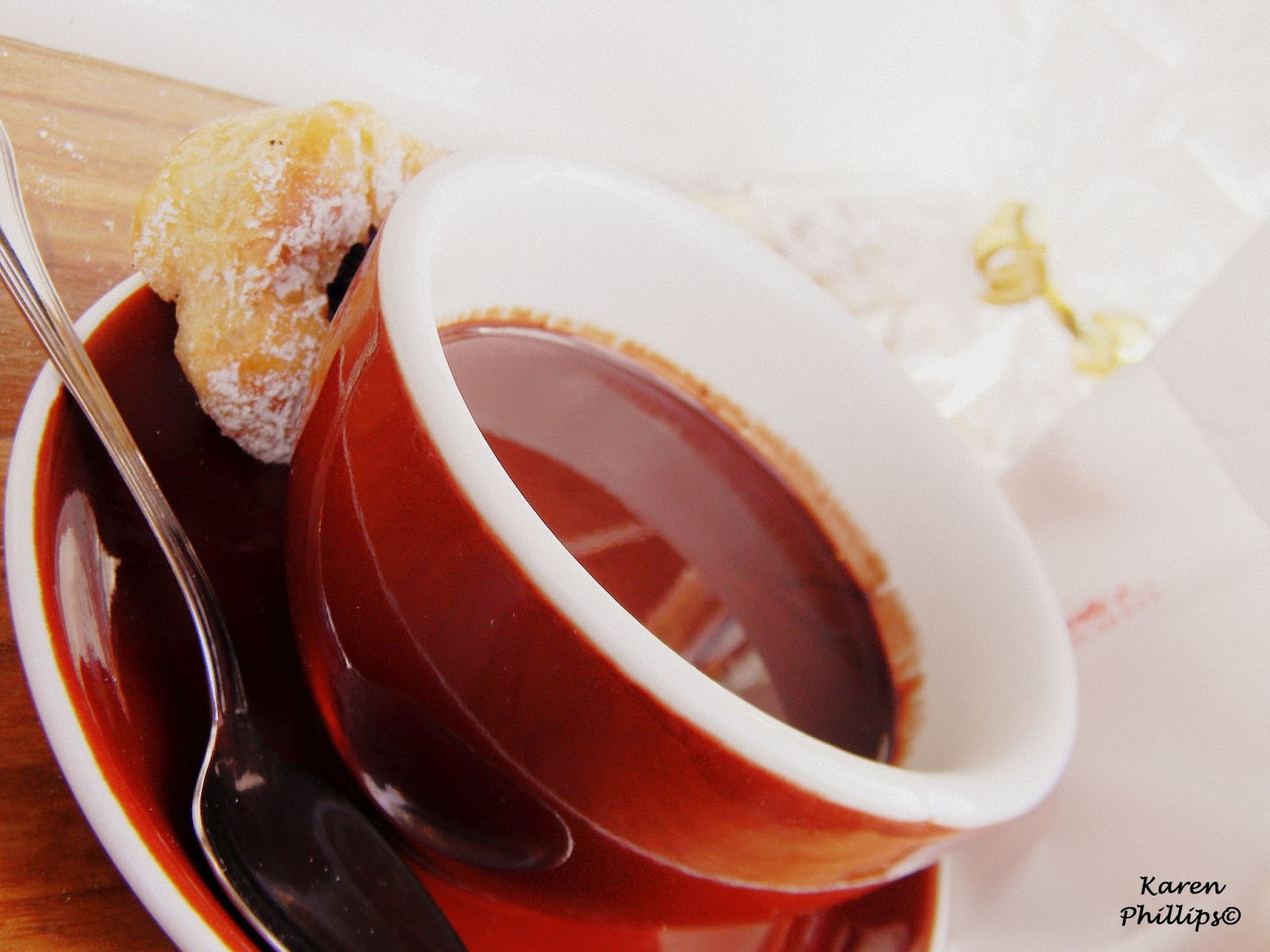 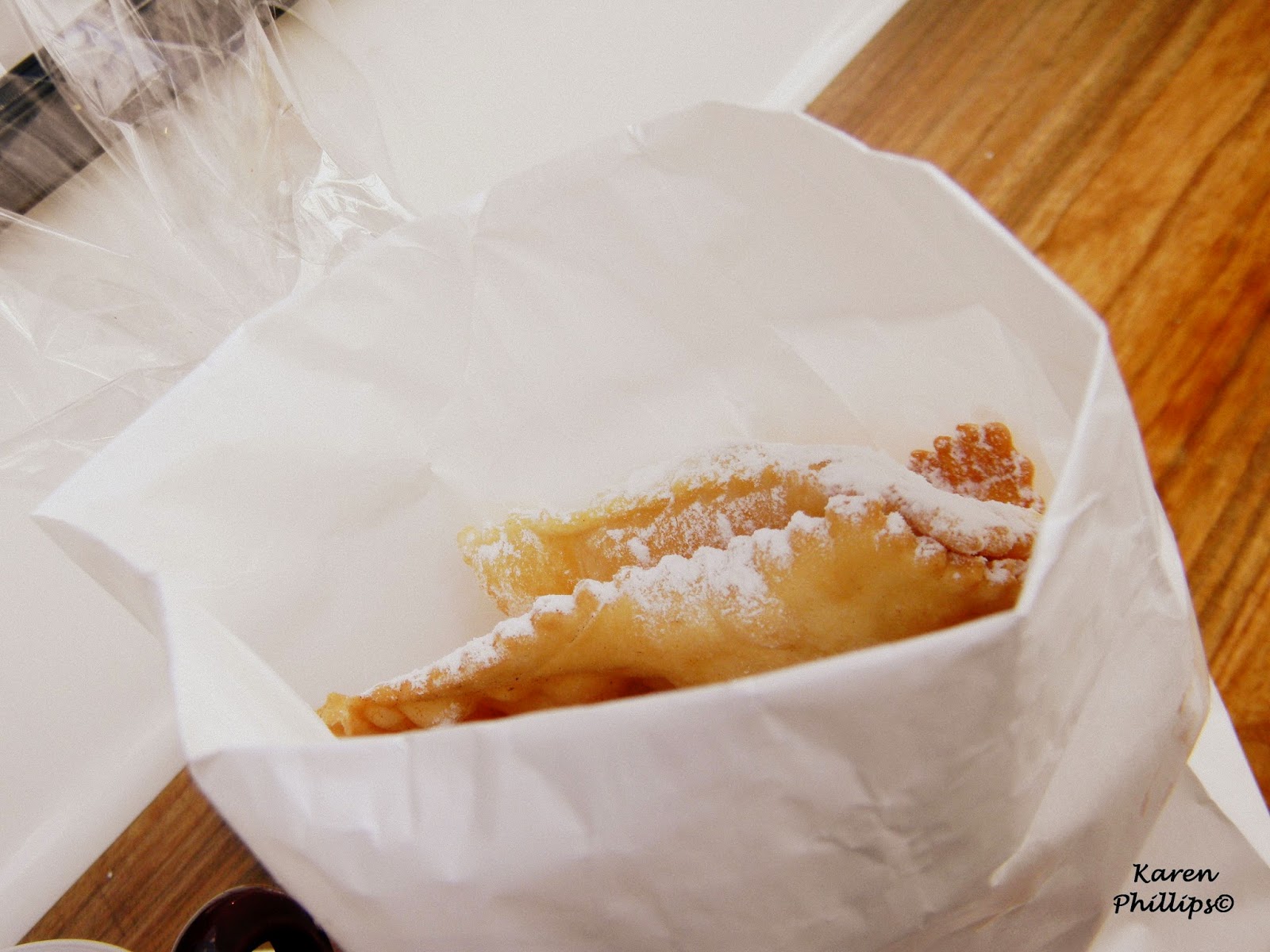 The future?
The sky's the limit for Marziale.
In the meantime, Sunday pit stops at Le Colonne Restaurant are highly recommended.

Posted by Karen Phillips at 6:31 PM No comments: 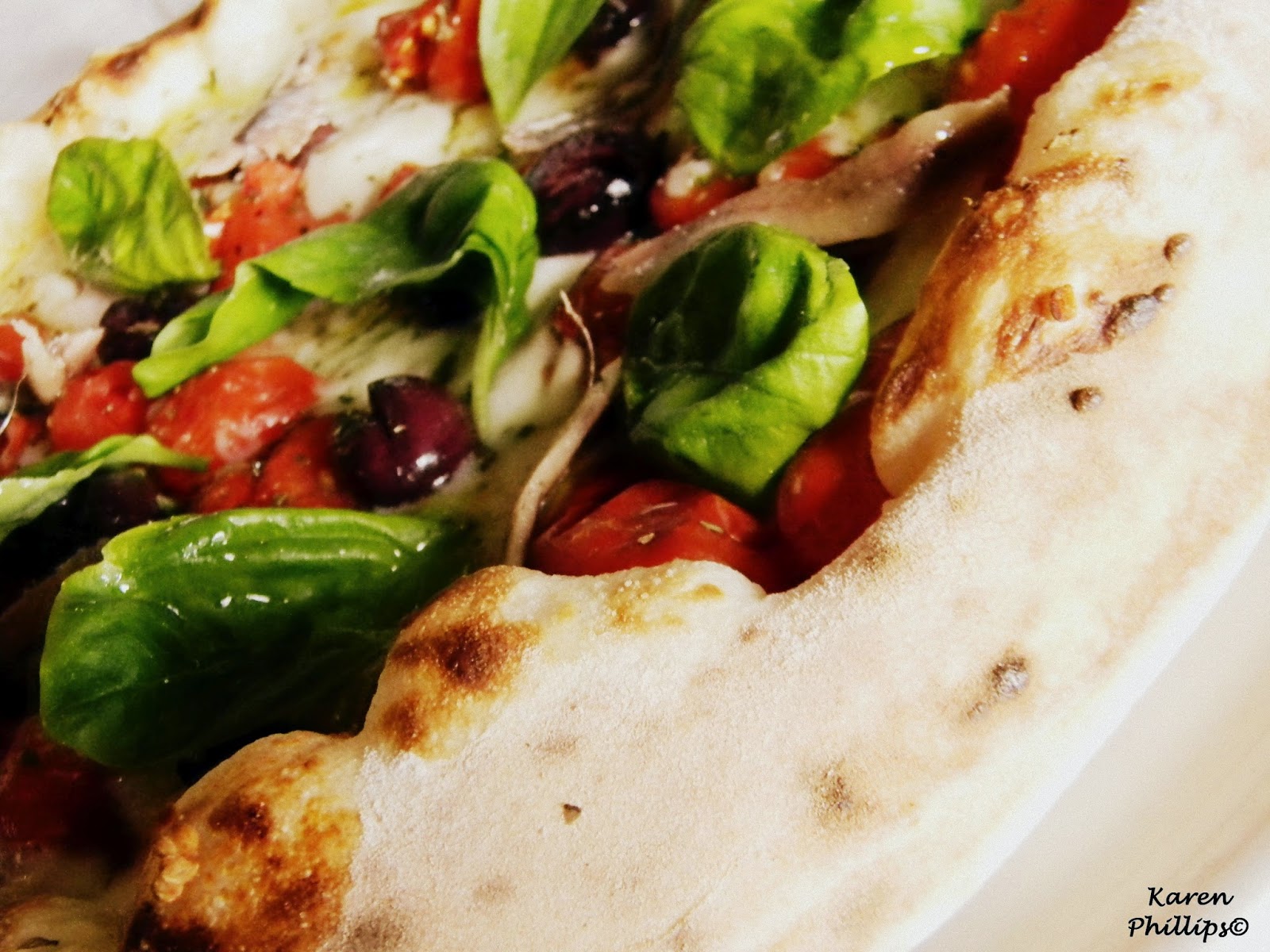 It had been raining for a week.  A cold winter rain, that honestly, began to get quite old for those of us who are used to that Napoli sunshine.  It was coming down quite hard with strong gusts of wind on that  Saturday afternoon as I confirmed my Sunday lunch reservation at Pepe in Grani in Caserta.  I hadn't seen Pizza maker Franco Pepe since last summer, and quite honestly I was looking forward to going back to visit a friendly pizzeria that serves some of THE best pizza in the country.
Caiazzo is about an hour's drive from my home  and as my son and I hit the road that rainy cloudy morning,we were already thinking about which pizza we wanted.  My son loves the classics, so he wanted a Margherita.  I, instead, was still a little undecided.
Undecided until the sun came out...and that strong wind that was blowing managed to push the grey clouds away.  As we parked our car and headed towards the pizzeria in the tiny centro storico I had made up my mind.
Il Sole nel Piatto, I said enthusiastically when Pepe asked me what I wanted for lunch.  Sunshine on a plate!
A pizza topped with tomatoes from Mt Vesuvius, oregano from nearby Matese, black olives from Caiazzo, anchovies from Cetara (where else :-) ), and fresh basil.
Top ingredients gathered together on Franco's famous pizza dough.
What a day of Sole...nel mio piatto!
Posted by Karen Phillips at 6:38 PM No comments: