My first baby steps into the blog world were those as a wine blogger.  I loved walking through vineyards, speaking with producers, tasting wines with professional journalists, and attending wine events such as Vinitaly.  In fact, it was that way back in 2012 in Verona I tried a wine from Lunarossavini.  Quartara 2008.  A fiano, that I learned was fermented in amphora.  Amphora? I asked myself.  For me it was the first time I tried a wine of that type.  I will never forget, however, the brilliant straw yellow color of that glass.  Nor the message from enologist Mario Mazzitelli a few days later who 1) apologized that he wasn't at the stand when I stopped by and 2) invited me to taste some wines in his winery Giffoni Valle Piana in the Salerno province.
Well, I time went by learned and appreciated a crucial and  important point, that wine was meant to be paired with food.  Over time, my visits to wineries, ahime', were few and far between in exchange for visits to some of Campania's top restaurants.  And on those restaurant's wine lists, I noticed over and over wines form Lunarossavini.
So I thought - wouldn't it be great to combine a visit to the winery with one of my best friends - who is also a chef?  A fusion of fun.  A wine tasting gone wild...so to speak.  Wine tasting as it should be. Unpretentious.  With friends - where you learn about the wines, the territory, food.  And, magari, have a good, no, great time!

When I arrived at Lunarossavini- that late Saturday morning, I was greeted by Mazzitelli.


Mazzitelli, enologist and owner of the winery took me right into the cantina to show me around.  The winery has been around since 2006 - after years of Mazzitelli working for other wineries throughout Italy and Europe.  Here's a fun fact - Lunarossavini is the first winery in Campania to use amphoras.  To Mazzitelli it seemed natural.  The ancient Romans used them...why shouldn't he?  They have many benefits over  wood barrels - especially for a Fiano -porous, a longer life.  Mazzitelli gave me a quick run through of how his wines are produced,  His Quartara, for example. 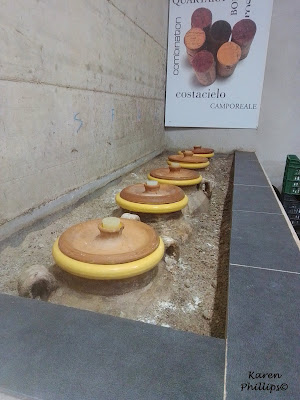 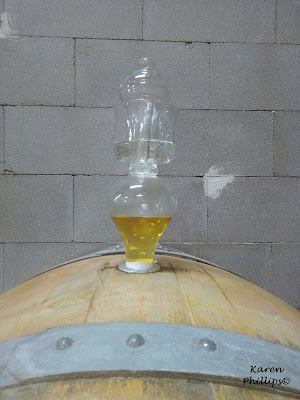 A fiano grape grown in clay rich soil is harvested in rounds.  The first beginning in August.  A series of grapes that are macerated and fermented in amphora, then passed to barrels, then eventually bottles.  As he was explaining the similar vinification  process for his Borgomastro Aglianico wine, 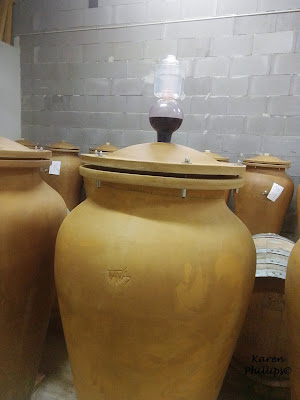 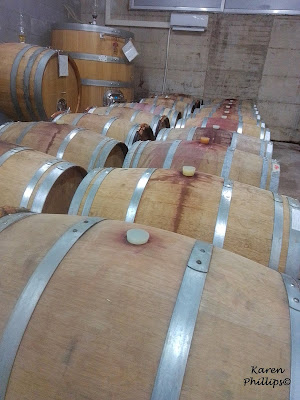 that is when 'the chef' arrived - Angelo Borghese of the nearby Settanta Neo Bistrot. It was time to get wild.

Wines deserve a dish to go along with it. During a series of appetizers prepared by Borgheese which included algae chips with tuna, tasted bread with butter and anchovies, cheese and various deli meats, we had a chance to try a range of Lunarossa wines...
Costacielo 2018 - red, white and rose'.  The winery's  base wines, even if I hate that term.  Fiano and aglianico wines fermented in steel tanks and aged in amphora. 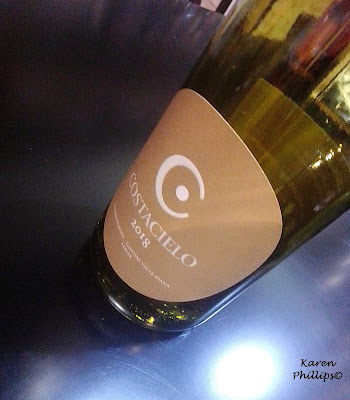 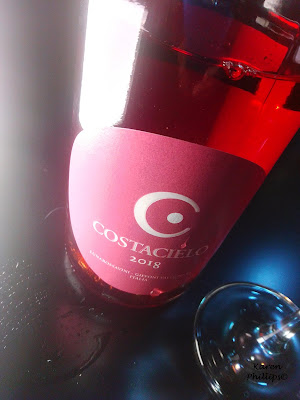 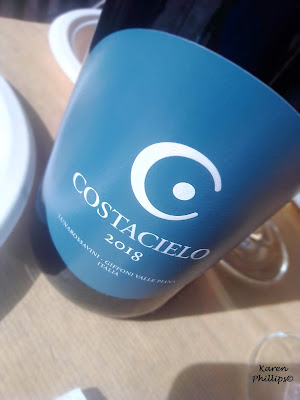 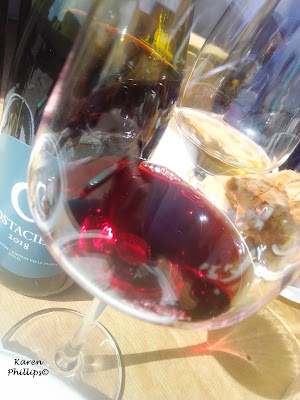 Rossoamarea 2012 - an aglianico with a small percentage of primitivo fermented in steel tanks, then long termed aged in barriques (reds need a bit of wood) and then bottled. 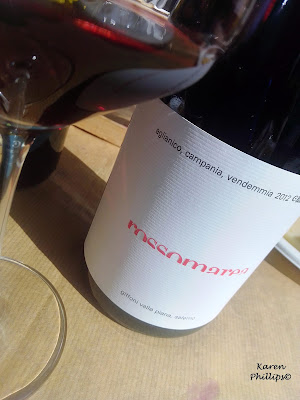 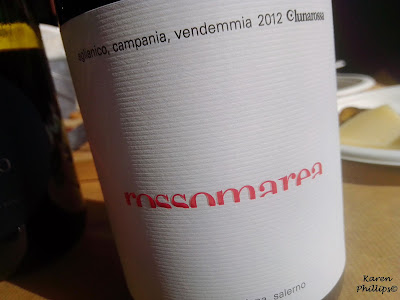 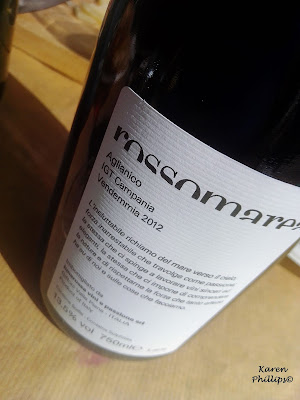 Borgomastro 2015.  Aglianico wine - fermented and macerated in wooden barrels for about 30 months, then aged in bottles for one year. 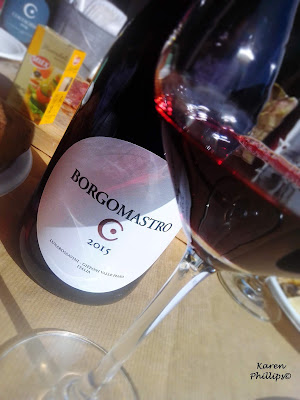 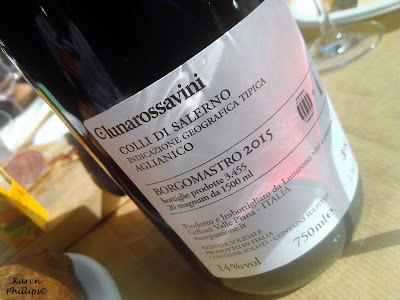 Then- it was time- to tatste Quartara with Mazzitelli nearby. And he did not disappoint- we had some time to make up!  I had the chance to try 3 vintages, 2017, 2014 (paired with Borghese's tortelli with genovese) and a 2013. 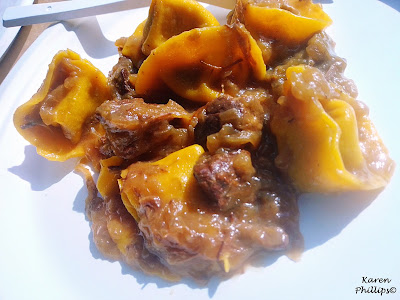 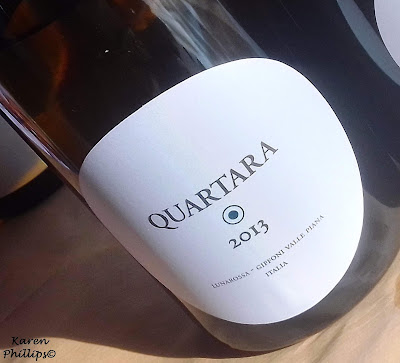 A wine tasting gone wild.  Wine tasting in the company of friends, where you feel free, have fun...and yes, learn something about a territory that maybe you did not know about. There was also a chance to try Lunarossa's Fuorilinea - a moscato orange wine, that was macerated and fermented in amphoras. One of the beautiful things about this wine, besides the taste and aromas, was that the 1,250 labels for the bottles are designed by children AND a portion of the profits go to children's charities.  Wild!

Thanks, Mario and Angelo for the chance to be wild!
Note - the winery calls itself Lunarossa Vini e Passioni - Wine and Passion.  Coincidence??? I think not!


Posted by Karen Phillips at 5:36 PM No comments:

A Pepper by Any Other Name...Azienda Agricola Vincenzo Egizio, Brusciano (Na)

I guess you could say the motto of my visit to Brusciano that Saturday was everything you wanted to know about papaccella Neapolitan peppers but were afraid to ask...
But  i really wasn't...afraid to ask, I mean.
So when I called up Vincenzo Egizio, Azienda Agricola Vincenzo Egizio, one afternoon I shared with him my sudden can't wait until summer desire to learn about that Neapolitan prized pepper - the papaccella.  Sure it would have been nice to walk through the fields, see them.  But it was late February. The last papaccelle peppers were harvested several months ago - just before the first frost. 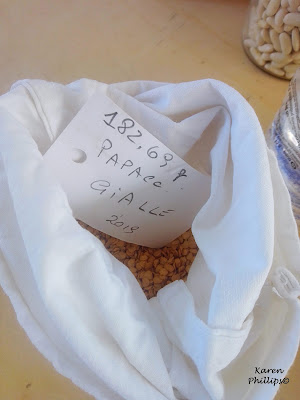 But my visit with Egizio, I believe, was timed just right,  considering that these Neapolitan peppers had recently (and finally) been recognized as part of the Slow Food Presidia brand.  These tiny peppers are NOT your typical bell peppers.  They are smaller, sweeter - perfect to conserve in a variety of ways.

I've been in this business for around 15 years, and over time we have organized a 'Vesuvian basket' where every product represents a producer.  These are mine.  Let's begin with the Neapolitan papacella.  Like wine, when we purchase a product, we need to know and understand where it comes from. We need to know the producers.  When we taste it, we can't tell if pesticides were used.  Looking at it, however, we can tell it it was grown in a green house or in an open field, if these was sun or bitter cold.  Even by its color we can tell if a large amount of fertilizer was used.  We can understand many things.  So that is why it is very important to know the producer.  How he/she works.  A perfect shiny papaccelle on the shelf may be appealing, but it may also be full of pesticides, etc.  The product must have flavor, but also needs to be good for you.  Even the terrain is important as well as the environment it grows in.  Alll of this contributes to the economic value of this product.  It is also imprtant where the product is grown.  Neapolitan papaccelle expresses itself best in Brusciano or the surrounding valleys such as Pomigliano.  I cannot grow the same product elsewhere  If I give these seeds to another producer, who may be better than I am, if the terrain is not the same, the plant will not be either.


So my next mission - to speak with Egizio about how he conserves the peppers.  Three ways; sweet and sour, marinated in vinegar, and grilled.
Each has its conservation process, each has its own type of dish to accompany it with.  Check out the video, and take a look at my paraphrased translation underneath.

The recipes are mine, prepared in the lab this way, with no conservatives or chemicals- just vinegar, salt, extra virgin olive oil and sugar.  Then pasteurized properly, obviously.  One type of conserving these peppers is the classic way- whole. 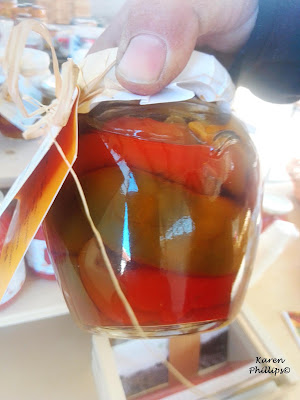 The peppers are washed, then place in a jar with water and vinegar.  They can be used in the classic Neapolitan reinforcement salad or served with pork or cod.

Another way to conserve them is the sweet and sour method.  Agrodolce.

Grilled peppers are a little quicker to prepare.  This particular jar has green peppers, which have more acidity. 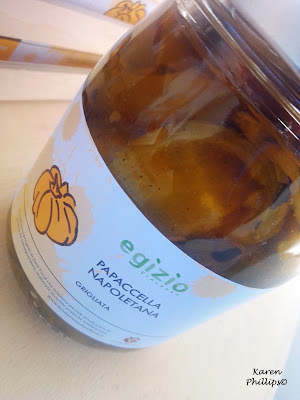 Many green peppers are on the market becauase they are the ones harvested last.  The harvest season is from August to November, and during November, producers notice that the frost is about to arrive so they harvest the remaining plants on the vine - many green.  The grilled pepper process is as follows:  the peppers are slice then boiled in water and vinegar aith a certain percentage of salt.  They are then drained, grilled, then placed in jars with parsley, garlic and extra virgin olive oil.  A perfect side dish.

So, it didn't matter that I didn't get a chance to walk the fields with Egizio in the height of the summer harvest season.  That will come later, for sure.  Because I first would like to hang out with him as he plants the seeds - very very soon. 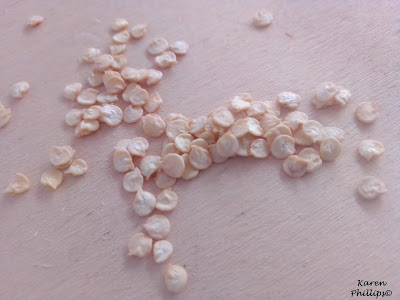 Posted by Karen Phillips at 6:14 PM No comments: