That Saturday hundreds of tourists arrived at Marina Piccola on the beautiful island of Capri around 11 a.m. I was one of them. And though many were headed to the beach, to take a tour, sight see or a go on a boat ride to the Blue Grotto I decided to head towards Punta Tragara Hotel. Punta Tragara is one of the top hotels on the island. It boast a 5 star Luxury hotel rating, a fantasticaaa view of the Faraglioni rocks, Monzu Restaurant, and Monzu Gin Club and American Bar.

Chef Luigi Lionetti met me on my arrival and showed me around .....


with one of the first stops being the bar and Daniela Chirico. 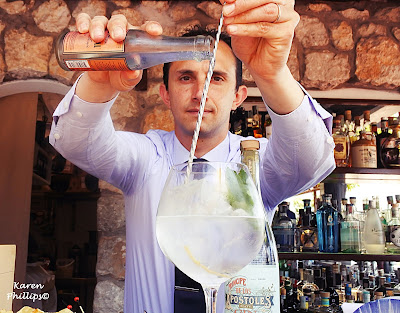 Chirico is one of the most talented bartenders on the island with a passion for gin and tonic. Monzu, then, was the perfect playground for my increasing curiosity about this historic cocktail dating back to the 19th century - aka a G and T. His cocktail menu has 150 types of gin and 21 different tonic water. 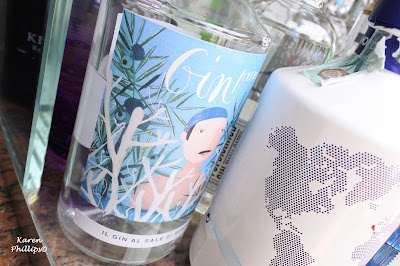 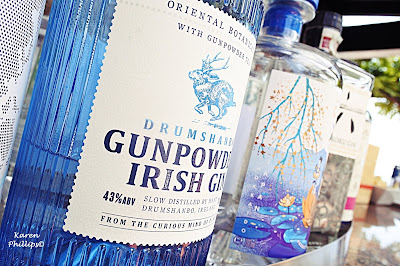 After studying the menu I asked Chirico for a little help.

He went into action. It was gin o'clock... 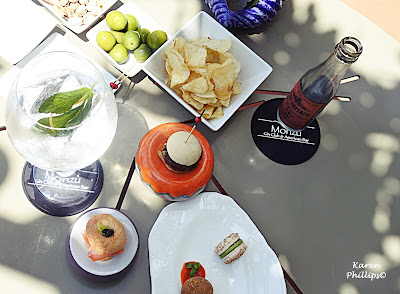 Posted by Karen Phillips at 6:41 PM No comments: 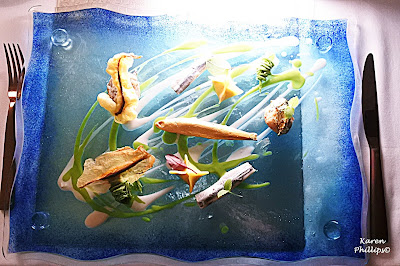 A few weeks ago I had the chance to chat with Michelin starred chef Pasquale Palamaro about his new menu for 2018.   The chef was 'in town' for an event not far from where I live.  He mentioned that he had been working on some new dishes that were...were...well, he suggested that I come to Ischia, to Ristorante Indaco to try for myself.

I was very curious, no wait...curiosissima, as they say in Italian.  So I decided to take a ferry  one evening  to Lacco Ameno to check it all out.


Palamaro loves the sea.  And why not?  Born and raised on the bellisssima island of Ischia one can certainly  understand why.  That is why last season he decided to devote his entire menu to the sea/il mare.  So it was no surprise that for his 2018 this theme would continue.  Let's take a look at two of his appetizers.

Golden Anchovies.  Fantasticaaa!  When the plate arrived, it was hard not to be reminded of an aquarium.  A sea colored platter which hosted Palamaro's variations of anchovies. 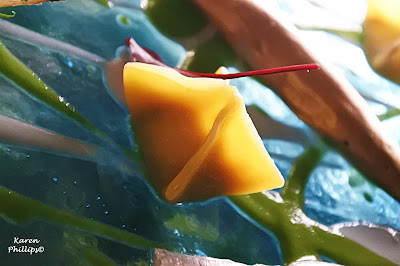 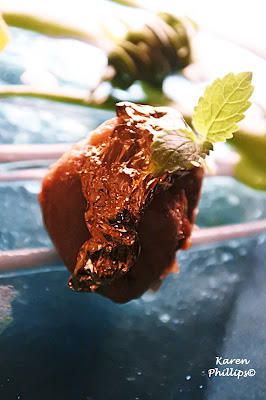 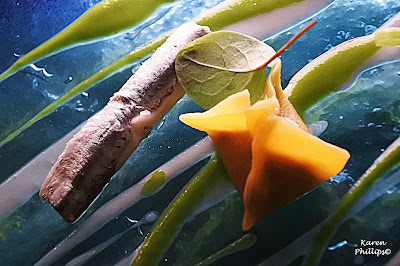 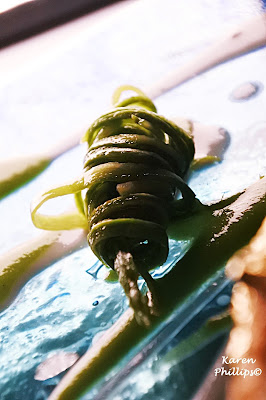 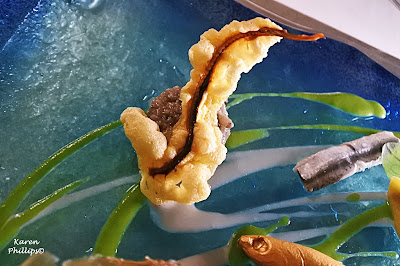 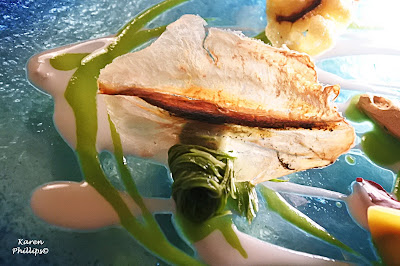 Palamaro's voyage under the sea continued with his grilled oysters and octopus carpaccio. 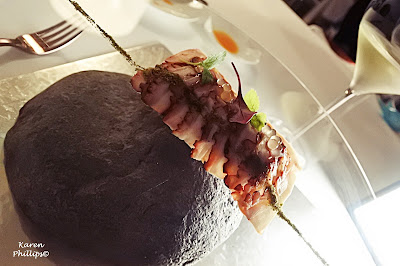 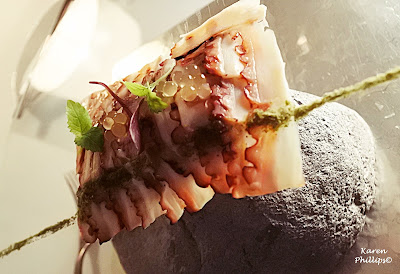 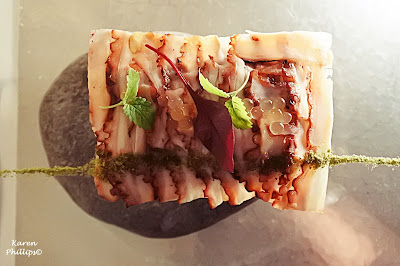 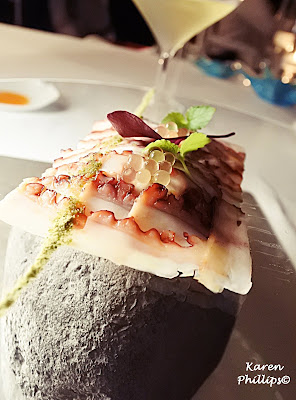 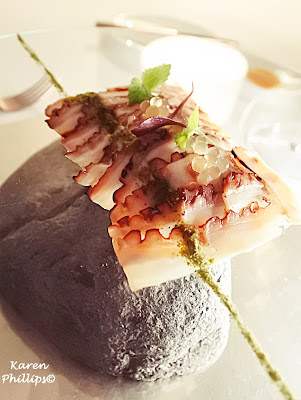 Posted by Karen Phillips at 4:37 PM No comments: 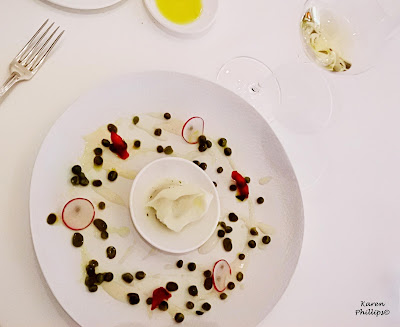 During my recent visit to Don Alfonso 1890, I was greeted with familiar smiles and these dishes featured in their Spring 2018 menu. Appetizers with 2 Michelin stars!!

Marinated red snapper cannoli in buffalo milk yogurt, lemon and chili peppers, like a ceviche, with white sesame sauce and spring vegetables. ( I told Chef Iaccarino that this was one of my dishes of the day)


And this creamy garlic soup with crab. Garlic lovers unite!!!!! (This dish reminded me of their classic tomato and crab soup from 2014) 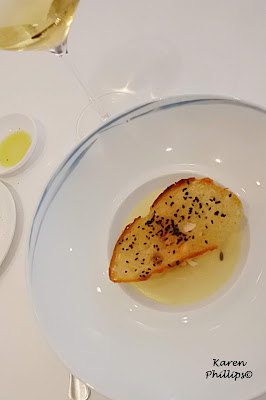 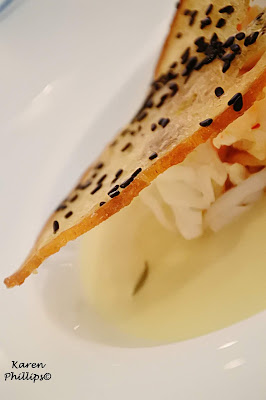 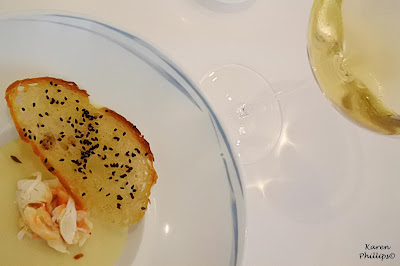 Posted by Karen Phillips at 12:55 PM No comments: 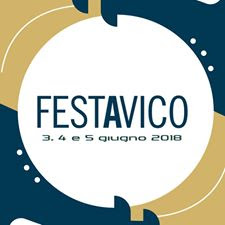 In just a few hours, the sixteenth edition of Festa a Vico will kick off with Repubblica del Cibo. Vioc Equense,on the  Sorrento coast is preparing to welcome over 180 chefs for the most popular event of the event organized by Gennaro Esposito, two-Michelin-star chef of Torre del Saracino in Seiano. Here's the deal, a 20 Euro donation to one of the six Onlus friends of the Festival (Santobono, Alts, Fondazione Pro, Noi con voi per le Mici, Istituto Costiero, Chiesa della Santissima Annunziata) you can buy tickets that will give the opportunity to taste five dishes (plus water and coffee) or four dishes and enjoy a glass of wine (plus water and coffee). Last year there were about 15,000 people who attended so it is highly advised to arrive early!  The stands open up at 1930! 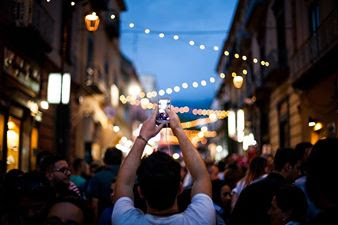 Posted by Karen Phillips at 8:15 AM No comments: