Fantastic Four Cooking - A Night for Superheroes Only 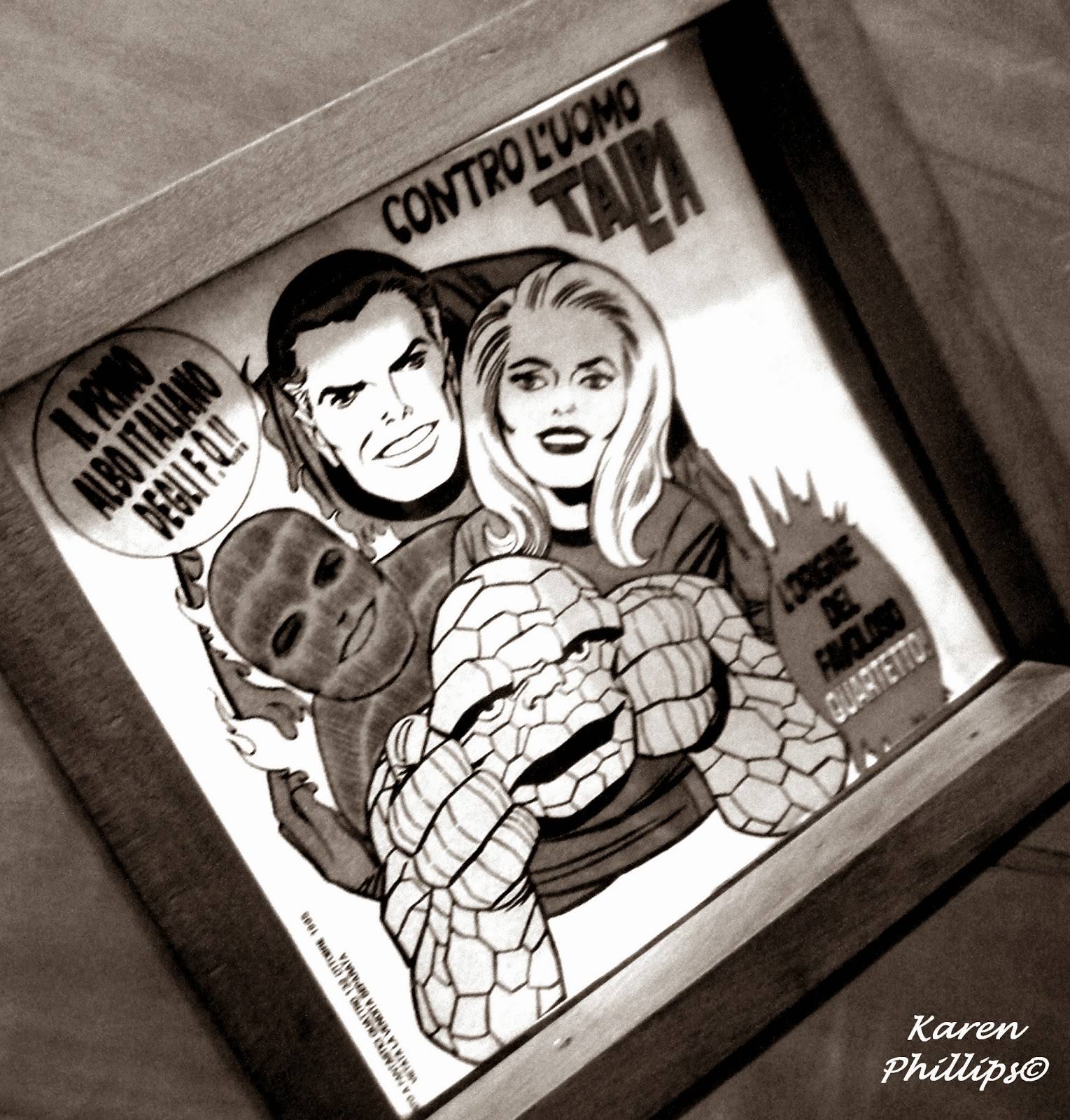 I can bet that there aren't many of us that didn't have their noses in comic books as a kid.  I remember being particularly fond of the superhereos.. We all had our favorites; X-Men, Spiderman, Superman, Batman...and The Fantastic Four.  Who didn't want to be one of them?  A super squadra, a team, each with their own super powers and super abilities.

That may be why myself a curious Neapolitan crowd flocked to Posillipo's Villa Caracciolo to check out a super idea shared by journalists Laura Gambacorta and Michele Armano.  A dinner with four chefs...excuse me, four fantastic chefs.  The super part?  The guests did not know who the chefs were-just the dishes they would prepare.  During the weeks leading to the event, the social networks were buzzing with guests  who were determined to guess the identities of Mr Fantastic, the Human Torch, The Thing, or The Invisible Woman. When I arrived, the chefs were in hiding.  The only one we knew before the event was our host - Chef Fabio Ometo who put out a grande buffet of small bite size appetizers to tie us over and build the tension as we chatted about who may be who.  So with a glass of spumante in hand, Asprinio spumante brut – Quartum Cantine Di Criscio 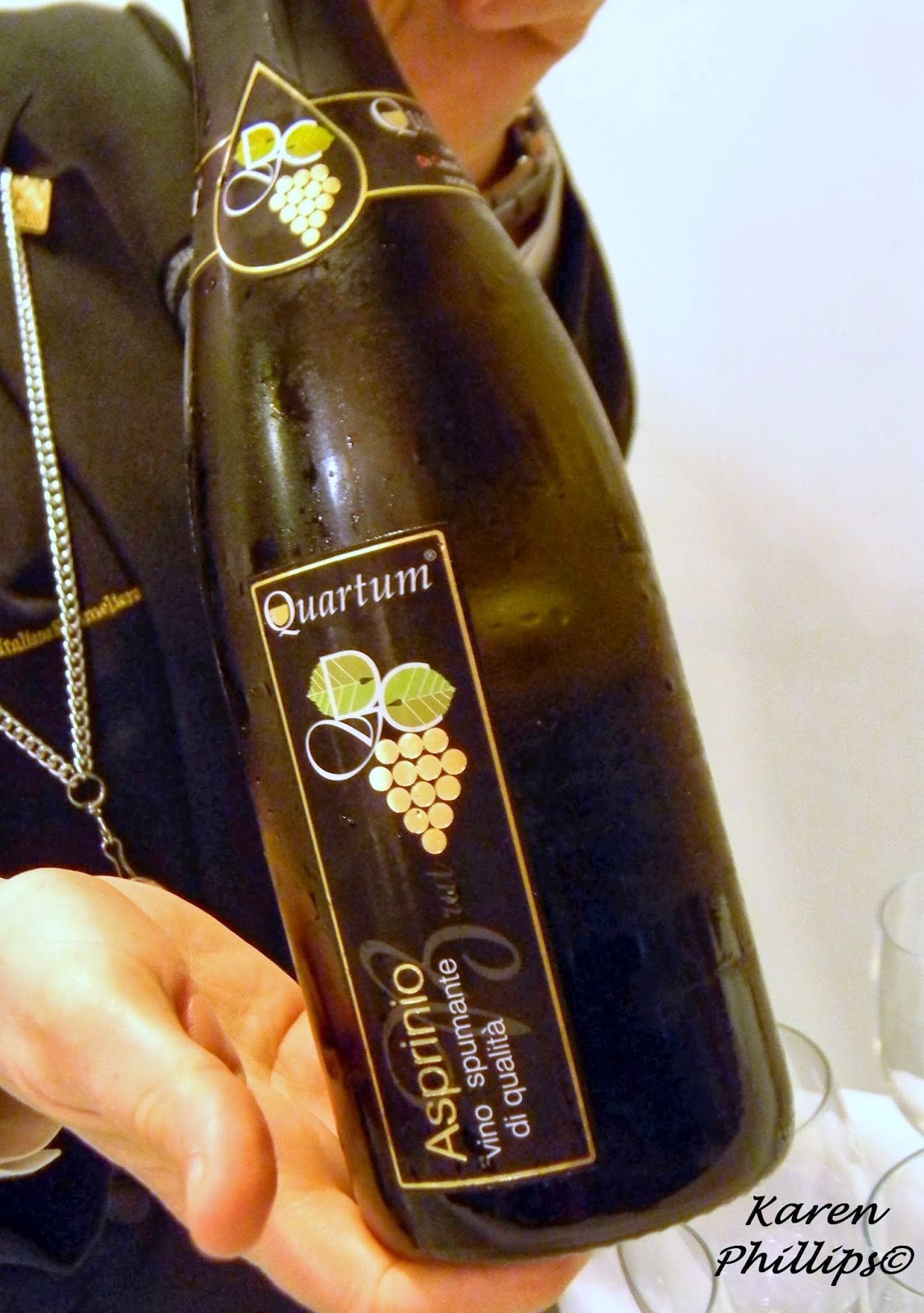 it was time to taste series of, excuse the pun, fantastic dishes such as...

Stomachs satisfied ish, it was time to get down to business.  Time to try each dish, paired with wines from 'the territory' and do our best to see who was the fantastic personality behind each dish...

Appetizer:  Mr Fantastic who Wikipedia defines as  a scientific genius and the leader of the group, who can stretch his body into incredible lengths and shapes.  That night Mr Fantastic was played by  Chef Michele Grande of La Bifora in Bacoli (Na): Octopus and shrimp in sea water, creamy potatoes with rosemary, black and squid ink chips, with orange aromas and Maldon salt.... 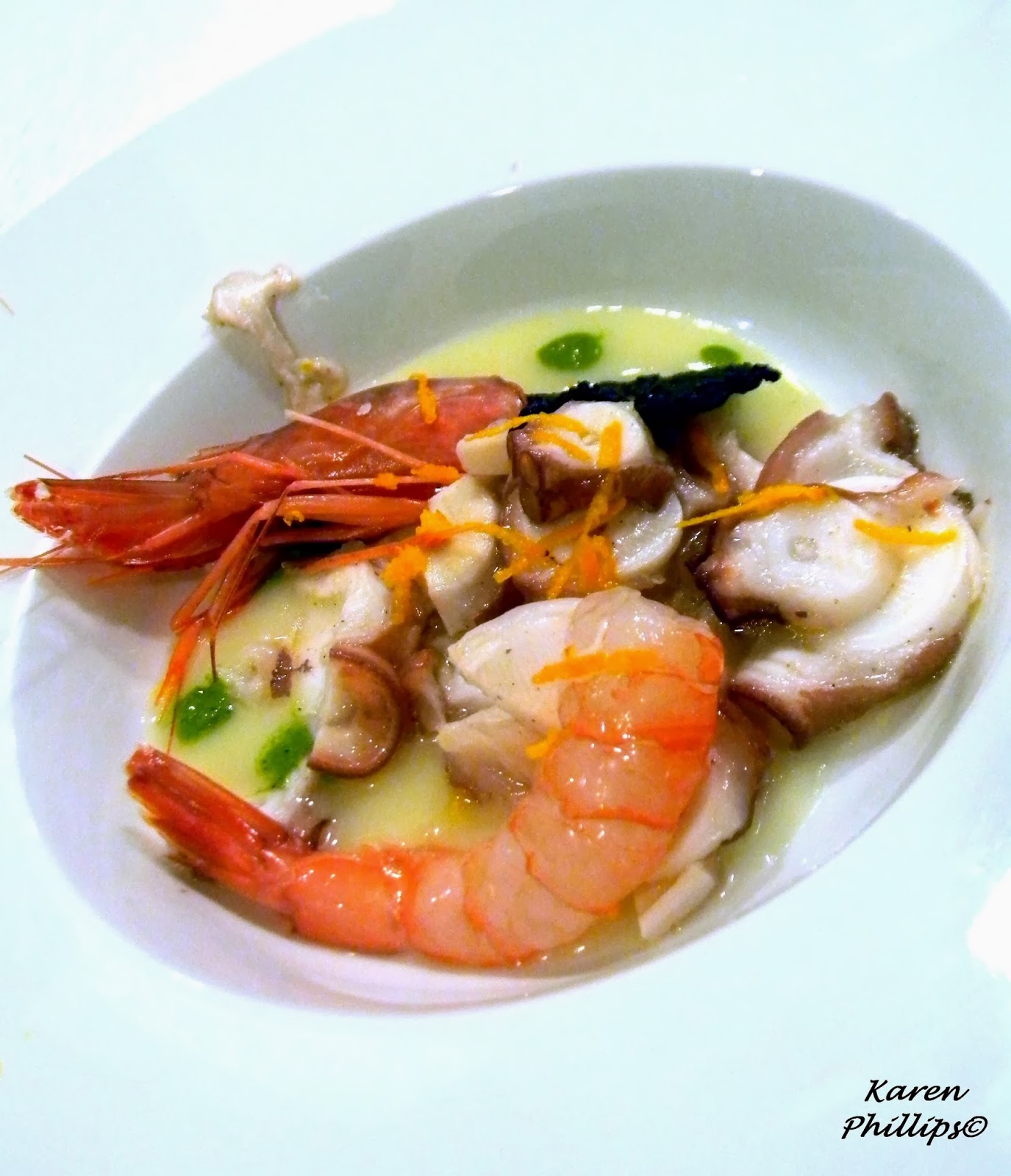 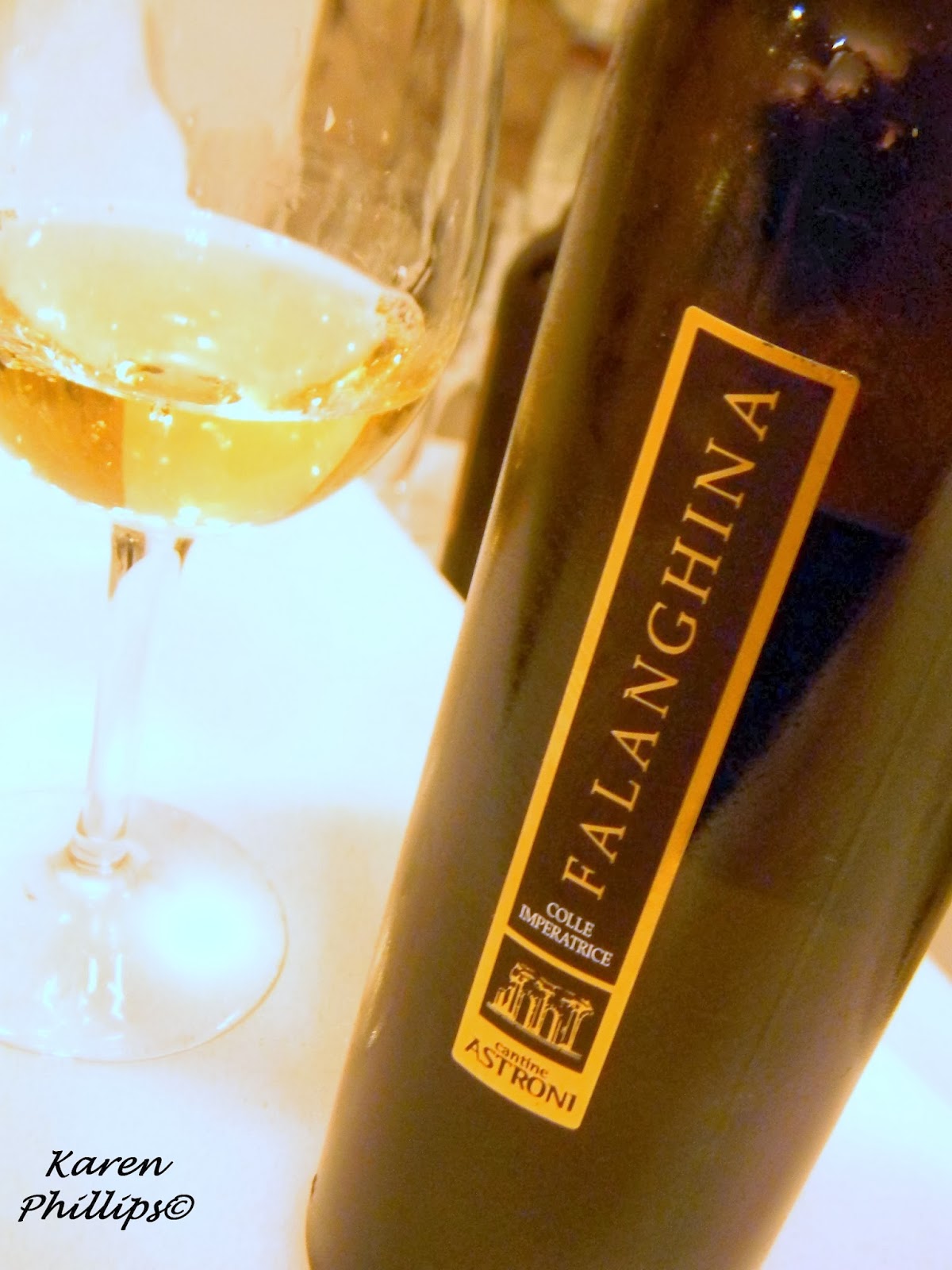 Next up was the Human Torch - who can generate flames, surround himself with them and fly...Our Human Torch was Chef Maurizio De Riggi of Markus in  San Paolo Bel Sito.  His dish was 'burnt pasta' stuffed with buffalo milk ricotta, coffee,  spicy jelly a burnt crispy egg wafer , and a  Montoro onion sauce cooked under ashes. 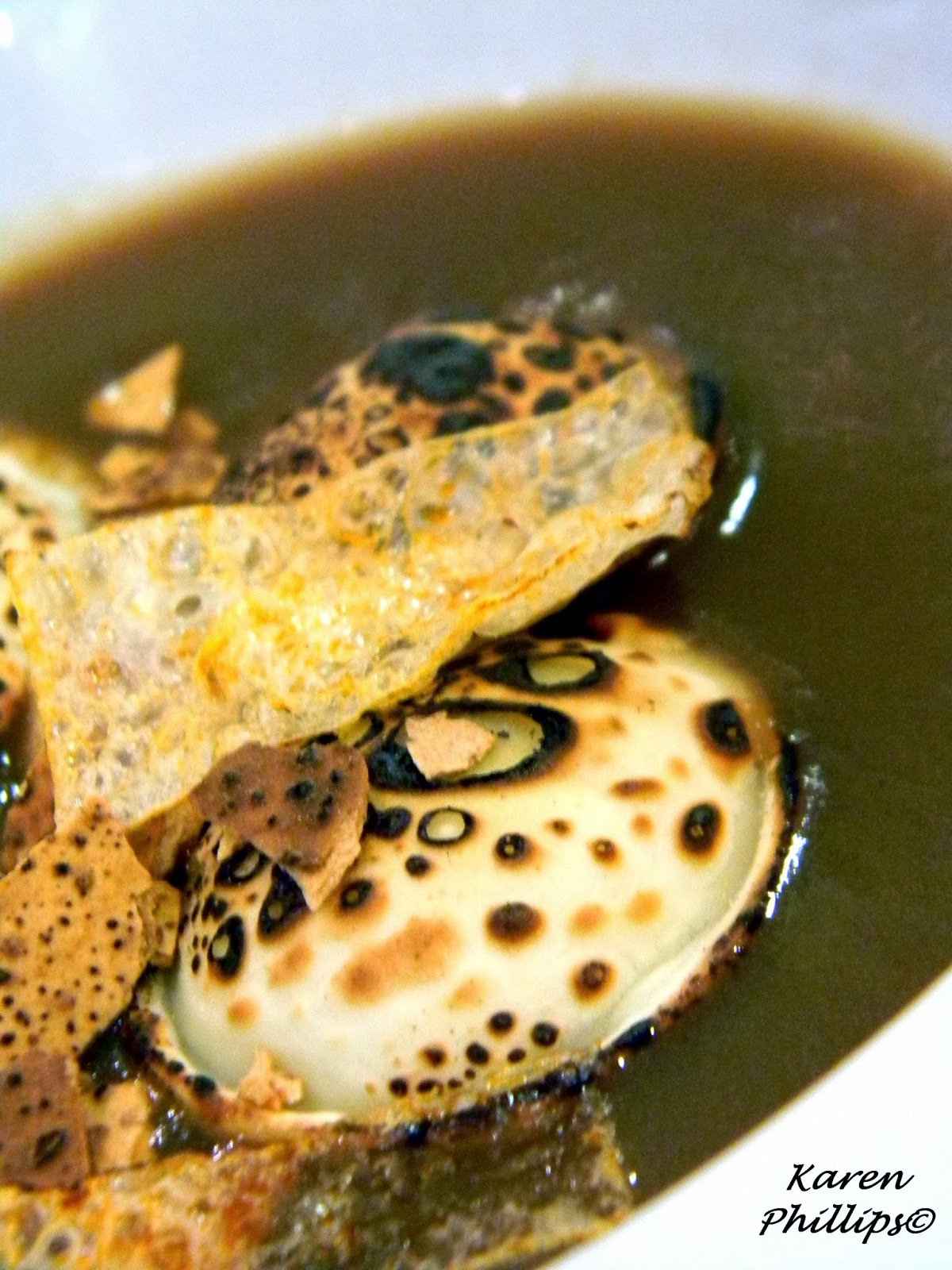 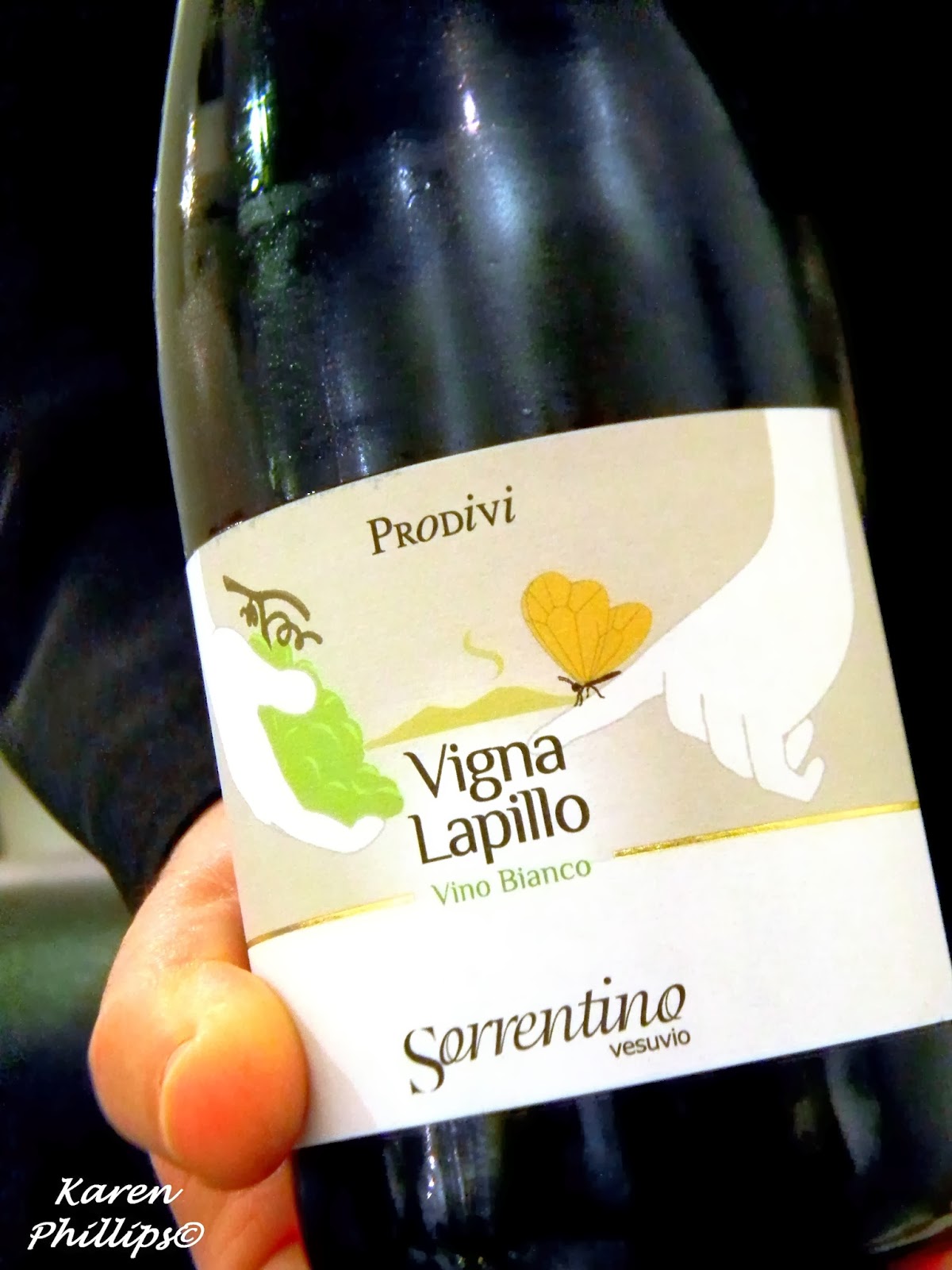 Next up, The Thing - their grumpy but benevolent friend, a former college football star and Mr. Fantastic's college roommate as well as a good pilot, who possesses superhuman strength and endurance due to the nature of his stone-like flesh.  This evening, Chef Guiseppe Di Martino of La Torre del Saracino in Seiano (Na).  The Thing presented what may have been the plate of the night; Stewed rabbit with caramelized onion from Nocerino, corn biscuits and black olives. 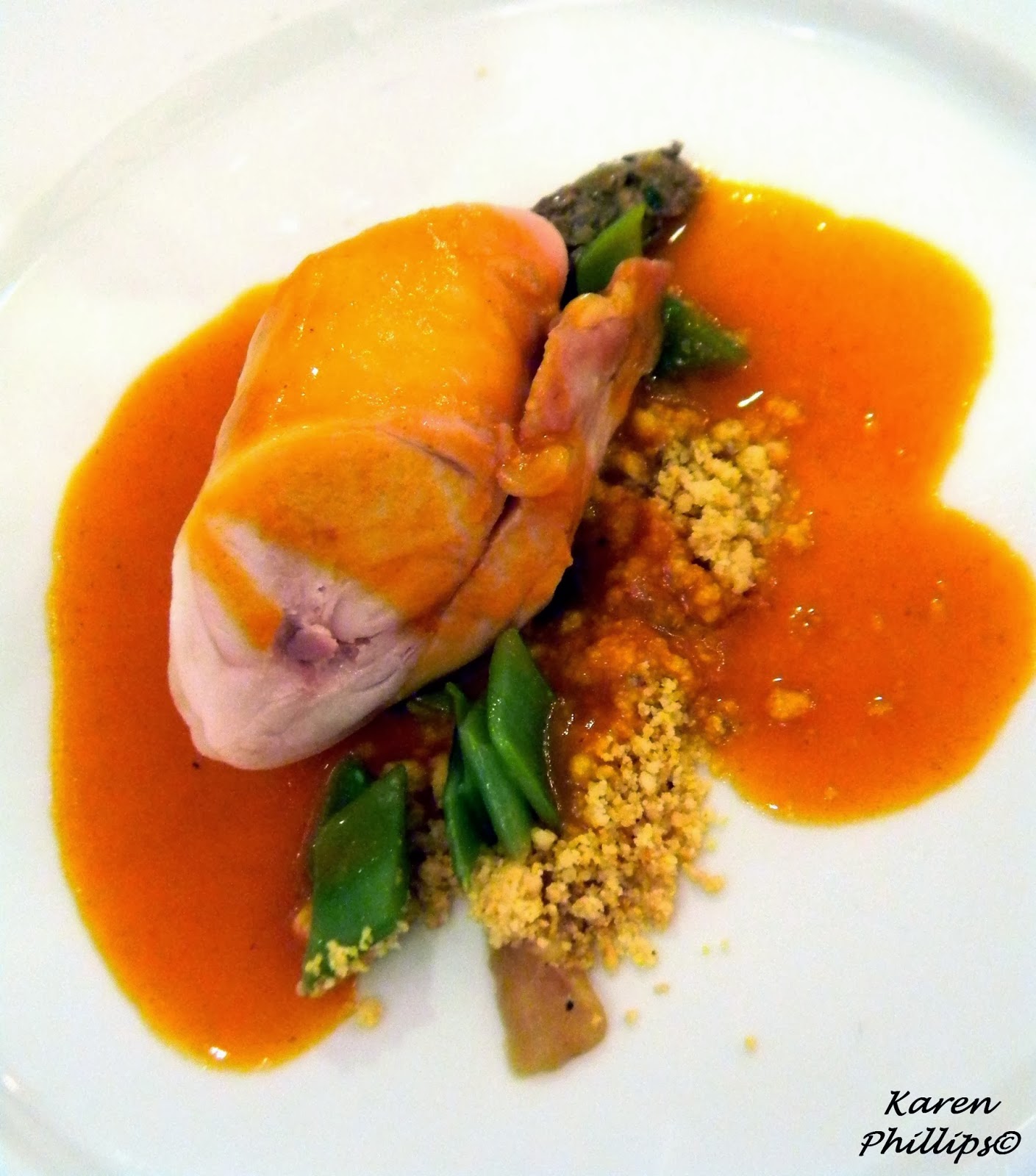 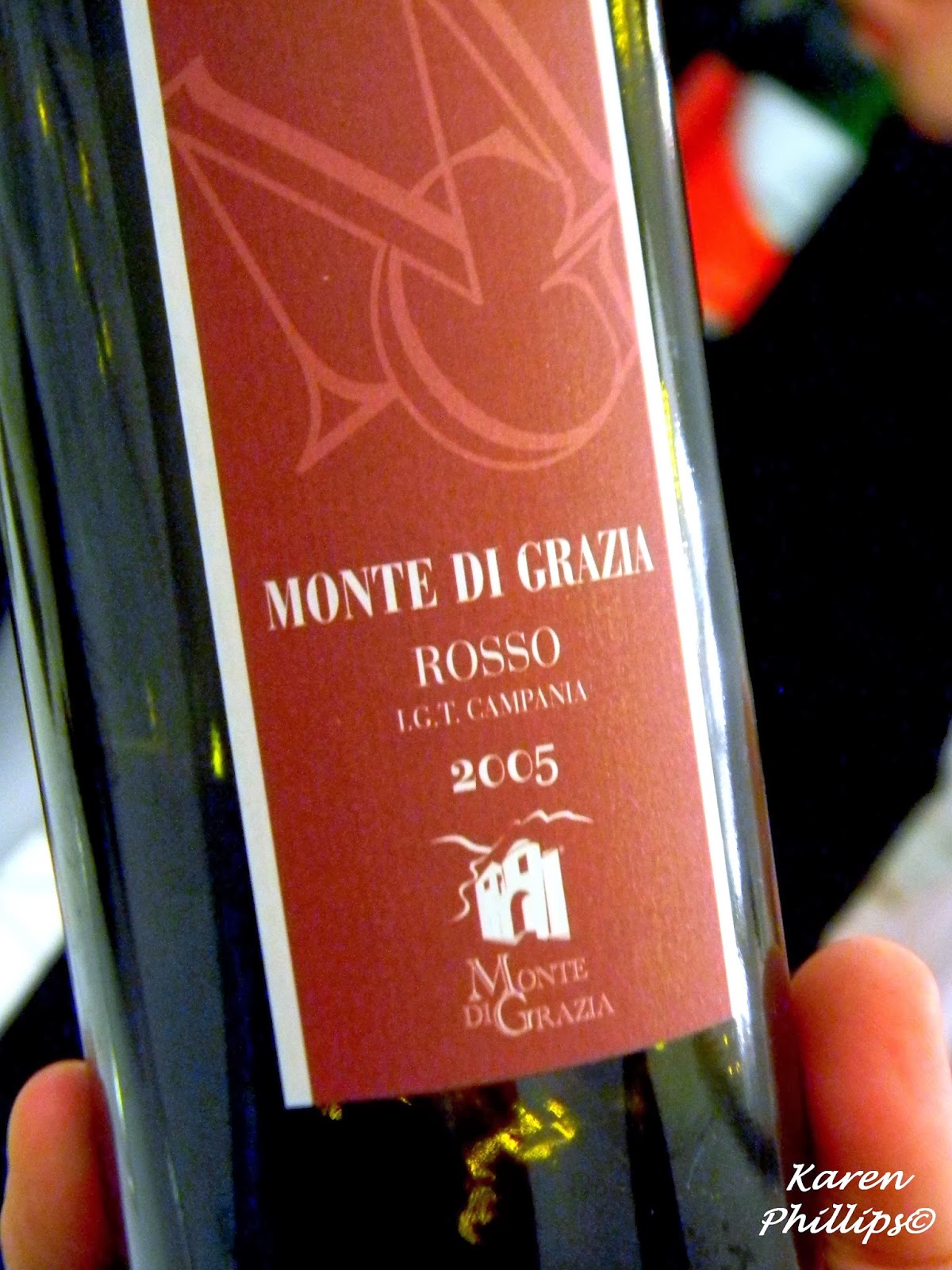 Dessert left us with one more surprise. It was time for The Invisible Woman, who can render herself invisible and later project powerful force fields, to show herself.  Chef Faby Scarica of Terrazza Bosquet in Sorrento(Na).  Her dish:  air of the sea; creamy basil and salicornia with notes of musk, vaniglia flavored lemon and  olive oil. 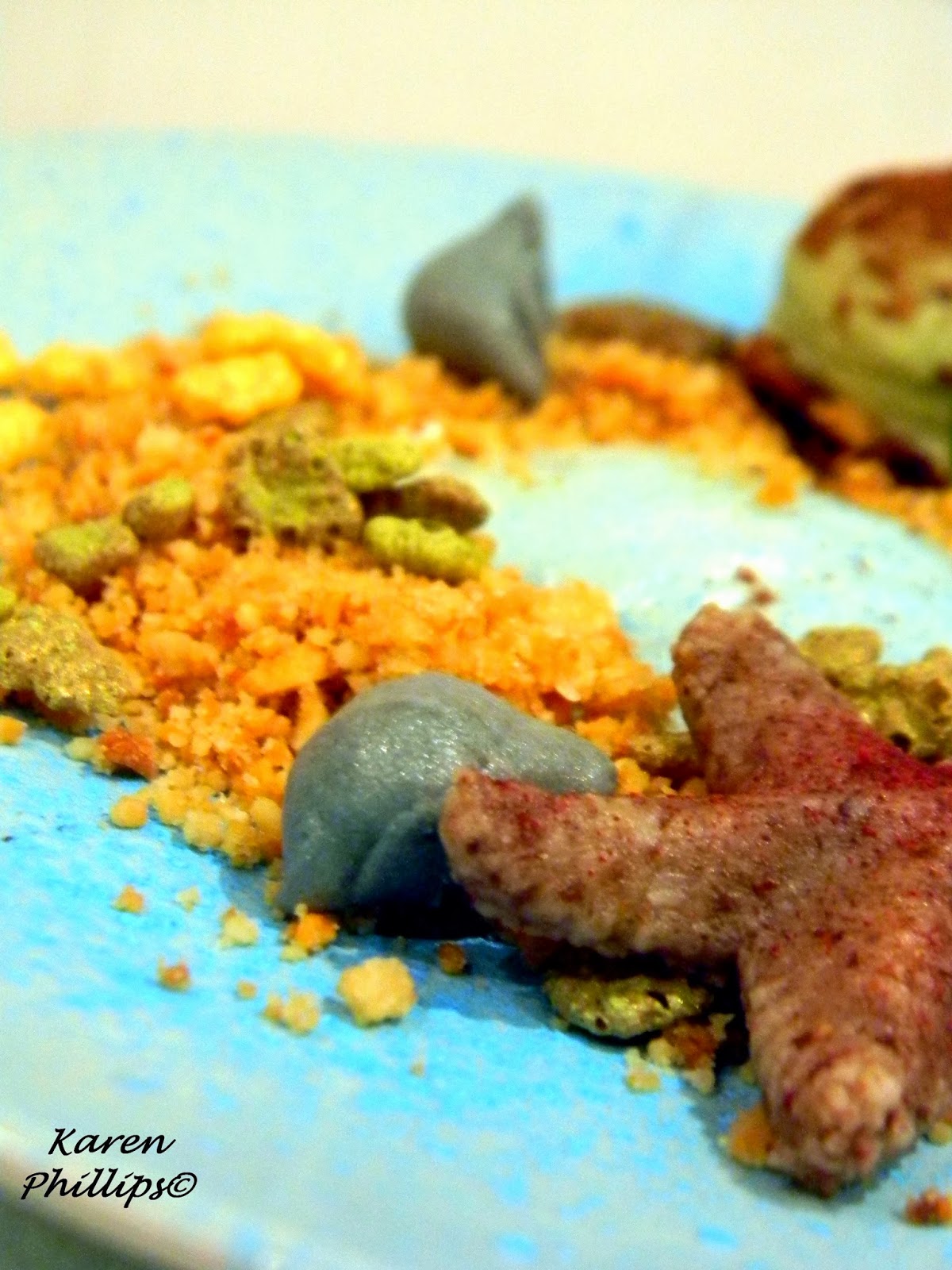 This was paired with Elixir Falernum from Antica Distilleria Petrone. 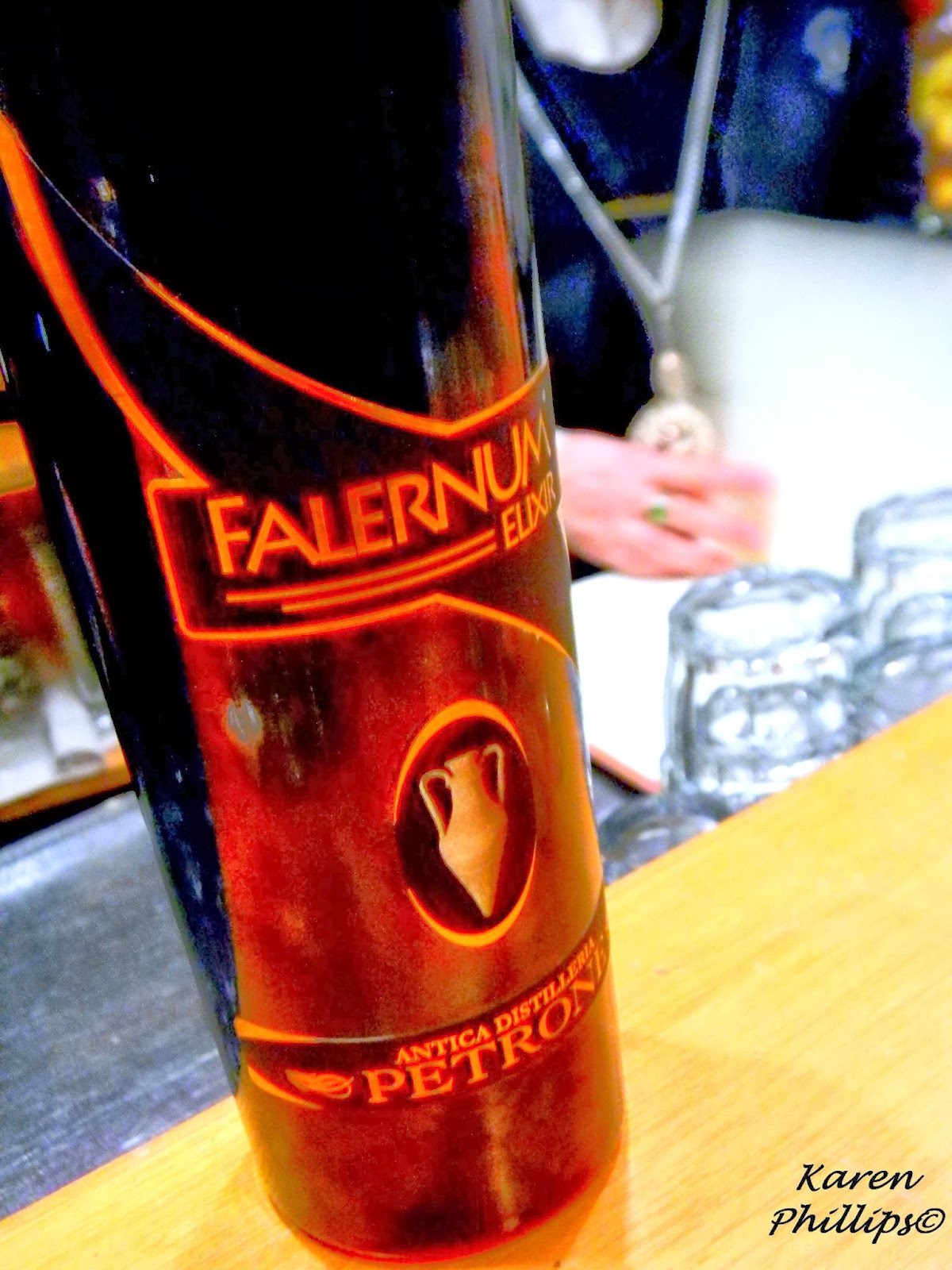 A fantastic evening?  I think so.  A fantastic idea that kept the crowd intrigued throughout the entire evening.  A fantastic opportunity to get to know four young Campania chefs based on their dishes only. And a fantastic chance for us all to feel a little superhero ish...
even if only for one night.

Posted by Karen Phillips at 9:28 PM No comments:

A Friday night wine tasting event turned from the usual to world class when Michelin star Chef Rosanna Marziale of  Ristorante Le Colonne visited Azienda Vinicola Di Criscio's Quartum Store.  Well, she didn't just visit.  She brought several of he famous dishes from Caserta and paired them with the wines of the winery based in Quarto.

The evening began as every evening should...with a light fresh spumante.  We had a glass or two of Asprinio Spumante brut metedo chamat to go with our first two courses. 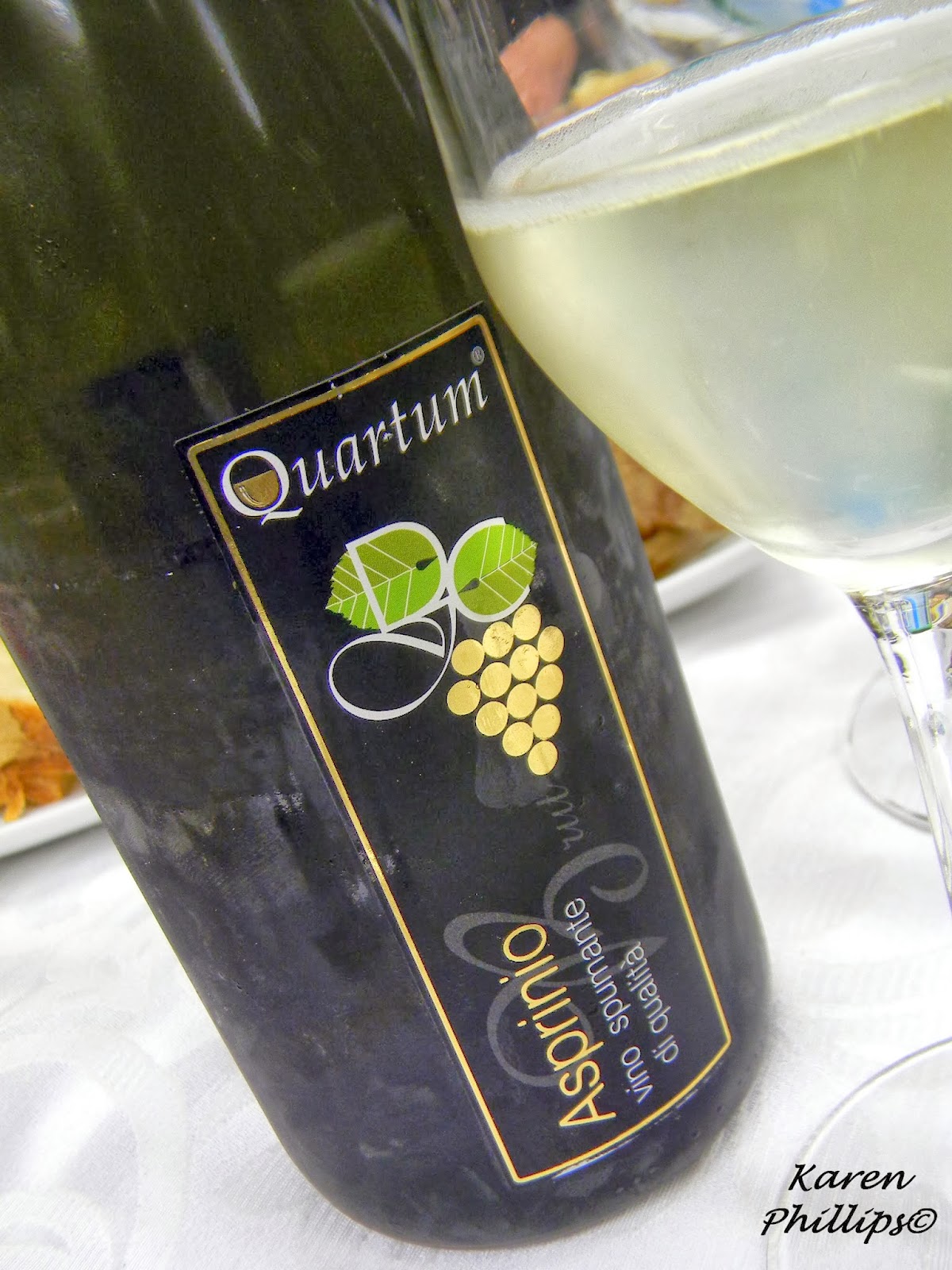 Then it was time for our appetizer:

Followed by our pasta course:
Our main course called for a new wine.  Campania Aglianico IGT 2010 aged in barrique which the chef used to prepare her stew. 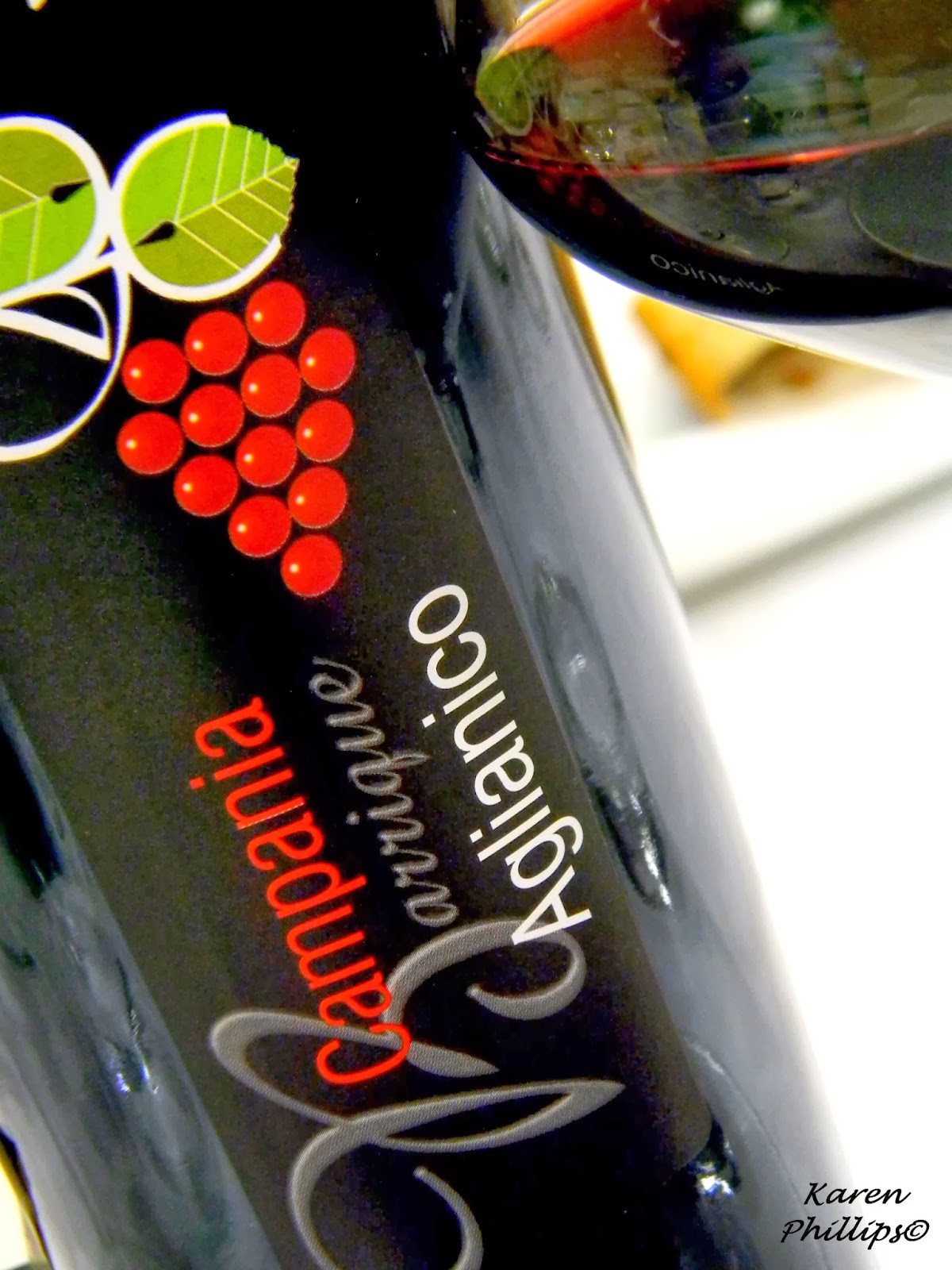 Friday night in cantina will never be the same.


Posted by Karen Phillips at 1:13 PM No comments: