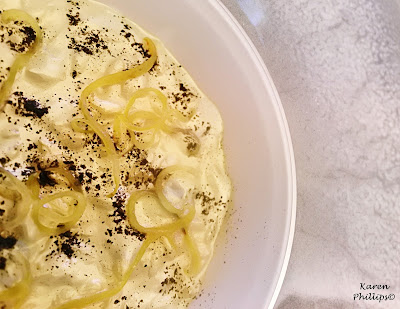 Saturday in Rome.  Rome?  What's a Campania blogger doing in Rome,  Enoteca La Torre to be exact?  The answer is obvios - at least for many readers of my blog.  The Michelin starred restaurant has been undr the helm of young Campanian Chef Domenico Stile.

One of the dishes that stood out for me that afternoon was this risotto.  I'm a pasta gal, but when rice is done right,  I just have to speak about it. 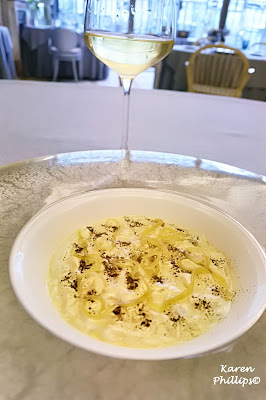 This dish has it all! Amalfi lemons, smoked lemon powder, yogurt truffles with plankton and candied lemon zest. 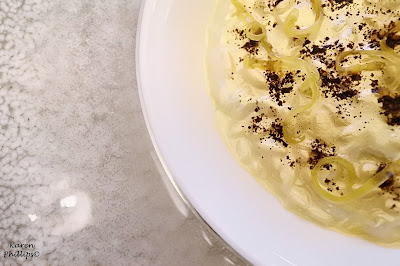 Dip in your spoon and what do you find? Sea truffles, asparagus - all covered with gold (edible of course). 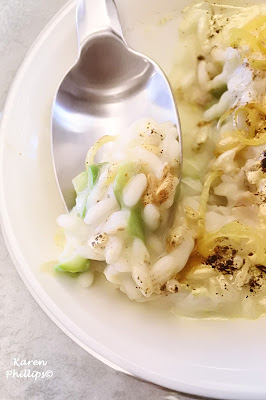 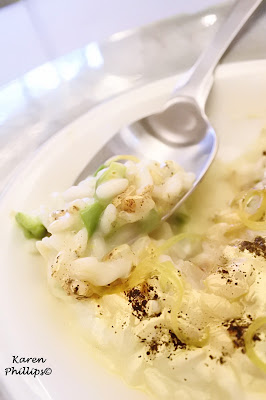 Fantastic!
Posted by Karen Phillips at 7:46 PM No comments: 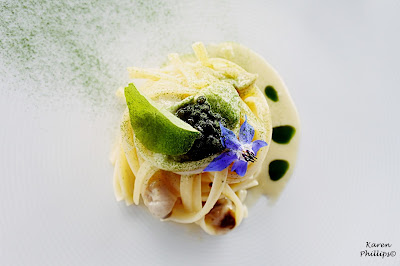 Pre service chit chat with Michelin starred Chef Pierfranco Ferrara of Il Faro di Capo D'Orso.  A splendido location on the Amalfi Coast.  It was my first visit, so you could just imagine my stato di anima/my mood.  Very shy and a bitnervous.  The chef and I talked about the menu, his menu.  I mentioned my love for pasta lunga - and also that I noticed that on the menu there was one in particular that gabbed my attention. But with an exception - I'm not a big fan of fava beans.
Maybe that is why I was pleasantly surprised when Ferrara sent out this dish, custom made for me! 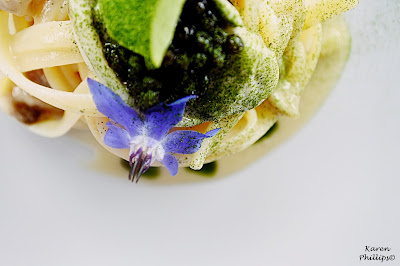 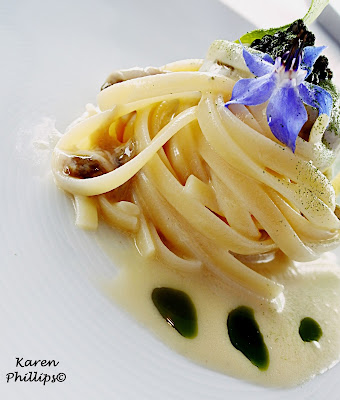 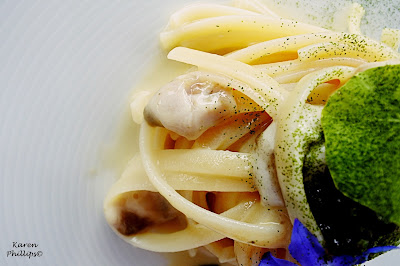 Posted by Karen Phillips at 9:09 PM No comments: 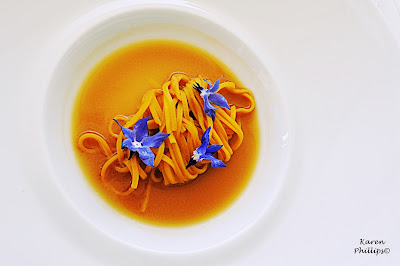 Pasta is a girl's best friend.  Especially this girl. I've mentioned more than once about  my love for pasta lunga, Like this dish prepared for me by young Chef Fabrizio Mellino of Quattro Passi.  The restaurant is in Nerano, a small town that hugs the Sorrento Peninsula's coast line.  Mellino, howeer, decided to add flavours from his experiences in Japan to this dish. 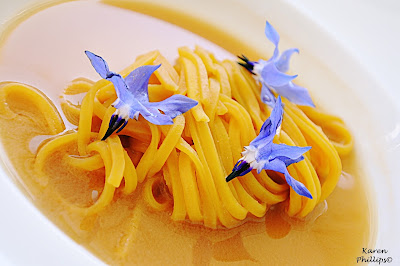 The past sauce is made from three types of miso from three different regions in Japan together with a shrimp and scampi bisque.  The homemade tagliolini egg pasta is cooked delicately then placed in the sauce and topped with borage flowers. 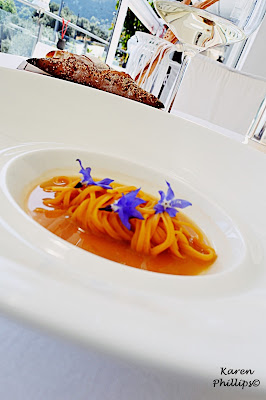 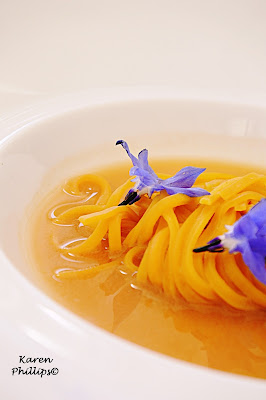 Posted by Karen Phillips at 11:59 PM No comments: 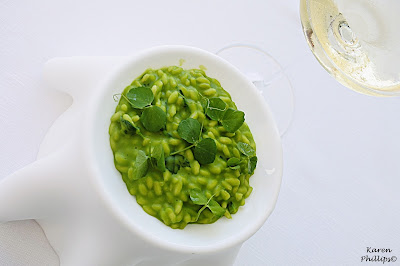 Spring-
An excellent opportunity to go for a drive.  The Campania region, after a winter particolare, decided to get back to normal with a weekend of sunshine and nearly summer temperatures.  Great for me, since I had decided to head back to Quattro Passi, Nerano's 2 Michelin starred restaurant.  Nearly a year had passed since my last visit and I was very curious to check out what Chef Antonio Mellino had planned for the 2018 season. Chef Antonio was out of town, but no problem!  I was in the capable hands of his son, Chef Fabrizio Mellino,  young in terms of age, but very mature and confident in the kitchen.  Mellino served several first course dishes, but this one  hit me hard.
Risotto with peas and pea sprouts.  Sounds simple, but the flavors were, well, fantastic! 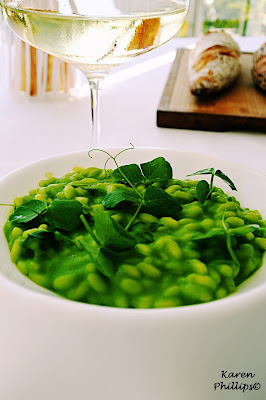 I spoke with Mellino and here's what he had to say... 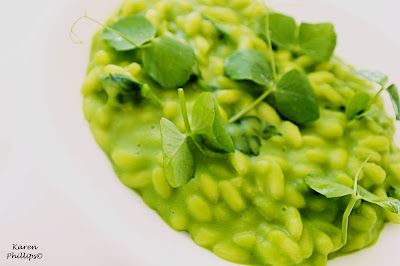 Rice and pea sprouts,. We dry roasted the rice, then we cooked the rice entirely in the  water used to cook the peas.,Towards the end, we added the pea sprouts -to give it a little 'more' territorial'  and a little less fruity flavor. We enjoyed  playing with the vegetable flavors. 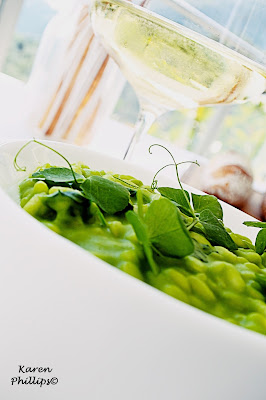 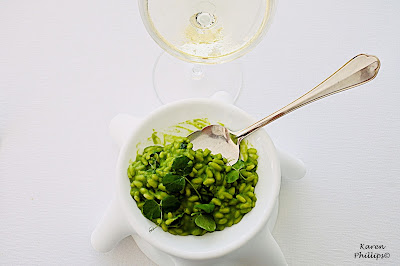 I asked myself  Why?  Why did this particular dish hit me so hard?
The first spoonful gave me a kick of pea sweetness that can only be found during the spring season. So I thought back.  To my memories of sweet peas.  Those that we usually frozen, or in a glass jar/tin can stored in pea juice (?).  Vegetables that could be found all year long.  Meaning that there was nothing special about them.  Zero anticipation, and often zero flavor.  Here, Quattro Passi's simple risotto dish embraced the spring season.  Embraced a simple sweet pea at the height of the spring season and helped it to express the fabulous flavors of spring...
of la primavera...
of Quattro Passi...

Posted by Karen Phillips at 3:48 PM No comments: