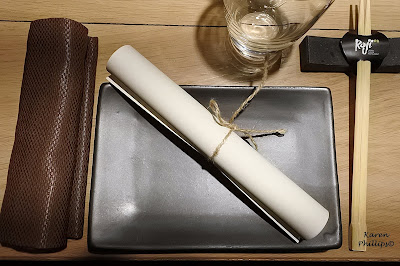 During the week it seems like the opportunities for a night out are endless -an event here, a tasting there- how does one decide? Over the years, I've had to cut back a bit due to the late nights and/or the fact that I need to get up early the next morning to go to work. A couple of weeks ago, however, there was an event that caught my eye. An event that made me bend the rules a bit so to speak. An event entitled 6 Hands Fusion. The location Roji Japan Fusion Restaurant. A restaurant, which over the past couple years, has been one of my favorites for sushi and fusion. Sushi Chef Alex Pochynok is one of my favorites in the area. For this particular evening, he teamed up with Chef Salvio Vivenzio and Chef Giuseppe Molaro.


Molaro, known for having received a Michelin star during his run at Heinz Beck’s restaurant in Tokyo, Japan. Molaro is  from the Vesuvius  and is back home in his Campania with plans to  open up a restaurant in the near future. This time I would have a chance to see how this chef would  mingle/fuse and blend  with the two chefs from Roji. I took my seat at the sushi bar and had a front row opportunity to observe how the three chefs mingled and work together. The evening was casual, elegant and refreshingly smooth... When most of the diners were seated, Maitre  Domenico De Rosa served me the first of the aperitifs of the evening - a French oyster served with its own oyster card Speciale –David Hervé. Served with Saten, Ca del Bosco. 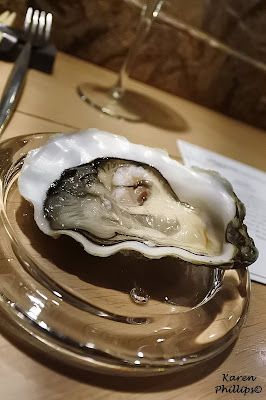 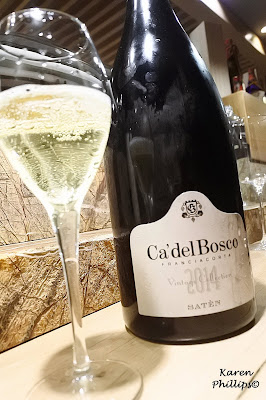 A perfect choice for the evening, one of the wineries chosen, pairing beautifully with the dishes to come. Dishes such as a tsukune chicken with teriyaki sauce, codfish bon bon, fried/raw shrimp and a special carotonic. 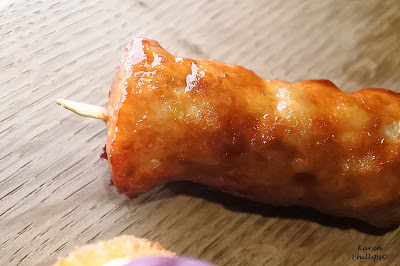 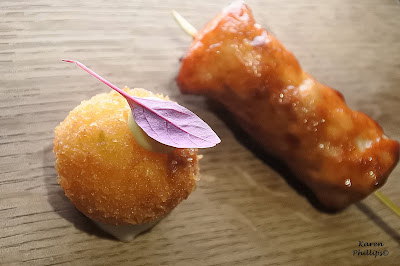 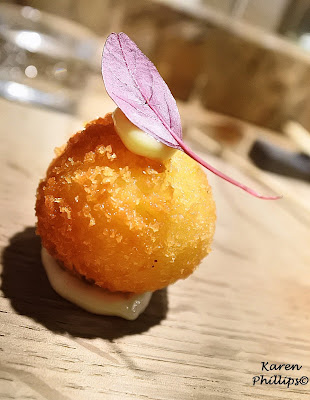 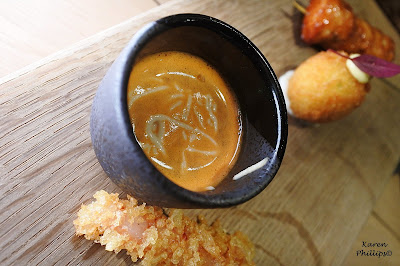 It was then time to get started- time for the chefs in the kitchen to heat it up... Pochynok’s appetizer of lobster and raspberry carpaccio with caviar. 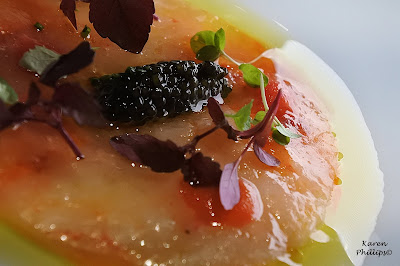 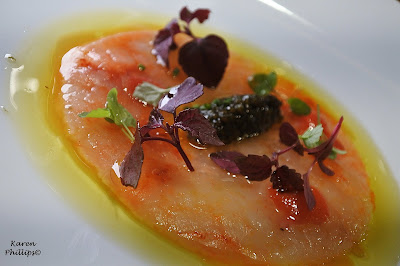 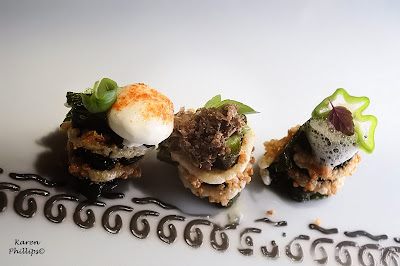 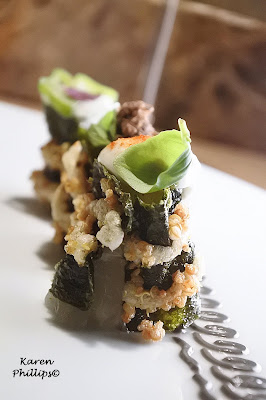 Next from the kitchen sushi -foie gras, duck and anchovies from Lampara. 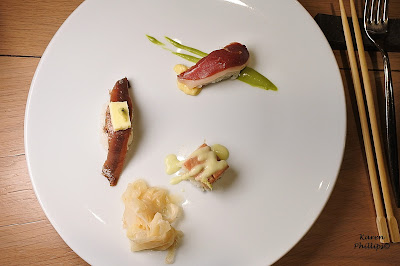 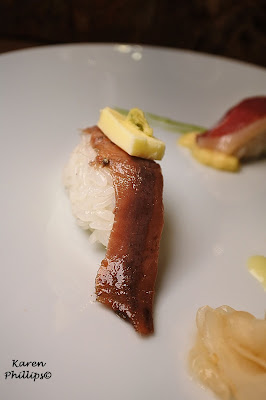 At this point, I took a break in the action to head into the kitchen to look at chef Molaro as he prepared his risotto with shiitake fungi. One of the beautiful things about this simple looking result was not only watching the chef as he prepared this rice dish and then enjoying the layers of flavors that included Madeira wine and honey aged in French oak barrels. 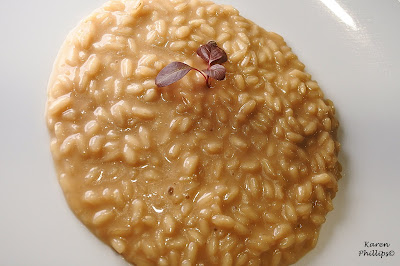 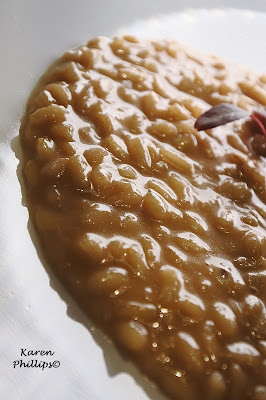 Another dish by Molaro was Waraiaki tuna with yuzukoshu and daikon on dashi gelatin with rice vinegar. 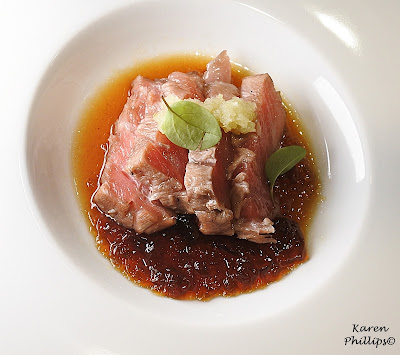 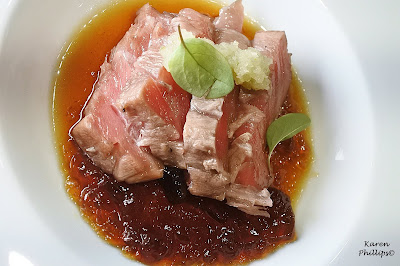 Then Iberian suckling pig with onions and apple. 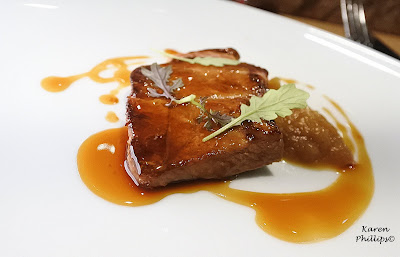 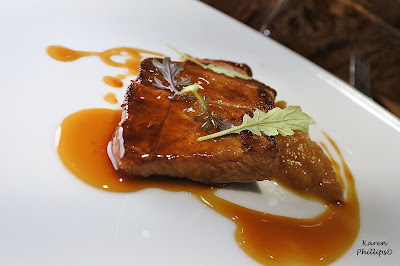 Time for the pre dessert - bread butter and jelly. 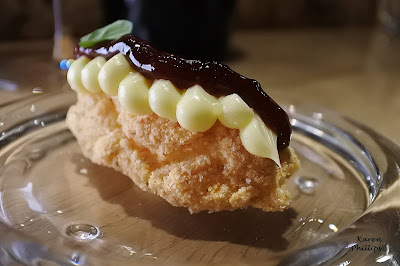 It was getting late, but I couldn’t leave without dessert- 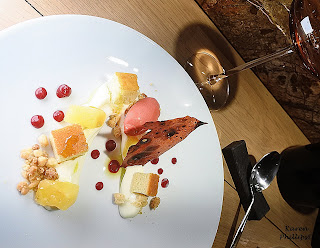 Other wines for the evening included Ca Del Bosco Anamaria Clemente, Maurizio Zanlla and Gosset Rose' Champagne.In other words - A grande night out!
Posted by Karen Phillips at 7:27 PM No comments: