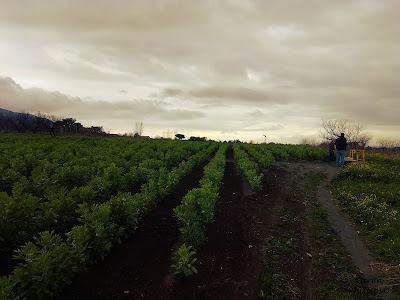 Allora, Karen...I'll send you the GPS coordinates.  Let's hope that it doesn't rain....

And that's how my day in the country Campania began with Giuseppe Rea and Francesco Manzo of Officina Vesuviana began.  Well, sort of.   I had been hoping to have a visit - in the country - in the shadow of Mt Vesuvius for quite some time.  Years maybe.  I don'y know how many times in my 25 + years of living in the Campania region have I seen these pieninelo tomatoes hanging by the roadside during the summer months.
But it wasn't until recently that I decided to take a bite, so to speak, of these pomodori - those special ones - that can only be found  in the Vesuvius area.  Those ones label PDO. Those that only grow in this particular territory. This pear shaped tomato with a pointy end.  Full of strong acidic flavors thanks to where the soil that they call home. 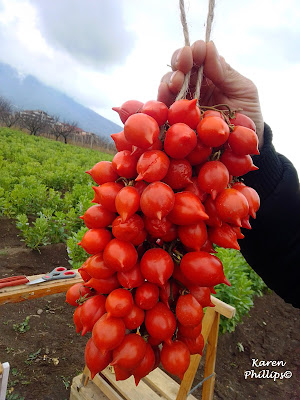 Yeah, I could have done a little research on the internet, but I wanted something di piu'.  I wanted to see these tomatoes up close and personal.  To talk about them with those who know what they know what they know.
So let's go back to my message from Giuseppe (aka Peppe) Rea. My appointment with the guys from Officina Vesuviana was for 1:30 pm ish on a cloudy Saturday morning.    I pulled up around 1345 - Rea met me with  a smile and a 3 wheeler piaggio which I followed as he opened up a gate that led me to a goose bumpy world of complex simplicity.
Dark grey fertile volcanic soil - exhilarating aromas of fava beans in the air.  Fantasticaaa!
But I came for tomatoes - even though it wasn't tomato season.  You see, that is the beauty of these piennolo tomatoes from Vesuvius.  Though harvested in the summer, they are conserved in a special way - on braided twine - they can be consumed well into the spring.
So I was treated to a spectacular show - simple for Rea and Manzo, but memorizing for those of us who had never seen it up close and personal. 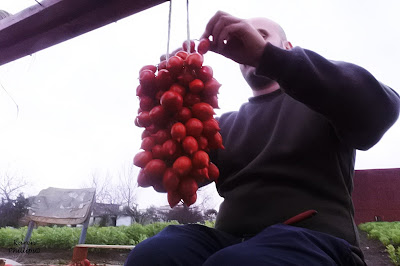 Rea sat and went to work, Manzo explained the process.
And who imagined that as the months went by that the tomatoes' aromas and taste would change/mature - just like a fine wine. 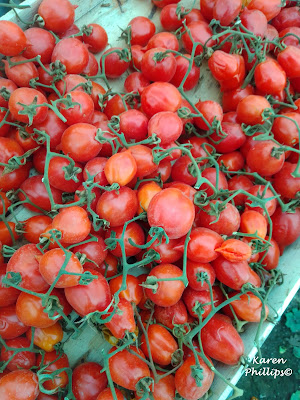 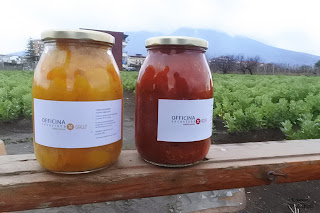 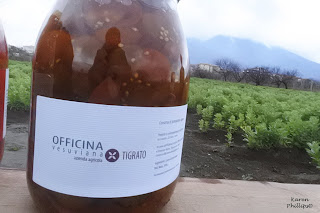 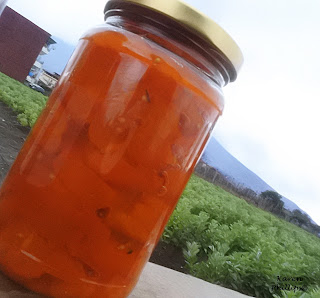 The guys even  harvested an orange tomato, but we will have to just have to wait until next season for a taste...

As Rea worked, I got to learn a little more about Officina Vesuviana - its philosophy, its products.  Besides fresh tomatoes, they make can their tomatoes as soon as they are harvested.  Canned, but in reality they are jarred and vacuum packed in large glass jars.  I had a chance to try and appreciate assai their various pate' made from each variety.  And since we were located nearby the Vesuvius National Park, it would be a crime to not try their mandarin marmalade.  I did. 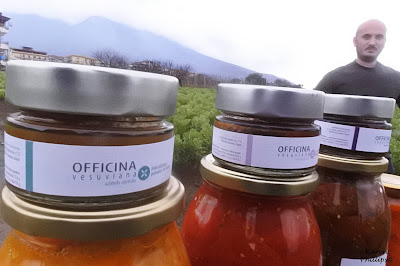 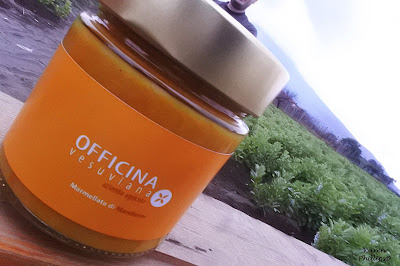 But I wanted a quick recipe-  here Manzo shares one for a quick tomato sauce- olive oil, garlic and a few of their fantastic tomatoes....

It's philosophy?  As it turns out, Manzo is math, science and history enthusiast.  Did I mention the goose bumps I had when I arrived?  They came back.  We spoke about mathematical sequences, mathematicians, acidity, soil and future projects as he pointed out wild herbs, sprouts, and everything else under that cloudy volcanic skyIt was hard to keep up, honestly.  But no problem - because I made them promise to invite me back ---when the fava beans are ready to harvest.  As well as other spring vegetables such as contogiorni peas.  And in the summer?  I did notice that small vineyard of Catalanesca grapes next to the apricot orchid.
Fantasticaaa!


Posted by Karen Phillips at 11:15 PM No comments: