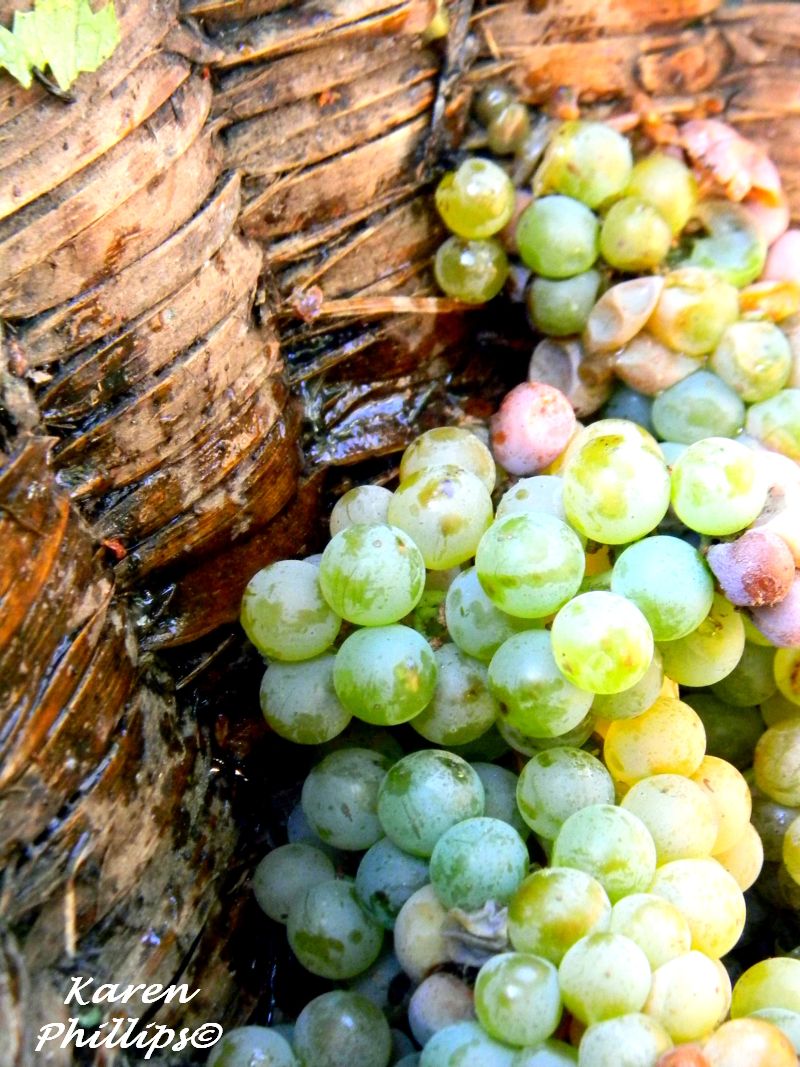 Harvest season - Campania.  For my first vendemmia of 2012, I chose a small vineyard with a big story.  The Asprinio di Aversa vineyard belonging to Az. Agrituristico Arbustum in the town of Casel Di Principe in Caserta...about 30 minutes from Naples.  Asprinio di Aversa- a white grape found in this part of the country has been around a long time, some believe as far back as the Etruscan period. And that explains the training system that many vineyards that produce this grape still use today. 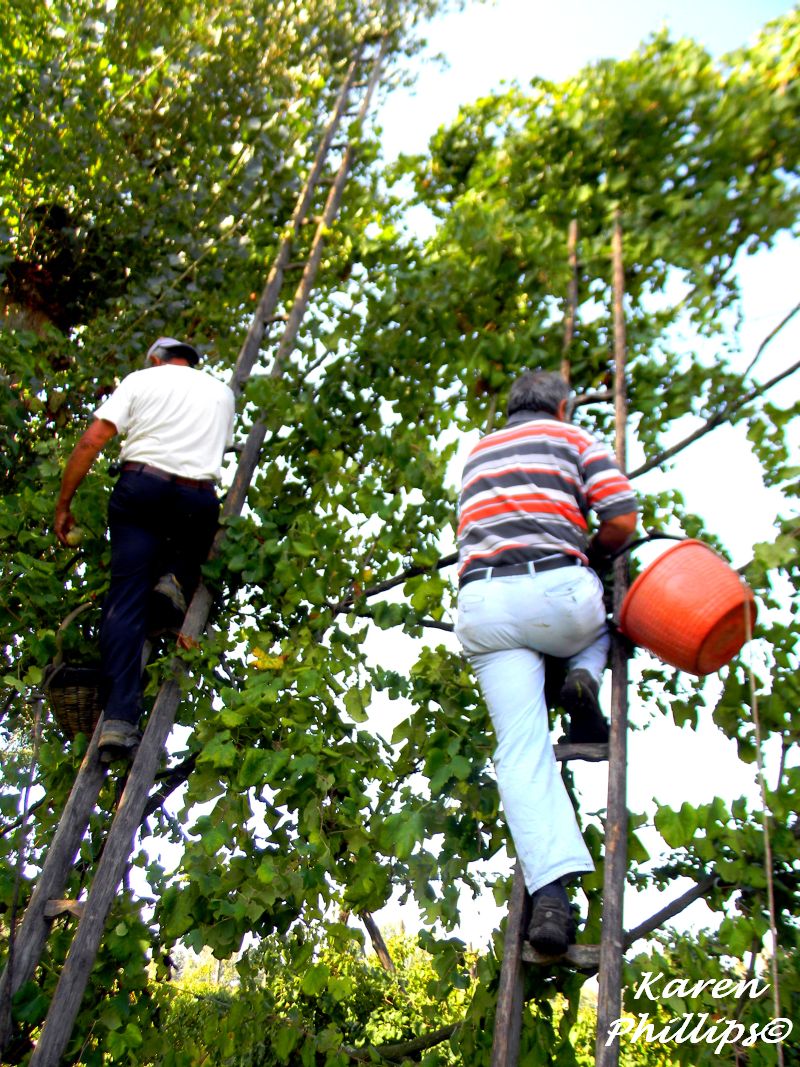 Vines that grow amazingly high -50 to 60 feet.  Vines that are attached or 'married' to poplar trees. Imagine... ridiculously  tall vines reaching up to the sky.  Spectacular to view, but an incredible task to maintain, prune, and of course, at this time of year...harvest. 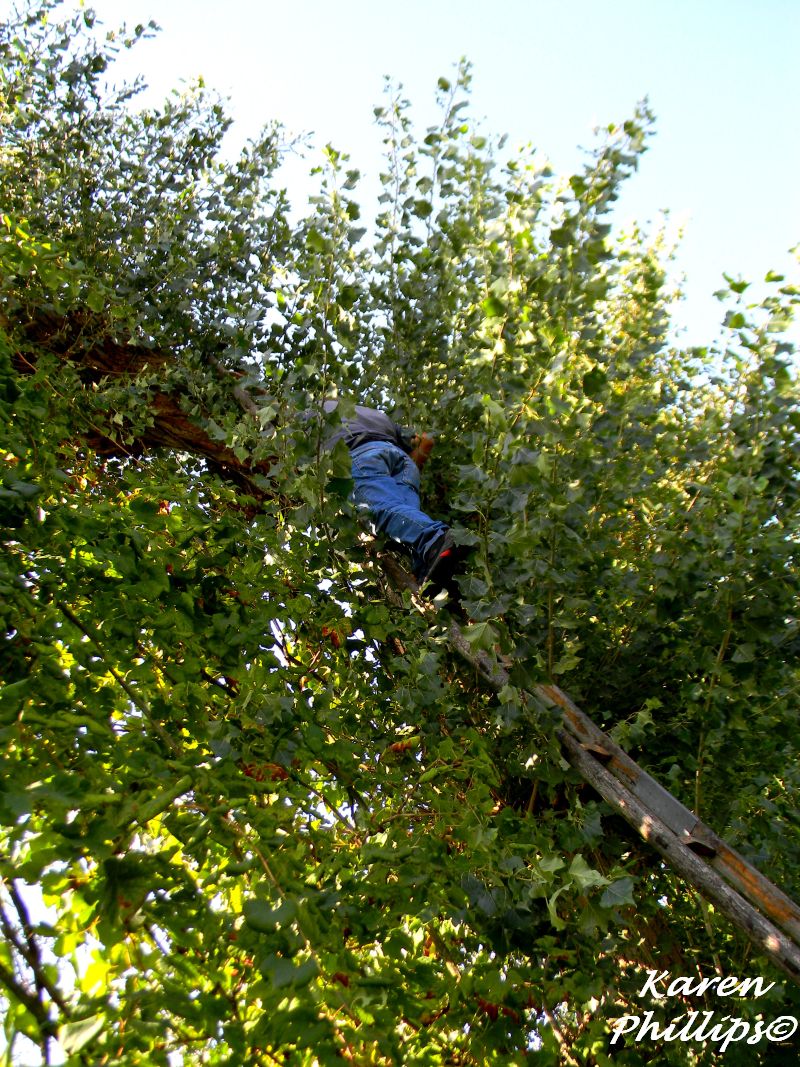 That's where they come in.  The uomini ragno, spider men. And if you ever get a chance to see them at work, you'll instantly understand.   These uomini ragno carry extremely tall narrow ladders. The distance between each ladder rung is measured so that each harvester can hang on to the ladder with one leg so that his arms are free for him to reach up up and over...grasping bunches of grapes with his bare-experienced hands.   The baskets (plastic or straw wicker) float up and down in symphony as the harvests continued.  Crates of grapes being filled before my eyes...a mixture of yellows, greens, and lightly kissed by the sun browns... 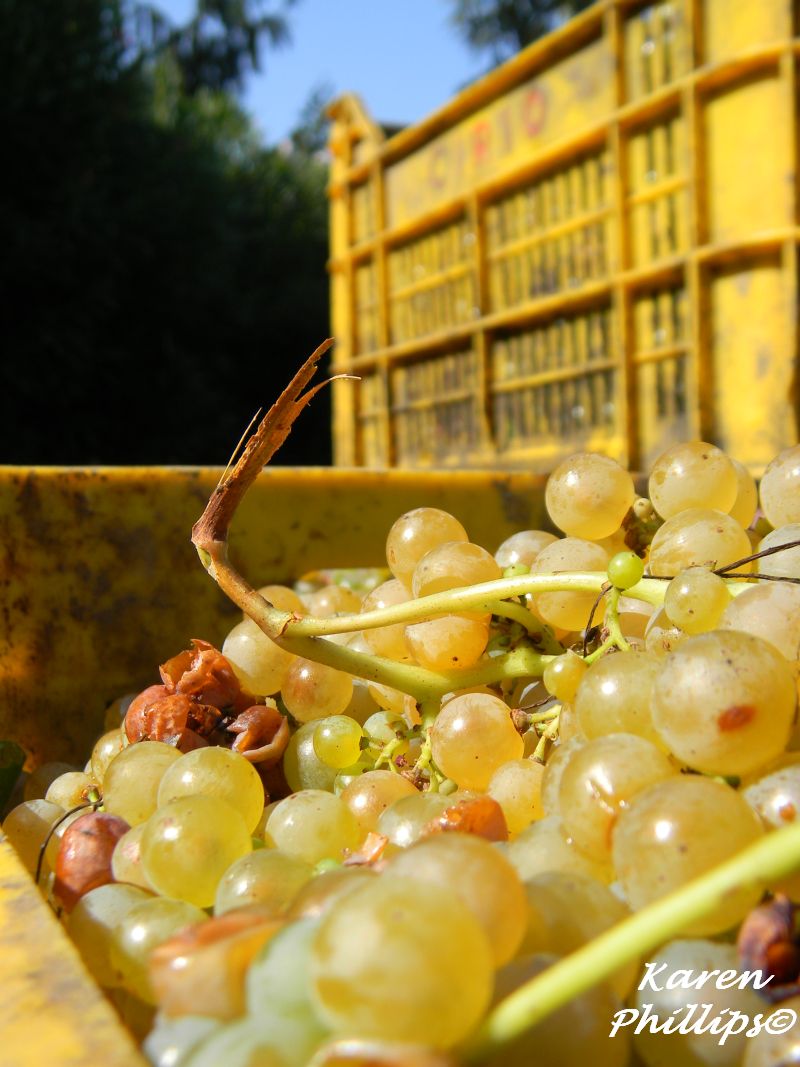 It was breathtaking. I was watching tradition...a dying tradition unfortunately.
Because as exciting as this was to watch, I couldn't help but think about reality.  The reality of how labor intensive it is to maintain a vineyard 50 feet above ground. The reality of how there aren't many young people who are interested in becoming a uomini ragno, a spider man. 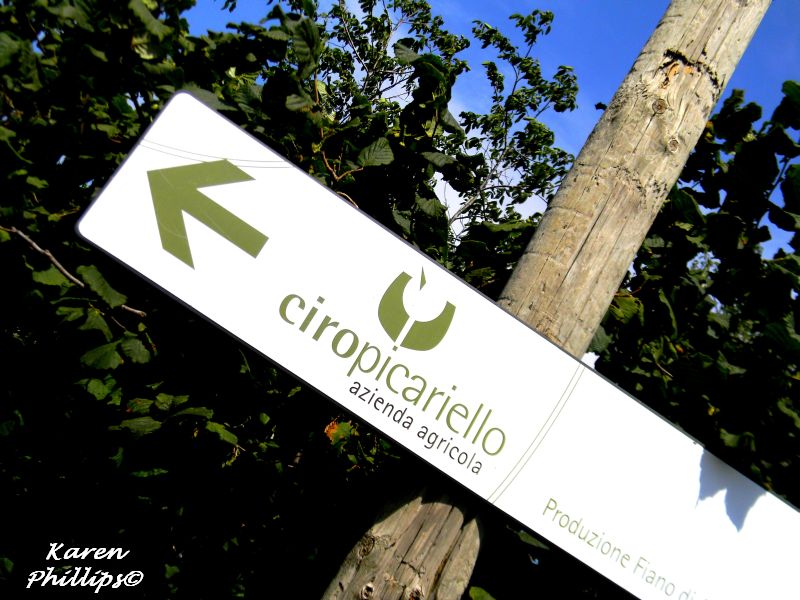 Though I've known Ciro Picariello and his wife Rita for a couple of years, I didn't really know their story. We've bumped into each other at wine fairs, tastings, etc but the first time we really had a chance to talk was recently when I decided to drive to Summonte in the Avellino province to visit them in their small winery. A small winery that has been making big noise over the past few years. But let's go back to the beginning.  And we don't really have to back that far in time.  Ciro does not have a long history as a wine maker, only about 8 or 9 years.  His family hasn't been making wine or growing grapes for generations.  In fact, not at all.  So our story could begin back in the 90s when Ciro was working full time as a surveyor.  Rita had property which she had inherited from her father.  Property which contained olive groves and Aglianico, Piedirosso and  Sciasinasso grapes. Her family made wine for themselves, until about the mid 50s.  They added hazelnut trees which required less work and more profit.  So where does Ciro fit in? 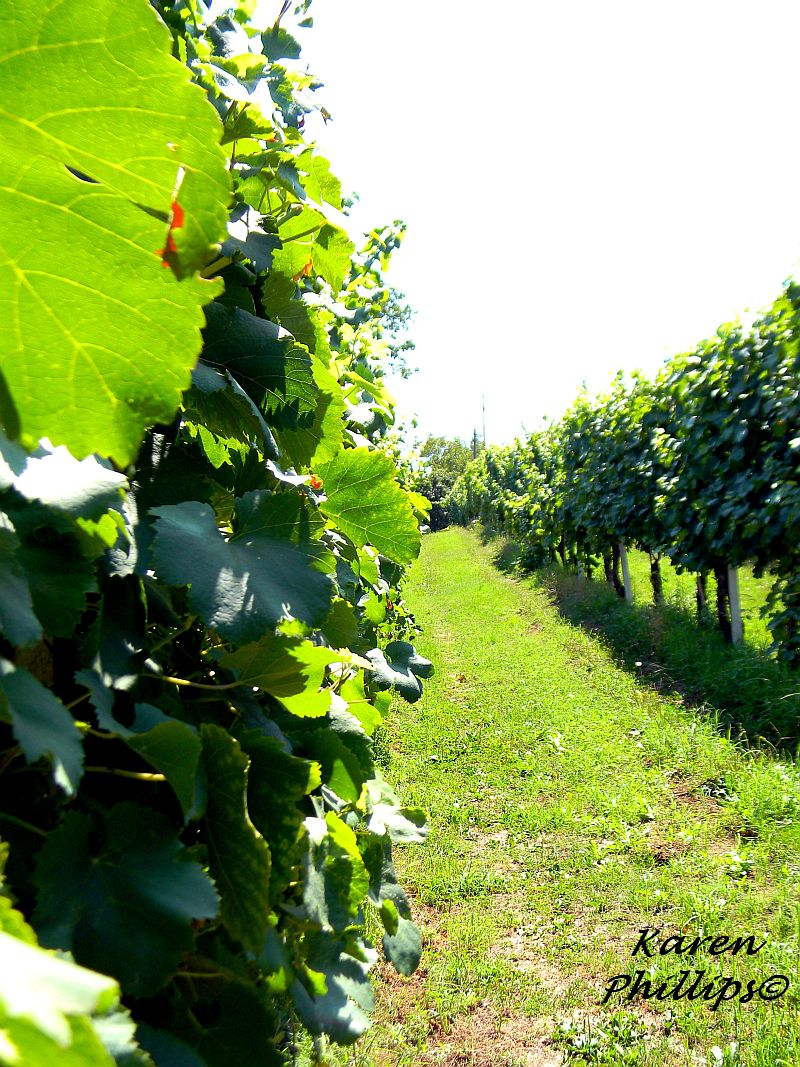 He and Rita decided to do something a little different with her part of the property.  He took a couple of  hectares, cleared away some hazelnut trees, and planted Fiano.  And though he first sought out advice from local grape growers, he decided to further his education by taking courses in agriculture, pruning, and viticulture.  All while working full time as a surveyor.  That was back in the late 90s, when Ciro was growing grapes and selling them to a larger winery.  At the time, most weren't convinced that Summonte was the place for Fiano.  But Ciro was. He also increased his acreage and bought a vineyard in Montefredane about 20 minutes away.  And in 2004 he harvested grapes which would become his first bottled wine, not a large quantity, but a start. 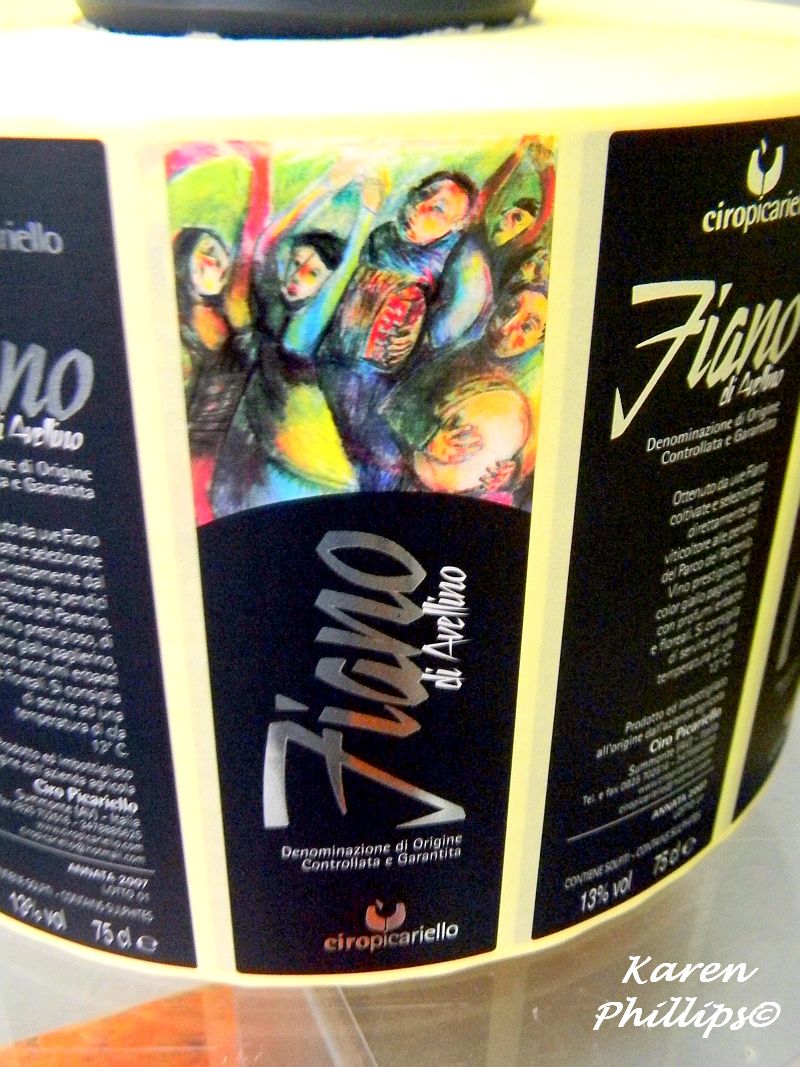 A lot has changed since then.  The first year he used selected yeasts to get fermentation started.  But noticed spontaneous fermentation when he pressed his his 2005 vintage.  Natural yeasts only.  What else has changed?  A passion which has now become he and his family's full time job.  More vineyards, more harvests, numerous awards and recognitions, additional wines to their  catalog using Greco and Aglianico.

But, Ciro says jokingly, his Fiano is his first child. 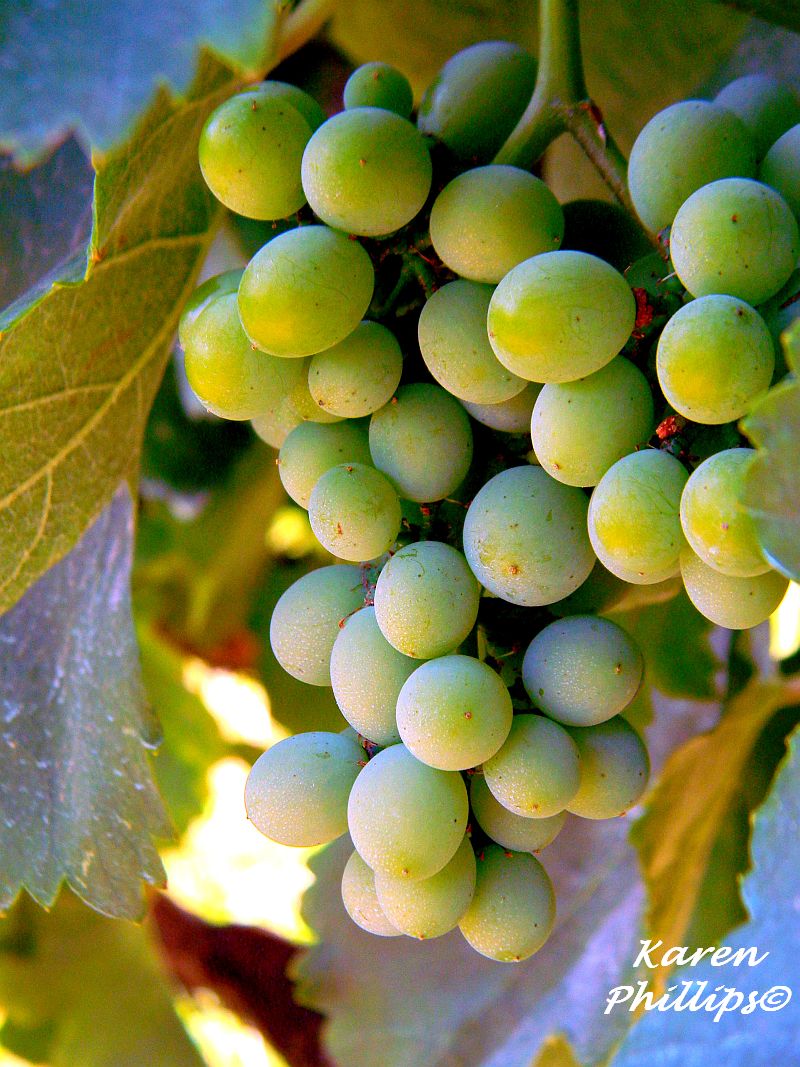 Ciro continued his story as we walked through his vineyard right next to the small winery. It was mid August, and even though the sun was sweltering throughout Campania, we enjoyed a slight breeze as the grapes ripened and matured.  Harvest time is still a few weeks away.  No rush, Picariello just bottled last year's Fiano   the week before my visit.   After months on the lees, he uses cold stabilization avoiding the need to filter his wine. 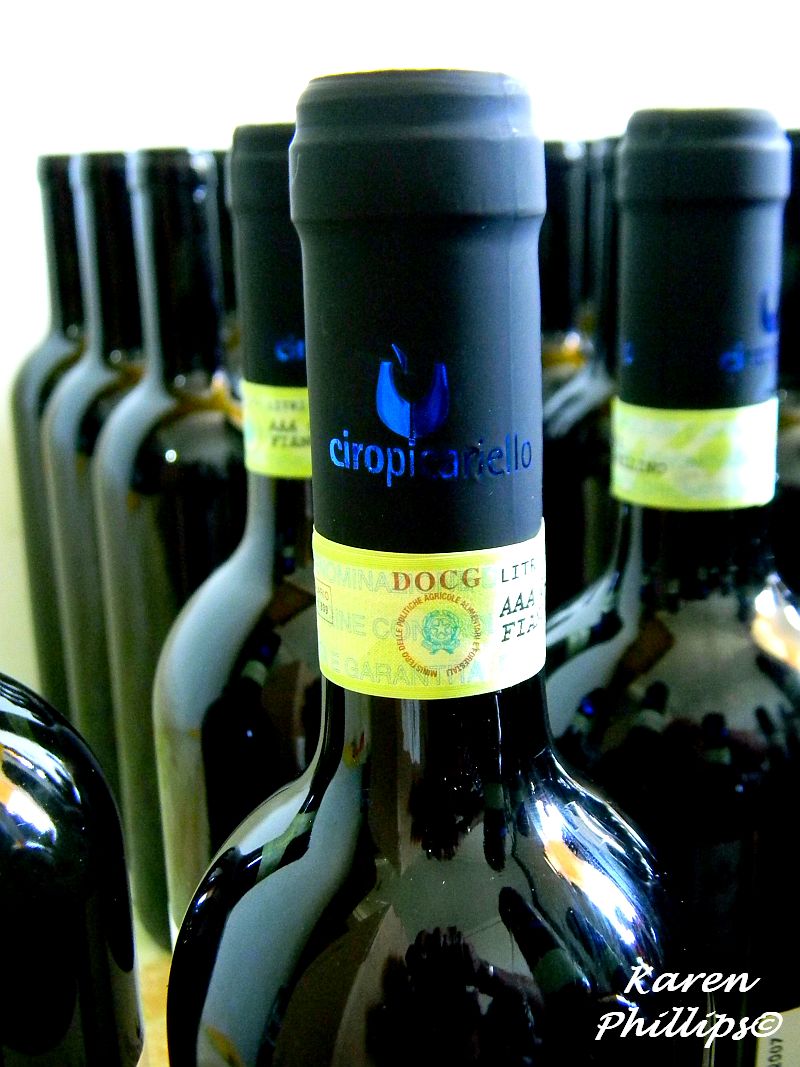 All this talk though led to the next stop on my tour...a small room which Picariello has transformed into a casual wine tasting area.  A room, though small, had everything we needed...a table, chairs, glasses, wine and a corkscrew.  Ciro opened a bottle of his 2011 Greco di Tufo which he bottled about two months earlier. 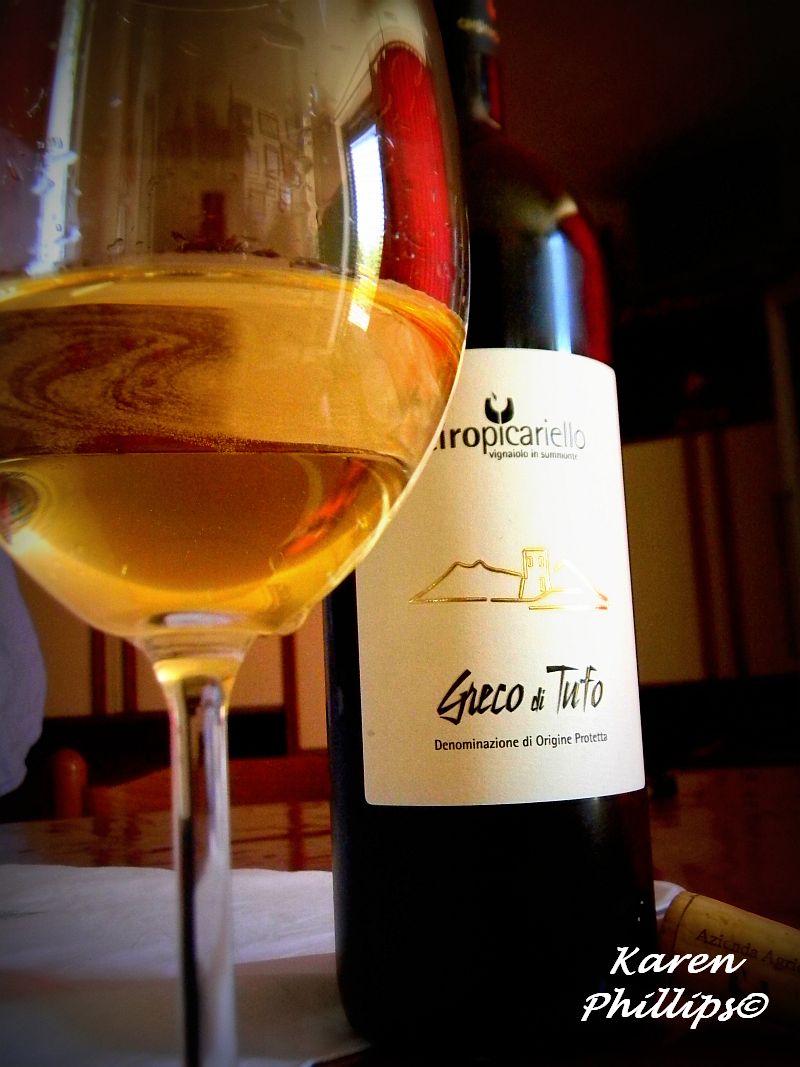 Golden yellow color, a nose full of minerality and a hint of light fruit. A taste and I was greeted with a bella acidity and freshness.  A big hit in California, Ciro tells me.

Next Ciro pulls out his Fiano di Avellino 2010.  As we tasted this wine we discussed what I like to call The Fiano philosophy.  When is a Fiano ready? Some want the current vintage year and sometimes it is hard for wineries such as Picariello's to convince wine stewards and wine shops that waiting a a year or does wonders for this wine.  He's convinced his importer in California, for example. As we were tasting, Rita was preparing an order of the 2007 to be shipped to the states that week. Nevertheless, each vintage has its own story.  I began to explore the 2010 along with Picariello.
Light straw yellow color with aromas of fruit and what? Is that a light touch of honey? Fresh to the palate and at the same time smooth and elegant.  But since we had been talking about Fiano and ageing, and blah blah blah, Ciro decided to open up an older vintage..a 2006. 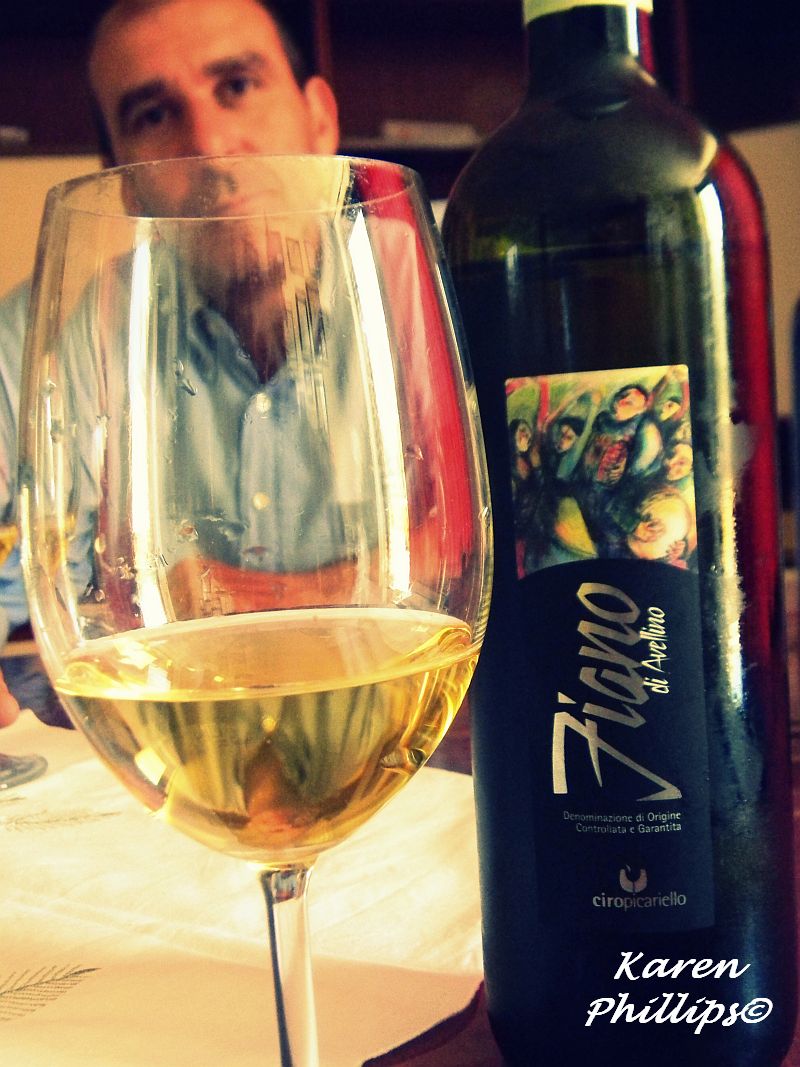 A perfect example of how time can embrace this wine by giving it a deeper color, sweetening the aromas as fruit goes from fresh to secca, dry.  But still that nice freshness when tasted, a beautiful complex structure.  And as much as I enjoyed this glass, I was curious as to what a Picariello Aglianico would be like... 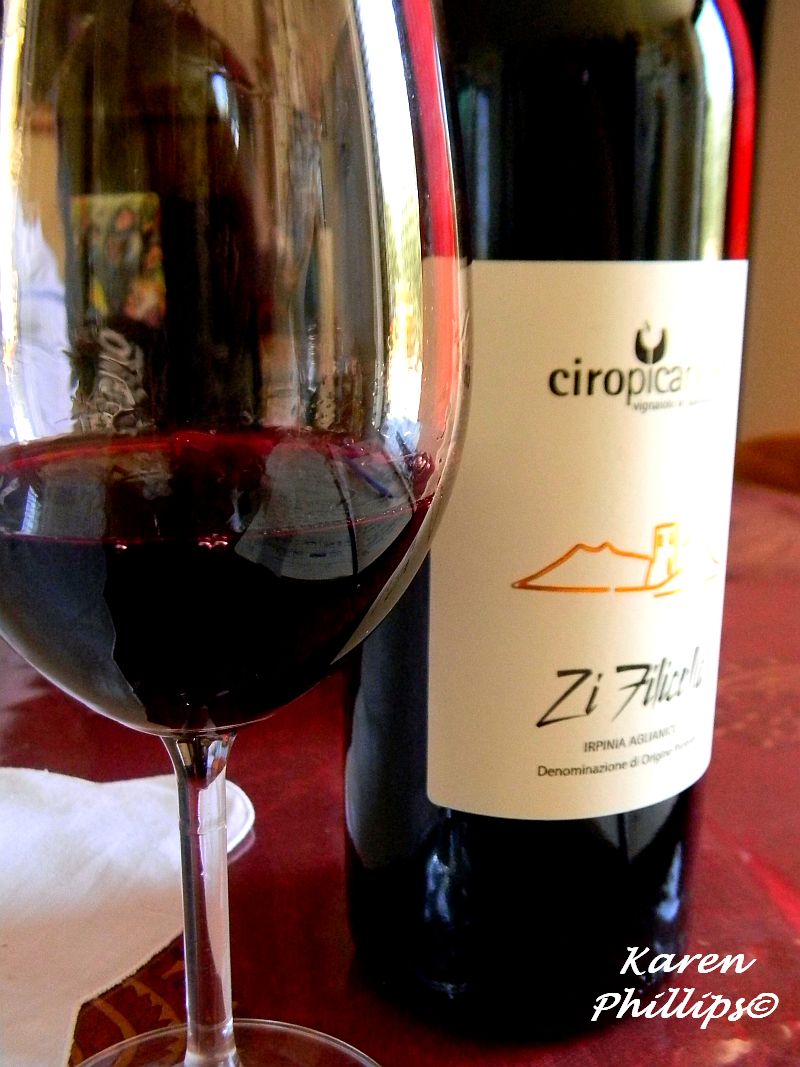 He's been producing this wine since 2006, we tried the 2010 vintage of Zi Filicella. A wine produced from vineyards in Montemarano (Av), aged only in stainless steel. Red fruits, a touch of pepper, light tannins...

Picariello asked me if there was something else I wanted to try.  I thought back to a photo album that I had seen on Facebook a week or so earlier.  Photographs of his new wine...his spumante Brut Contandino. 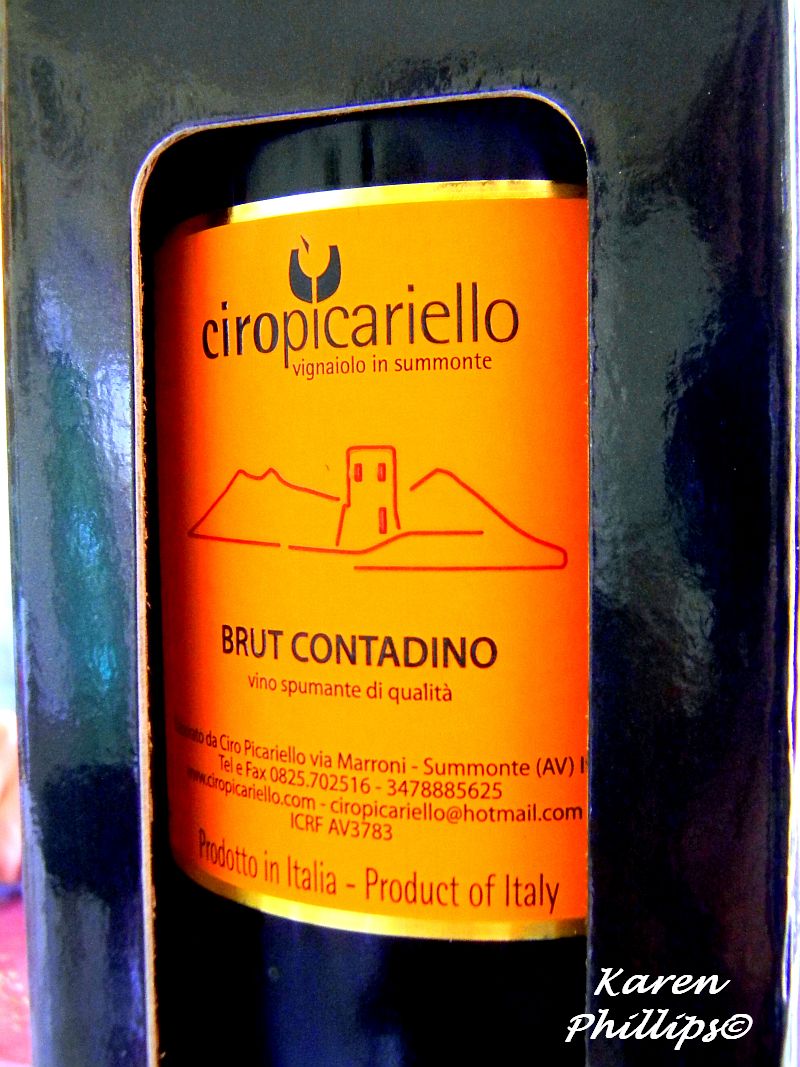 A spumate made with Fiano grapes produced the classic method, with the second fermentation occurring in the bottle, but without disgorgement.   And once you get past the packaging ( the bottle is sold in a box, upside down).  And even the interesting and entertaining presentation performed by Ciro opening the said bottle upside down...(instructions on the box)... 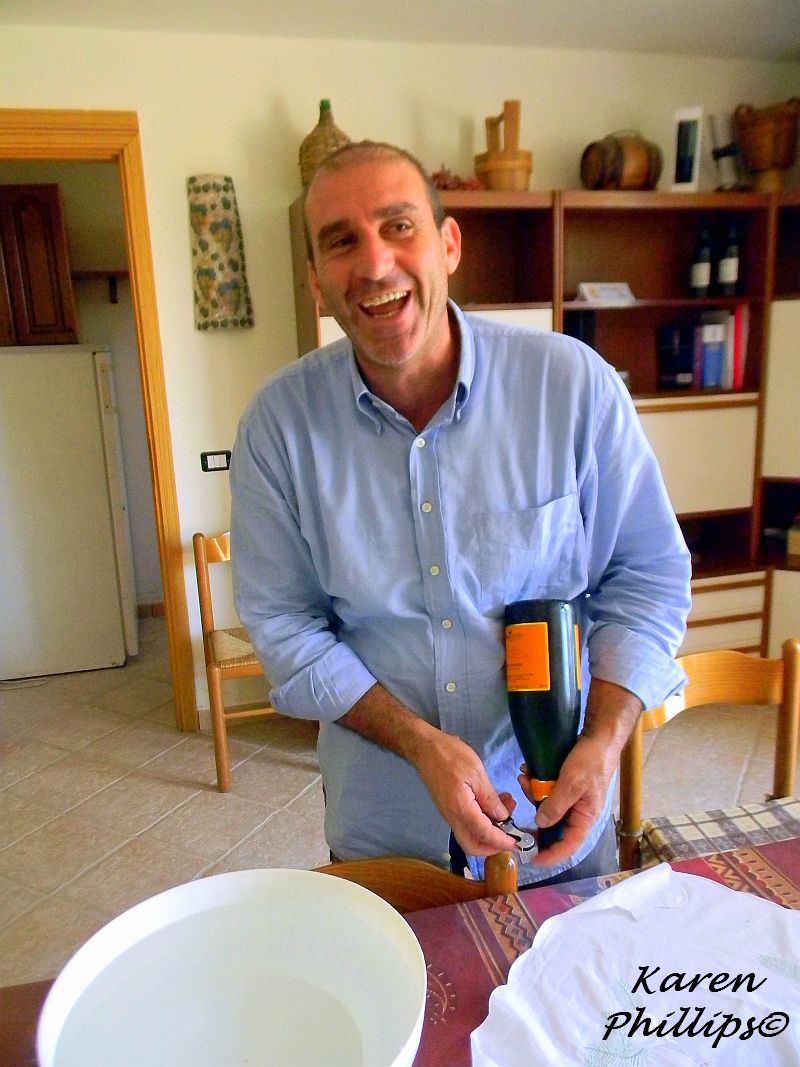 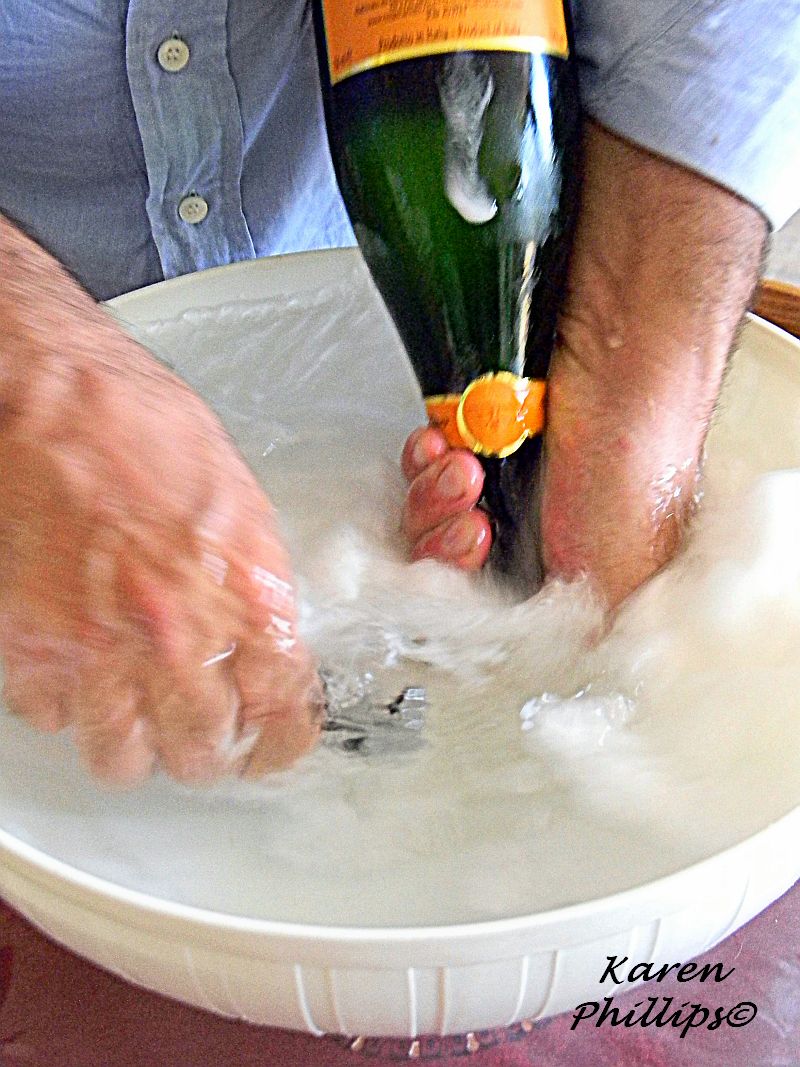 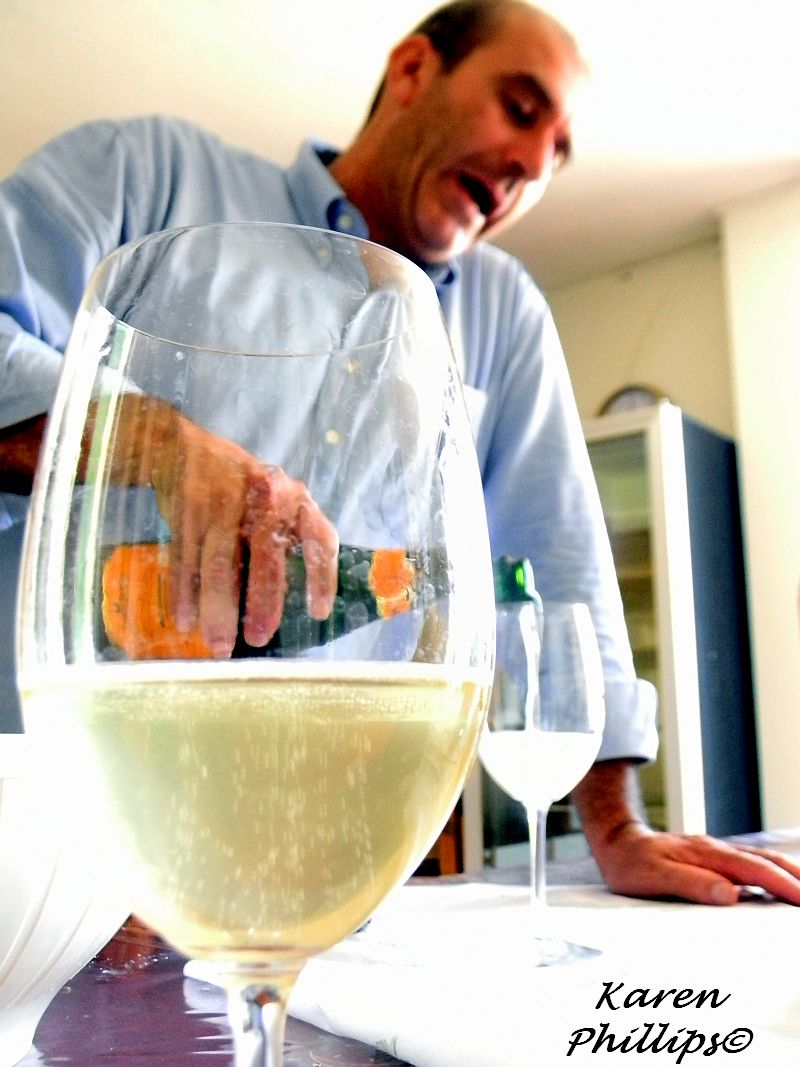 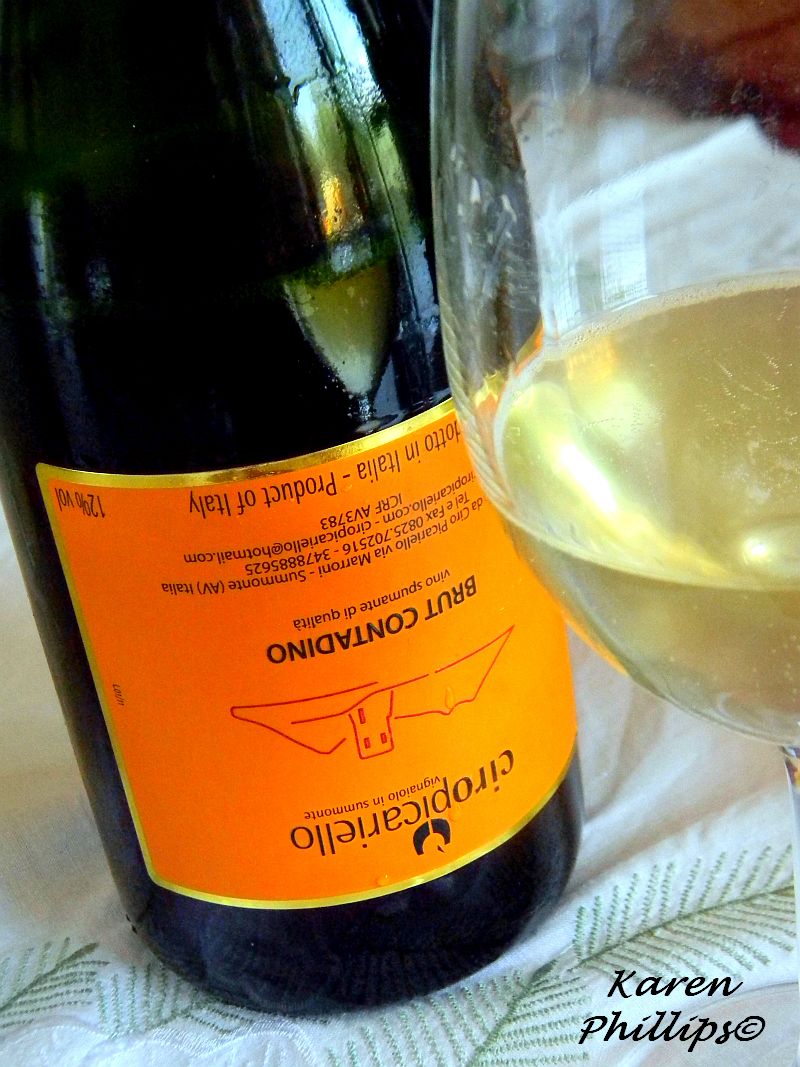 After it was poured in my glass, we have the latest addition to Picariello's Fiano family...a dry spumante with a never ending perlage.  A spumante perfect for an aperitivo on a hot summer afternoon.

An afternoon in Summonte...with Ciro and Rita...

* I saw Ciro and Rita at a wine festival in Montemarano a couple of days ago... Ciro had just received an email the day earlier announcing that his Fiano Di Avellino 2010 had received Gambero Rosso's Tre Bicchieri rating.  Not a lot of time to clebrate, though.  The next morning? Plans to harvest the Fiano grapes for the next edition of Brut Contandino!!!

Posted by Karen Phillips at 10:57 PM No comments: