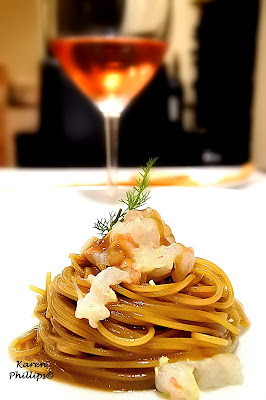 My first visit to Palazzo Petrucci in the heart of Naples was full of fabulous flavors and surprises.  A pasta dish  like this one by by Michelin star chef Lino Scarallo is just one of the reasons why.   Scarallo chose fidelini pasta- a long  pasta whose diamater is smaller than spaghetti.  A wise choice for the sauce which embraced it.  Caffe' - Neapolitan caffe' - whose strong personality melded with fresh ginger and scampi making it subtle...elegant. 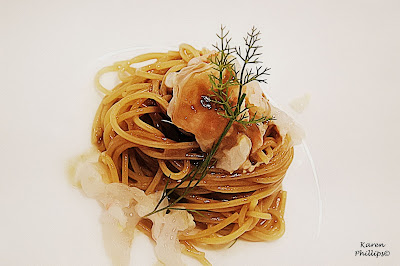 A fusion which is imaginative, creative, friendly, impressive and fantastic.
Like the city of Napoli itself.
Posted by Karen Phillips at 10:37 AM No comments:

A visit to the seaside town of Castellammare Di Stabia was the perfect choice that unusually warm November afternoon.  My destination was Piazzetta Milu' to check out the new menu by Chef Luigi Salomone.  One of the dishes that caught my eye - and taste buds! - was his guinea fowl alla diavola.  The chef served this game bird in three ways spicy alla diavola versions.
The breast with its skin crunchy and croccante. 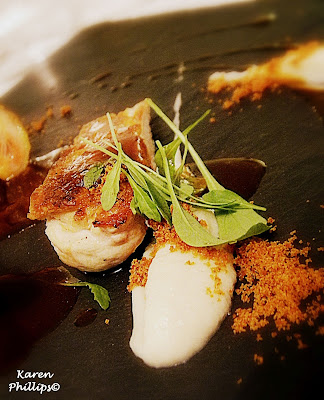 A boneless thigh spicy and piccante. 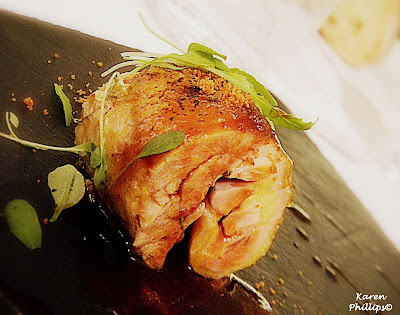 And what's this?  Ravioli shaped like a crest stuffed with flavorful fowl. 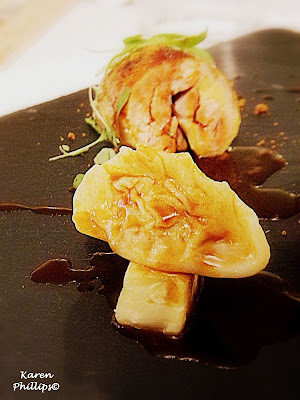 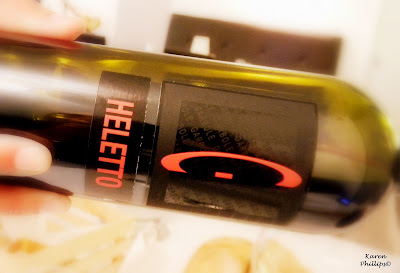 Posted by Karen Phillips at 9:32 AM No comments:

So there I was, one Saturday morning in St Egidio Del Monte Albino having a coffee while googling the pastries at Pepe Pasticceria. Several months have passed since I met Maestro Pastry Chef Alfonso Pepe for the first time during a charity  dinner  at pizzeria,. That evening I had the chance to speak with the chef as he awaited his turn to present his delicious highly sought after desserts.  It was back then, over a slice of pizza, that I asked Pepe if I could swing by his place if I was ever in his neck of the words.  Certo! Of course, was his reply. 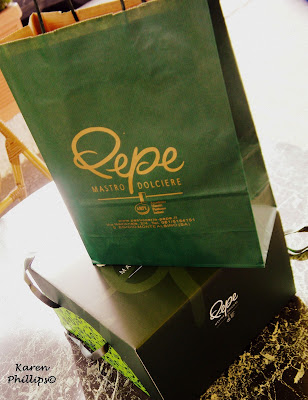 So to assume I was patiently awaiting to be escorted to Pepe who was in his laboratory preparing panettone wouldn't be exactly true.  Goosebumps and butterflies in my stomach would pretty much describe the scene.  Plus, the Maestro was preparing panettone!!   The traditional Christmas cake that has put his on the podium as being the best in Italy back in 2014. 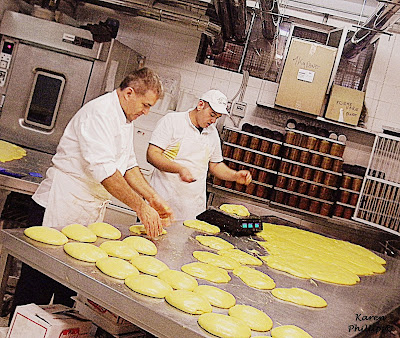 Quite a bit going on as I reached the downstairs laboratory.  A quick smile from Pepe and a joke or two as he asked me if I wanted a bite to eat.  the maestro never stopped moving.  He and his assistants had a lot to do to prepare the countless orders that flow into the pastry shops on a daily basis.  I had the privilege of watching Pepe prepare a couple of versions of panettone - one with limoncello cream, and a traditional one with candied fruits.  I had the privilege of tasting one of his newest creations - one prepared with whole wheat flower and wild berries. 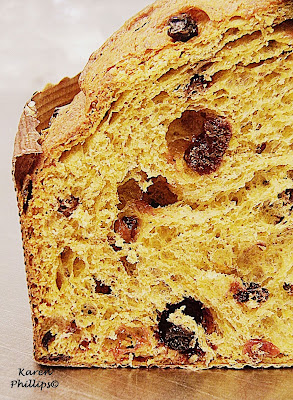 Preparing a panettone is tough work which requires experience, concentration, quality products, and time.  Something that many do not try to attempt at home.  (Details can be found here.)


I'm not a baker by any means, but that didn't keep me from getting caught up in the rhythm in the pastry shop that morning.  Panettone dough from the mixer to the stainless steel table.  From the table to the scale.  From the scale to the experienced and caring hands of Maestro Pepe as he formed them into perfectly shaped circles, then carefully placed them into paper molds where they would rest and rise. 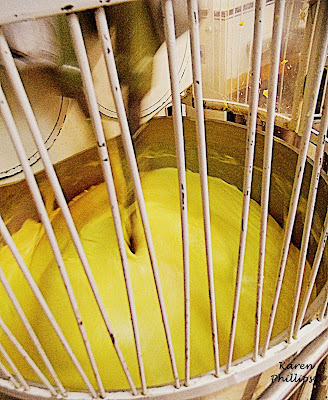 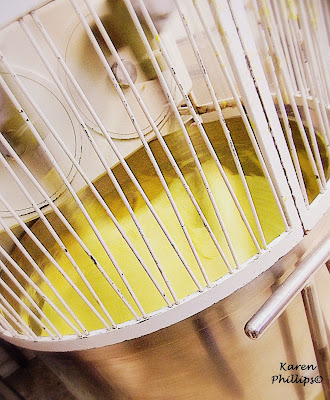 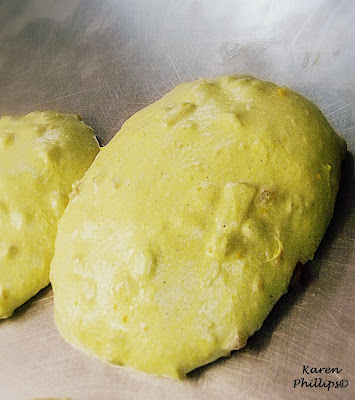 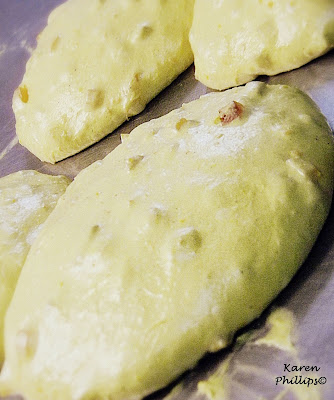 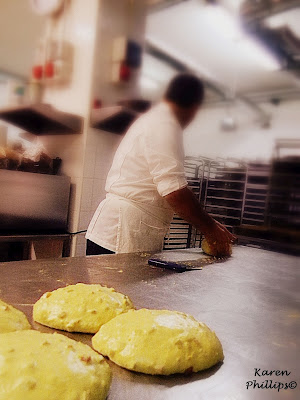 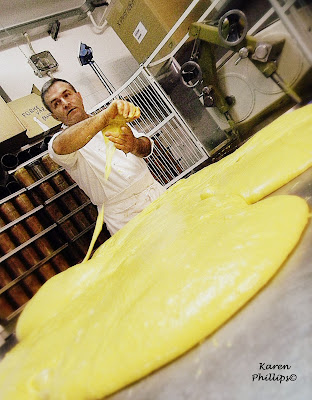 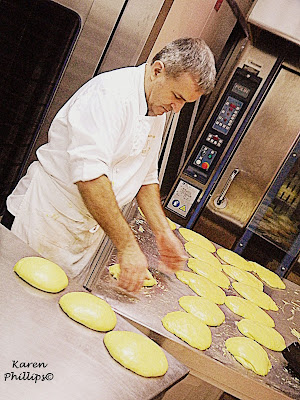 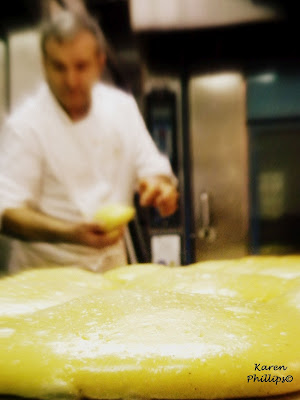 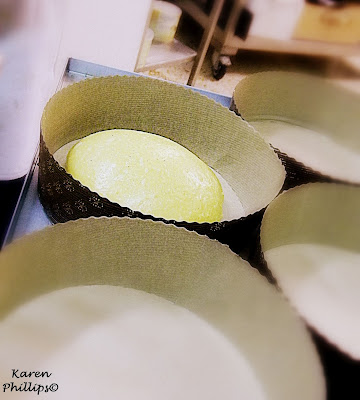 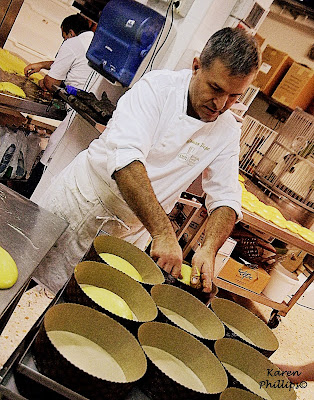 A few more bites of that panettone that was offered earlier, a wave and a smile, I left Maestro Pepe just as I had found him.  Hard at work, whipping out those panettone, with the occasional joke or two.

Come back in a couple of weeks.  I'll be working on my chocolate panettone, he said as I headed up the stairs.

Did someone say chocolate?
A presto, Maestro!  :-)


Posted by Karen Phillips at 10:53 AM No comments: 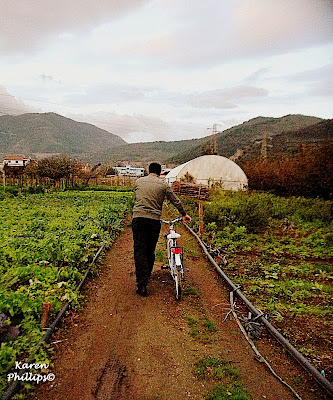 November has arrived.  And though the calendar says we are well into the Autumn season, the weather in Campania has been unusually warm.  One way to tell the change in seasons is by checking out the new menus in some of the regions favorite restaurants.
Like some of the items that I had a chance to try recently by Chef Lorenzo Montoro of Osteria Al Paese in Nocera Inferiore (Sa),  This chef is known for taking simple seasonal ingredients from the territory and focusing on their fantastic flavors. In fact, he spends his days between his family's farm Masseria Piglioucco/ Montoroerbe  and the restaurant.

To get things started, an egg yolk cuddled in broccoli leaves on top of cauliflower and  caciocavallo cheese. Truffle shavings on top added a boost of down to earthiness . 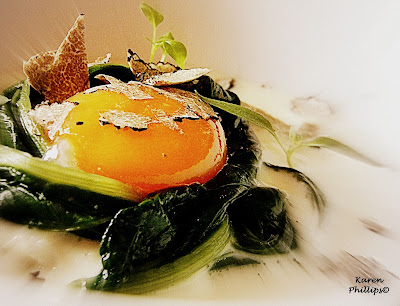 Next, a couple of appetizers, once again, highlighting the simplicity of country cooking, with a slight gourmet flair.  Chick peas; creamy soup and crunchy chips.  A touch of sausage to round out the dish. 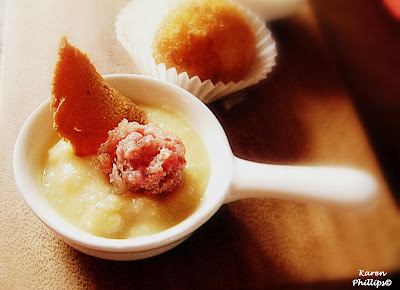 Mellone.  Made with basic ingredients such as potatoes and broccoli leaves, stale bread, garlic and extra virgin olive oil. The chef added a slice of pancetta bacon for an extra punch.  A typical dish of the season. 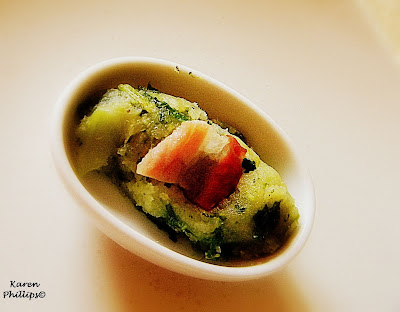 And of course, a fantastic first. Pasta mista with a creamy sauce made with chiodini mushrooms, garlic and milk.  Underneath all that dolcezza? Well, a surprise that you'll have to taste and see for yourself. 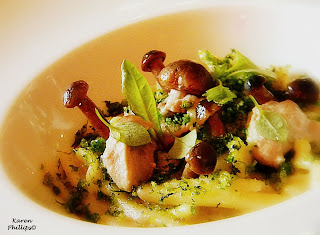 That should give you something to savour.


Posted by Karen Phillips at 10:00 PM No comments: