An Aperitivo on the Beach...Ristorante Marina Grande, Amalfi (Sa) 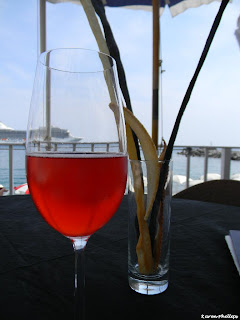 An aperitivo on the beach.  That's what I wanted.  But not just any beach...I wanted Amalfi.  And not just any lido...Ristorante Marine Grande.  A corner table overlooking the beach and the sea was the perfect spot to have a cocktail and conversation with owner Gianpaolo Esposito and Chef Umberto De Martino.

I soon learned that Marina Grande is one of the oldest lidos in Italy, dating back to 1918.  They moved in 1935, and opened up their restaurant in the 1950s. Gianpaolo served me a cocktail, Apois, which I sipped while looking over the menu and the wine list.  A menu rich in seafood, home made pastas,including a tagliatelle made with 33 egg yolks, and  homemade desserts.  A wine list 300 strong- heavy in the Campania region.

I was undecided on what I wanted to try so Chef De Martino chose for me.   A tuna fillet in poppy-seed crust with panzarella (bread salad) and buffalo stracciatella. Then peas in three textures with fresh cow cheese, orange and marinated prawns.  These I enjoyed while Espsoito continued to talk about Marina Grande.  How during the day, you can relax on their beach, enjoy a light lunch or a pizza at their second restaurant downstairs.  Several evenings a week they organize special events such as jazz nights and live music.