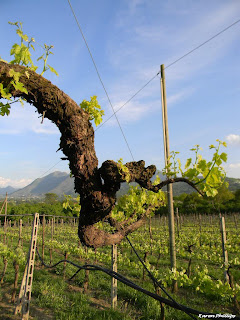 Springtime in Cesilnali (Av).  I followed wine maker Luigi Sarno on a stroll through his family’s vineyards. Cantina del Barone. It was late afternoon…not quite dusk. The sun shone lightly and playfully. Not too brightly, so I could get a good look up close at this special time of year in a grapevine’s life-the fioritura, blooming period. The period when there is a beautiful contrast between the brown vines and the young green leaves and tiny grapes. I stopped at one vine in particular. One that seemed to tower above the rest. It was more like a tree than a grape vine. That one? Over a hundred years old, Luigi mentioned.

We continued walking, past the peacock, past the chicken coop, to the path that led to the house. A path that practically divides the Sarno’s vineyards into two sections. On one side, vineyards that were planted in 1987. Nearly 2 hectares of vineyards planted in rows of 2m x 2 m with sun exposure east/west. With these grapes, we make our Fiano di Avellino DOCG, Sarno mentioned. A wine that the family has been bottling since 1998.

But over here, here is a different story…
Over here was a piece of the Sarno’s property known as particella 928. A five sided polygon piece of territory that takes up about ½ hectare. This part of the vineyard was planted by Luigi in 2001. But Luigi wanted to try something different. He altered the position of the grapevines. These rows were facing north/south to get more out of the sun that hits Cesinali during the day. Luigi pointed out the slight difference in the size of the leaves on these vines in respect to the ones I had seen earlier. Then, another key point…To get the most out of his vines, he has the rows set up 2 ½ m apart and 1 ½ m between each plant. One more thing, Karen…Luigi points down so that I can see the bottom of the vine. The part where the vine hits the dirt. It was here that I could see that some of the area around the vine had been cleared away, exposing the roots. Why?...These top roots would be cut off. That way, the older, deeper ones will continue to dig deeper into the earth in search of moisture…in search of rich minerals in the clayey, pebbly soil.

At this point, Angelo Muto caught up with us. It was time to go to the cantina , see what was going on there, and taste a couple of wines. Though our day was focused on Fiano, Cantina del Barone in the past produced Aglianico, Taurasi, and even Greco di Tufo.

That was then, this is now…we headed towards the first vat.  The vat that held Barone’s 2010 Particella 928. Wine produced from the small vineyard that I had seen a short time earlier. The three of us examined a glass of wine which was still maturing on the lees. Sarno pointed out the aroma of carbon dioxide present-important since this was protecting the wine from oxidation. A few more weeks and it will be racked, filtered and bottled. 5,000 bottles of Particella 928 DOCG. Luigi showed me two versions of the label…each with a design of the 5 sided polygon shaped vineyard.

The next vat was their base Fiano. This vat had already been filtered and did not mature on the lees as the previous wine. So this glass had a ‘cleaner’ nose. Slowly fruit aromas began to open up…a slight touch of hazelnut. Almost ready, Luigi said to Angelo and I…and I believe to himself as well.

It was starting to get late, I had a long ride home. Luigi was locking up the cantina and noticed my gaze at a vine that was growing through a hole in a nearby concrete wall.

Karen, this is a Sciascinoso vine. He had noticed it a few years ago growing out of that wall. He gave it a little direction, every now and then guiding it upwards until it had finally found its own way and flourished on its own.

I wondered if Luigi noticed the similarities between that vine and his winery. His winery, that over the years, he has been guiding and directing upwards. How it is flourishing in the eyes of the press and wine enthusiasts alike.

Posted by Karen Phillips at 4:23 PM