A Taste of Vignaviva at Vinitaly

Last week was a busy one for Gruppo Vignaviva. It was  wine week in Veneto, and Gruppo Vignaviva, the brain child of winemakers Fortunato Sebastiano and Gennaro Reale.   Veneto gave them the perfect opportunity to showcase over a dozen of their wineries at Vinitaly, Vivit, ViniVeri, and VinNatur. Wineries from different territories who all shared a common belief.  Great wine begins with a great grape.  And if that grape is grown organically, even better.  Nearly all of Gruppo Vignaviva's wineries are certified organic.  Those who aren't are seriously considering it.
I made an appointment with a busy Gennaro Reale for 1230 ish  on Tuesday the 27th.  He had just arrived at Vinitaly after spending the morning nearby checking in on some Vignaviva's other wineries at ViniVeri just a half hour away.

We met in the Campania Pavillion and  headed straight to Irpinia...to a brand new winery called Vigne Guadagno. 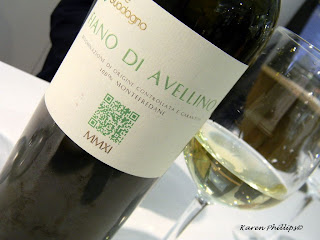 This was their first Vinitaly so Reale shared with me samples that the winery had brought with them straight from the stainless steel vats.  Their wines aren't ready to be bottled yet, he told me.  They need more time. Like a Fiano di Avellino 2011 from vineyards in Montefredane.  Vineyards that Reale felt would give this wine beautiful aromas and freshness. 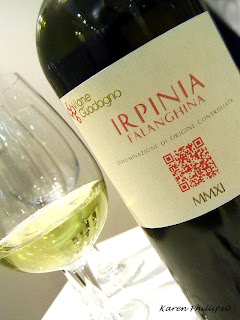 Greco di Tufo 2011 from vineyards chosen for a fusion of freshness and minerality...Chianche and Tufo.  Falanghina Irpinia DOC 2011 spends a few hours with the grapeskins during maceration.  Two to three months maturing on the lees to produce an elegant wine.  We then tasted a very young Aglianico 2011 from vineyards in Montemarano and Paternopoli.  An Aglianico that sees only stainless steel, no wood.  A wine that Reale hopes will communicate what the vine and the wine has to say...

From this young winery, we moved on to winery with a few more harvests under its belt...Calafè.  Their first harvest was back in 2006.    Our first glass Reale poured me was a Greco di Tufo DOCG 2009. Product of a late harvest and 12 - 18 months maturing on the lees.  Product of owner Benito Petrillo belief in aging his wines for a long period before putting them on the market. So it was interesting to taste Calafè's Greco di Tufo DOCG 2006 immediately after.  To note and discuss differneces and similarities.  A naso di Riesling, Reale told me, meaning that he smelled aromas typical of Reisling. 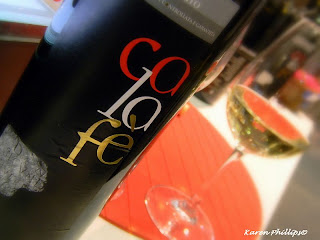 I didn't remember tasting a Taurasi from this winery during the premiere of the 2008 vintage a couple of months back.   That's because it's still maturing, Reale told me.  So he poured a glass of the their newly released 2006.  A glass of intense ruby red wine from vineyards in Paternopoli, Montemarano and Castelfranci.  A Taurasi that spends extra time in wood...2 years.  Big oak barrels, not small barriques. 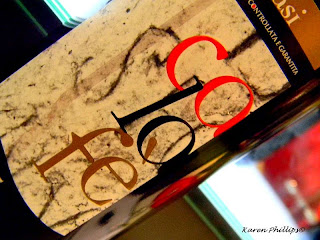 Since we had passed on to the reds, Reale decided to take me to taste Terre Irpine.  Aglianico Irpinia 2008 from vineyards in Castelfranci.  I was learning to note and appreciate how Irpinia's Aglianico can soften nicely with a long maturation period, and without time spent in wooden barrels.
Terre Irpine uses barrels only for their Taurasi, so we tried a few.Primo della Corte 2007...an Aglianico which could be considered a little Taurasi thanks to 12 months in barriques.  We let our wines do what they want to do, Reale tells me.   Well, I was curious as to what their Taurasi DOCG 2006 wanted to do.  I believe this wine, and their Taurasi Riserva 2005 wanted to share with me a array of spectacular aromas, deep dark colors.  With a profound, dry,  asciutto taste... 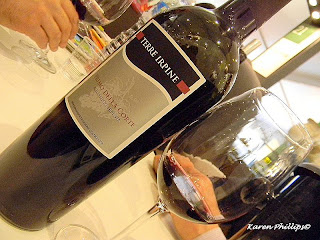 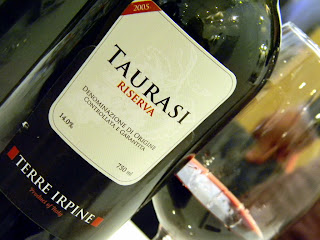 I believe that this wine, along with all the wines I tasted that mid afternoon wanted to share their territories, their stories.

I believe I needed another appointment with Reale, but not in Verona.