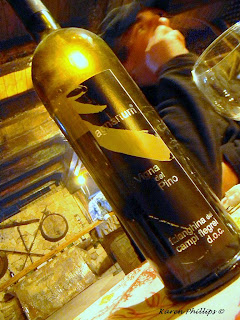 I’m not sure I would have found the place if I didn’t run into winemaker Maurizio De Simone on the beaten path.  All I had to do was take the Agnano exit and turn right after the  roundabout.  A roundabout that I have been going around five times a week for the last 15 years or so on my way to work. I never imagined, however, that if I turned right and followed a dusty road I would find one of the most amazing vineyards I have seen in my life.
So there was De Simone, hanging signs to help lead me to Azienda Agricola Agnanum…Campi Flegrei’s little secret.  At the end of the road, De Simone introduced me to Raffaele Moccia, who along with his father Gennaro takes care of their vineyards that have been in the family since the 60s.  Vineyards that grow in sandy, dusty, dark grey volcanic soil 500 meters above sea level.  Falanghina and Piedirosso here…nothing else.  That is Campi Flegrei. 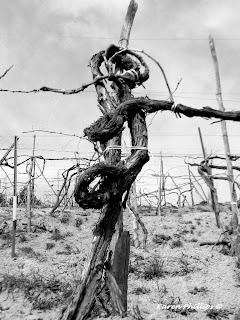 Walking through the vineyards with Moccia was like a trip back in time.  Tradition is what this territory calls for, etched in the side of a hill.  Manual labor, everything by hand.  The hands of Raffaele and his father Gennaro.  His 82 year old father Gennaro who, though it was a Sunday, was hard at work in the vineyards.  Hard at work swinging a heavy hoe to rid the terrain of the weeds surrounding the vines.  Weeds that would take away from the nutrients in the soil needed for their grapes but would also serve nicely as compost to help them grow.  Grow as many of the vines have been doing since pre phylloxera times.  Some 100, no, 200, nearly 300 years old. Practically monuments that have withstood this practically lunar like terrain.  And will continue to stand.

Raffaele took me two see two particular areas of his vineyard, the areas where he produces his 2 crus; Vigna Del Pino for his Falanghina and Vigna delle Volpi for his Piedirosso. Pino…why? There’s a pine tree overlooking the vineyard, overlooking the city.  And volpi means foxes.  Those same foxes that visit Moccia’s vineyards during harvest season.  The foxes that enter through a hole in a stone wall that separates Moccia’s property from the WWF Oasis of Astroni…the hunting grounds of royalty in the 15th century… Foxes that enter and pick grapes one by one for their enjoyment and not that of Moccia.  Moccia who waits patiently to harvest his grapes…often until late October, early November.  Grapes that turn to must that take their time to become Agnanum’s wine.
It was time to visit the cantina, to taste Agnanum’s whites and reds and to have lunch.  A quick tour of the small winery… Moccia produces around 8,500 bottles a year. Late harvest as mentioned before…a year in stainless steel vats before bottling…no rush, tradition… 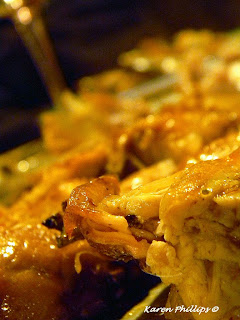 In Italia, wines are tasted with a meal, so Moccia led me into a wine tasting room DIY.  One that he carved out from the side of the hill.  One with a long table for guests and family…wine bottles on shelves on the wall with older vintages waiting to be shared.  Over in the corner, a barbecue was blazing, full of bruschetta that we added a bit of pancetta for flavor.  A little cheese and we were set with our appetizer paired with a Falanghina 2010 that bent the rules.  I would never have thought to pair it with this well aged in a grotto cheese full of flavor…but it held its own.  A quick glance at the barbecue and I noticed chickens and rabbit.  All raised by the family.  What? I didn’t mention that Raffaele raises rabbits as well? And that his rotisserie chicken stand is one of the most popular in Naples?  (well, another blog…) 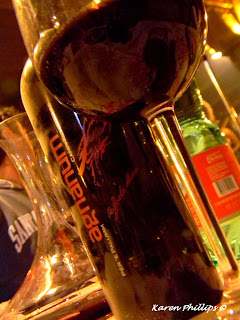 Barbecued chicken and rabbit…prepared with Moccia’s seasoning, to be eaten with your hands and accompanied with a glass of his wine.  We played around a bit with the older vintages…Piedirosso 2003, 2007…Vigna Del Pino Falanghina 2003…Vigna delle Volpi 2003.  Each showing that Moccia and Campi Flegrei have something to say.  All it needs is someone who is ready to listen, and taste for that matter.

Raffaele Moccia and his father Gennaro are often referred to as heroes.  Heroes because every day (including Easter, Ferragosto, and Christmas) they are out in their vineyards. Rain or shine…producing wines that represent their philosophy, their dreams.  Heroes? Maybe…
But that day, the day I ran into winemaker Maurizio De Simone on that beaten path. That day he introduced me to Azienda Agricola Agnanum, 5 minutes from my daily drive into work…I saw two humble men whose hard work produces exciting results in the bottle, in the glass, and at the table…
Azienda Agricola Agnanum
via Vicinale abbadonata agli Astroni 3
80125 Napoli
39 081 230 35 07
Italian Version
Posted by Karen Phillips at 9:06 PM