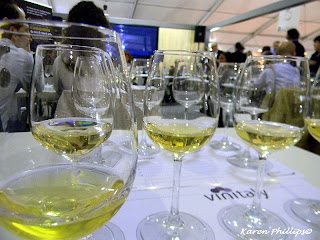 When I arrived at Sala Fiano in the Campania pavilion, I noticed that every seat was taken.  I wasn’t worried, though.  I had reserved for this wine tasting several days earlier.  Un Millennio di Fiano…a trip through ten different vintages of Irpinia's Fiano di Avellino.  A journey in a glass to bust the myth.  You know, the one that has us to believe that Southern whites are to be drunk young. But this Fiano di Avellino, DOCG since 2003, was ready to prove otherwise.
Our trip through Irpinia was led by journalist Antonio Paolini who shared with us a brief background on the particular vintage year, gave us pertinent information on each winery’s winemaking processes, as well as their different territories. We were then treated to a guided tasting by sommelier Alessandro Scorsone.
When we taste a wine, we are tasting a philosophy, Scorsone shared. 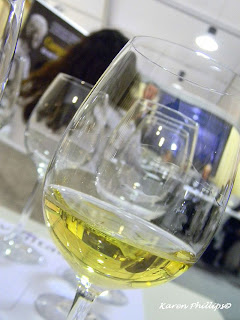 But it wasn’t a contest to see who was the best.  At least I didn’t view it that way.   Instead, it was a trip through time that we each spent observing, breathing in, and experiencing  a wide range of Fianos. Fianos who could stand the test of time.  And that was exactly the intention of this tasting.  Wineries?  Share your stories…build up a warehouse of your older vintages.  Let the public taste them whenever possible.  Journalists?  Spread the word…Campania’s Fiano di Avellino is a wine that could stand side by side with some of the best French whites.  Restauranteers? Sommeliers?  Add some of the older vintages to your wine list.  Suggest them to your clients.
It would be a message well worth hearing…and observing and tasting, and experiencing.
Italian Version
Posted by Karen Phillips at 2:02 PM