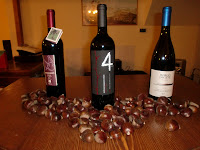 One of the things I love about starting this blog is that it has given me the incentive to get out to events so that I will have something to write about. Tintore Day, the 3rd of November was one of those opportunities. Cantina Astroni, located a few minutes off the Agnano exit hosted an event to introduce the media and wine enthusiasts to a wine made from an ancient grape…Tintore. According to DNA testing, explained to the audience at the ‘press conference’ by enologist Fortunato Sebastiano (from Cantina Reale), the Tintore grape is ‘" un figlio" dell'aglianico e della tintora.’ In other words, is related to the Aglianico grape. This was interesting to me since I am a grande fan of Aglianico. During the round table moderated by wine and food journalist Luciano Pignataro, I learned not only about this forgotten grape, but the hard work and dedication of men who have a strong desire to share with the rest of the world their love for their wine, land and culture.
Tramonti, near Amalfi is where this wine is produced. Tra-monti literally means between the mountains. The vineyards are located on steep hills. it can get very windy and cold. Many vines are a couple of hundred years old. Enologist Gerardo Vernazzaro (of Cantina Astroni but also collaborator with Monte di Grazia) expressed that “it is not only a pleasure to work in these vineyards, it is an honor.” As he spoke, a slideshow was being presented in the background with beautiful photos taken by Gianni Lamberti. These photos of the cantinas, the vineyards, and the Tramonti region made me want to go on a road trip after the wine tasting.
After the wine experts, we had a chance to hear from the owners of the three cantinas represented that evening; Luigi Reale from Reale, Gaetano Bove from Tenuta S. Francesco, and Alfonso Arpino of Monte Grazia. Each shared their story of how they began, and their uphill battle to have their wines recognized as a DOC instead of an IGT (table wine). As they spoke, I was able to see men who were doing what they loved to do, despite the challenges and difficulties. They immediately earned my respect.
What is a wine tasting without doing just that….tasting? The event, cosponsored by Ais Napoli, had several sommeliers on hand to help me understand just what was in the glass( including friends Franco De Luca, and ‘Louis’, a dear friend who was our sommelier on a trip to Torre Gaia a couple of years back). All three cantinas presented wines with different percentage levels of the Tintore grape. After trying a few, I decided that my favorite was Borgo di Gete Tintore Igt 2005 from Azienda Agricola Reale Andea, 100% tintore.
With only about 10,000 bottles produced a year, with the first bottles on sale in 2005, this old wine is new again. As Antonio Amato, a delegate from Ais Costa d'Amalfi put it, “Forza Tramonti, Forza Tintore!”
Posted by Karen Phillips at 10:42 AM