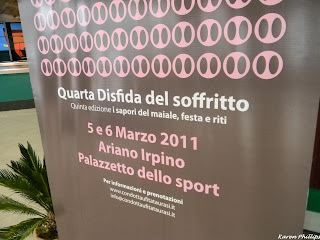 When Slow Food Irpinia Colline dell’Ufita e Taurasi invited me to attend the 4th Annual Disfida Del Soffritto in Ariano Irpino as part of the technical jury, I was honored, flattered, and excited. I would have a chance to sit in on a battle for bragging rights on which community had the best traditional recipe for this pork based dish.

In Irpinia, in the Avellino province, soffritto is a dish which is traditionally prepared using a caratella di maiale, pork organs such as lung, spleen, intestines and heart. It is sautéed in sugna (pig fat)…not stewed and depending on who you talk to, other ingredients such as tomatoes, potatoes, rosemary, and bay leaves can be added to the mix. It is served with day old bread, and of course, hot peppers…the hotter the better!

So how do you judge tradition? Particularly a traditional dish which can vary greatly from town to town…county to county?

Non era facile…It wasn’t easy. But it was sure fun!

After a bite (or two…or three) of each dish I needed to give my evaluation in three areas. What did I think about the difficulty in the preparation of each dish? 3 to 7 points. How was it presented? Appealing to the eye? 1 to 3 points. And last but not least, how did all the flavors balance… or did they? 5 to 9 points. But our table wasn’t the only jury that day. The teams were up to see who would win the popular vote as well. About 500 visitors that day voiced their opinion.

And when the last fork was set down, the winners were announced. The envelope, please.

Faeto (Fg) was the team that received the most points from the technical jury, while Carife (Av) won the popular vote.

Observing the smiles in Ariano Irpino that afternoon, though, I believe that everyone won.

Posted by Karen Phillips at 7:48 PM