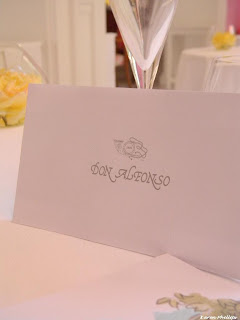 No, this wouldn’t be a trip for the latest ‘scoop’. This was personal. For me. A journey to satisfy my curiosity. To sit down and experience a lunch at a two star Michelin restaurant. Something which, for me, does not happen every day.

So off I went. Off to Sant’ Agata sui due Golfi located about 9km from Sorrento. Stop and go traffic the minute I exited at Castellammare di Stabia. More stop than go, but that was to be expected this time of year. It was a gorgeous day, a pleasing drive, spectacular scenery.

I arrived, parked my car in their garage, and walked into a little piece of paradise known throughout the world as Relais Don Alfonso 1890. Standing in the driveway that separates the reception area and the restaurant, I was immediately greeted with a smile and a ‘can I help you?’

I have an appointment with Mario Iaccarino…was my answer. I was told that he was on his way. In the meantime, I could have a seat, an aperitivo…and relax after my drive from Naples.
The beautiful spring colors that I had seen on my drive earlier where on full display in the dining area. Pinks, reds, yellows, and greens resting in the sunshine which shone through the windows next to my table. A table with a perfect view of the kitchen. Chefs Alfonso and Ernesto Iaccarino’s kitchen decorated in beautiful Mediterranean blue and green hand painted tiles.

Apperitivo? Sommelier Salvatore Di Meo offered me a glass of Ca’ Del Bosco Franciacorta which I could sip while I took in the scenery looked over the menu. A menu with choices ranging from Don Alfonso classics to revisited recipes. It was hard to choose, but with a little help from the staff, my order was sent to the kitchen where Chef Ernesto Iaccarino was waiting. And with a smile from the kitchen window, he sent out his benvenuto; a cream of chick pea soup with an octopus carpaccio resting on top. Right after, another ‘starter’…a mozzarella soufflé with a side of tomato sauce and oregano. I appreciated this welcome as I looked over the Don Alfonso’s wine list. A book that the sommelier student in me was dying to browse through. Don Alfonso is famous for their cantina with prestigious wines. A wine list that I studied, asked questions about, absorbed throughout the afternoon.

But as far as what to choose for my meal, I turned to head sommelier Maurizio Cerio who, after I mentioned that I would like to ‘stay in Campania’, promised to take care of me. He did so by beginning with a glass of Greco from Paestum. A 2010 vintage from Az. Agricola San Salvatore that arrived with a plate of smoked Mediterranean yellow tail. The light pink color of the fish enjoyed its contrast with the colors of the sauces on the side; wild orange, and a fennel seed and grapefruit mayonnaise. There was even a small green ‘oyster’ salad leaf that I was told to eat at the end to refresh my palate.

My choice to sit near the kitchen window was designed so that I could observe the kitchen in action. So I could watch Ernesto Iaccarino weave around his kitchen staff, tasting, testing, directing. And when he gave the ok, my next appetizer was sent to me; deep fried lobster with a sweet and sour sauce, a dip of citrus fruit, and a julienne of spring vegetables. (note to self-ask the chef about this one) Di Meo was back, this time with a new glass and a new pairing for my lobster. A beer from Birrificio Sorrento. This artisan beer was brewed with lemon peel, so it was a nice refreshing choice, served in a frosty cold glass.  Then a dish of cous cous with stewed octopus with a small cup of foam of provola cheese and cinnamon.

Time for a break, I walked around outside taking pleasure in the scenery and silence, when I bumped into Mario Iaccarino. A full morning full of meetings, the usual for Mario, but that didn’t stop him from taking the time to talk with me as he joined me back in the dining room. And joining me here as well was a glass of Cupo Fiano di Avellino IGT 2008 and a plate of tasty morsels of ricotta cheese in a gurnard fish consommé with an infusion of verbena, lemon zest and nettle. Shortly after, Iaccarino sent out a dish of spaghetti with broccoli, codfish, and a buffalo from Paestum carpaccio with a white turnip and blue fish sauce (note to self-ask the chef about this one, too).

I reflected on and appreciated the presentation of each dish that was brought to me. The play on colors, the blending of flavors, the attention to detail by all members of the staff. This harmony continued with my second course, a light dish of red mullet sprinkled with caper powder. Each bite size piece of fish was spread out on a white dish that seemed more like a palette. A palette with drops of rucola and an aglianico sauce. Dessert? And why not? Armonia di fragole e kiwi, strawberries and kiwi. Ciao Salvatore. At this point, I was brought a dessert wine made with Aglianico and black cherries. Elixir di Bacco, Viticoltori Polito.

Lunch at Don Alfonso. A dining room filled with international diners. Tourist from all around the world. Diners, who like me, were curious…wanted to be in this dining room, taste the dishes that many are talking about. Guests, who were treated with hospitality, attention, and care from each member of the staff, the Don Alfonso team. At least three times Chef Alfonso Iaccarino came to my table to see how I was. But not just me. Every diner was important to the chef. Important to the sommeliers. Important to the waiting staff.

My meal was over, my adventure wasn’t. I asked Mario if I could stroll around the grounds, take some photos. He suggested that I check out the pool, visit the cooking school.  Karen...and later, I’ll take you to Ernesto.

I did have a few questions. And about a dozen compliments to pass on. He looked pretty busy, though. I wasn’t the only one that day who wanted to ‘meet with the chef’. He was even in the midst of a photo shoot.

But, once again, a smile from the kitchen window…this time followed by a gesture that said ‘come here’. Inside the kitchen. His kitchen where he gave me a quick tour of his work area, presented me to a few members of his team, and then it was off to converse over his lunch.

I learned many things during my conversation that afternoon. How important it is for the Iaccarino family to use fresh ingredients, fruits and vegetables in season. Many from their own organic farm, Le Peracciole, located in nearby Termini. A place that provides the olives they use for their own olive oil, the lemons for their own lemon liqueur.

That Don Alfonso has restaurants in Hong Kong, Morocco, and on the mega yacht Jackie Onassis.

That Chef Iaccarino likes to add a light touch of Asian flavors to his Mediterranean menu to add a touch of fusion between the continents.

That he also understands the importance of leaving some classic recipes just that-classics.

I discovered that it took nearly a month of blind taste tastings for the right combination for his delicate batter used for my lobster appetizer.

I discovered that the little details make the difference.

Like my plate of spaghetti I had earlier. A plate Iaccarino said was pensato, sentito, fatto-thought about, felt, made. A plate tutto pancia, istinta, made using his instincts. The right pasta-spaghetti from Gragnano. Cooked al dente-firm. Codfish slowly cooked at a low temperature. Buffalo meat sliced thinly and served al carpaccio underneath. Fresh sautéed broccoli leaves. Grated toasted bread crumbs… a sprinkle of pine nuts. Here, Ernesto told me, was complexity with a piatto semplice…

Semplice…simple. The Don Alfonso formula was just that. Complex but simple. An intricate blend of simple, clear cut details that worked hand in hand to make Don Alfonso 1890 one of the leading restaurants in the world.

Simple. From the ingredients used in the kitchen to the flowers on the table.
Genuine. From the heartfelt service provided by the entire waiting staff…to the smile from the chef from the kitchen window…

Curiosity satisfied…well, almost. Maybe I need to go back. To check out their suites. Have breakfast in bed or by the pool. Really delve into their wine cellar in the company of Maurizio Cerio. Take a cooking class or visit their organic farm…

I wouldn’t be the first. I wouldn’t be breaking new ground.
It would be other journey to satisfy my curiosity.