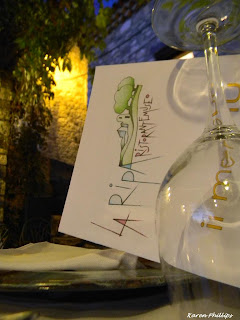 I had just parked my car outside the centro storico of medieval Rocca San Felice in the province of Avellino.  Alta Irpinia.  New territory for me.  All I had was a few mental snapshots from earlier internet research and  my  Mesali guide book. La Ripa Ristorante Museo was one of the 12 restaurants featured at an event that I  attended a few weeks back.  And so here I was.  In the main piazza in front of an enormous 200 year old linden tree asking directions.  Again.  Apparently I wasn’t that far off.  I just needed to continue past the tree and down a quite little stone cobbled alley.

I found La Ripa in a calm little corner of this quiet little village.  I arrived just in time as to see the sunset from the terrace.  The purple/blue/red colors in harmony with the subdued lighting from the pergola was spectacular.  But as stunning and soothing a spot on the terrace overlooking the  valley was, my curiosity led me indoors.  Inside, checking out each nook and cranny of La Ripa.  Its stone walls, cantina, selection of cheeses, pastas etc.  And eventually upstairs where I found a seat in the corner next to a glass of Fiano di Avellino 2009 from Rocca del Principe.

My guidebook mentioned that La Ripa is a place to learn, taste and dream. Rocco Rafaniello, one of the owners, brought me a plate that would begin my lesson.  Tortine di zucchine with a creamy tomato sauce.  Prosciutto powder was sprinkled on top and   a warm  cheese filling inside.  Which cheese?  Primo sale, I was told.  A cheese made using cow milk and doesn’t require much aging.  Lesson number one.

Next. Carpaccio di vitellina, rucola with grated carmasciano cheese. Carmasciano...I had heard about it, but was not very familiar.  So time for my next lesson.  This cheese is produced in the nearby town of Carmasciano.  It is a pecorino cheese, made with sheep milk.  And on this plate, next to my thinly sliced veal and rucola salad, I had a version that had been aged for about 2 months.  As fresh as the lemon and extra virgin olive oil drizzled on top.  My carmasciano lesson continued when I had my next appetizer.  Tempura di fiori di zucchini stuffed with basil and carmasciano.  Carmasciano melted inside my zucchini flower. Soft, warm melted carmasciano intermingling with the fresh basil handpicked from La Ripa’s garden.

Now it was time for pasta, and at this point I mentioned to chef Rino Cuoco, that I just wanted an assaggino.  A little taste of something particular.  Rino went to the kitchen, and a few minutes later was back with a plate of pasta.  Paccheri with garlic, oil, red pepper flakes, and anchovies.  Careful, it is a little spicy, I was told.  I like spicy, I thought.  And I was also ready for my next lesson.  Anchovies.  A popular choice in many inland areas as far back as the Roman Empire.  Not only for its flavor but for its ability to be stored without refrigeration for long periods sotto sale (by using salt).  It has always been the perfect ‘poor man’s dish’ .   A dish which found its way to my table to teach me a lesson in how flavorful and powerful a ‘poor man’ could be.  I was warned about the hot pepper on the side of my plate.  The very hot pepper.  I should have listened to that lesson.

Rafaniello brought me my secondo piatto.  Coniglio disossato a cottura lenta in olio extra vergine e pepperoni cruschi.  Boneless rabbit with red cruschi peppers.  As I was taking a few photographs of the dish, Cuoco asked me if I knew what cottura lenta meant.  Lesson number four.  Cottura lenta in olio meant that this rabbit was placed in pan of extra virgin olive oil.  Oil that was at a low temperature of about 75/80 ° C.  And then  cooked slowly…lenta.  That way it stays tender, doesn’t lose its flavor, its juices.

I decided to take a break before dessert.  So with a couple of cats who volunteered to be my guides, I roamed through the narrow alleys and past the low houses with their stone walls.  Towards the  main piazza with its fountain. Its church.  Its silence.  And then, as if on cue, my guides brought me back to La Ripa for dessert.  Arrotolata di mele annurche al profumo di rosmarino e canella sul crema di limone.  An apple pastry that had amazing aromas of cinnamon, light rosemary and served on a lemon cream sauce.  This time I did not need a lesson. The aromas here brought back memories instead.  Of home.  And of my home away from home.

Maybe that was the lesson.

Email ThisBlogThis!Share to TwitterShare to FacebookShare to Pinterest
Labels: a night out, campania wines, irpinia, mesali