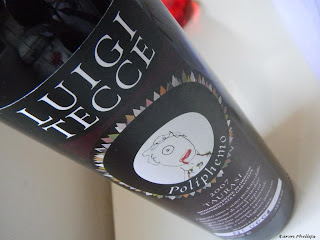 I used to be one of those people who assumed that it doesn’t get hot in Alta Irpinia in the summer. Used to be. So it was a refreshing relief to take a break in a cool cantina in Paternopoli. A fresh comfortable cantina where I talked with Luigi Tecce about his Poliphemo, his Taurasi DOCG made with grapes from his Aglianico vineyards speckled around the area. In Montemarano, in Castelfranci, and here in Paternopoli. Vineyards that do their best to give Tecce what he desires in an Aglianico…in a Taurasi.   He is constantly looking for his idea of the right balance between a grape’s tannicity and acidity. Harvest?, I wondered. November, but varies. He thinks for a moment. 2007, around the 6th of November…2006, around the 26th…more or less.

As comfortable as it was in the wine cellar, talking with Tecce, it was time to hit the vineyards. A quick glass of water, then out into the heat.

Tecce’s small winery is located in a very interesting position. All you have to do is cross the narrow road in front of the cantina and you leave Paternopoli and end up in Montemarano. Down the road a bit…Castelfranci. Walking through the vineyards ranging in ages from 20 to 30 years old, Tecce points out how   the geologic history of this territory plays a big part in the soil composition. Parts are clayey, other parts rich in calcium, potassium, and traces of volcanic rock.

Man was it hot. Tecce smiles…giornate calde…notte fresche. Hot days, cool nights. Another key ingredient to why this particular territory is ideal for Aglianico. Ideal for Taurasi. And as hot as it was, it was impossible for me to imagine that less than a week earlier a hail stone hit part of Paternopoli destroying one of Tecce’s vineyards. We went to take a look. I saw up close how a 10 minute midsummer storm destroyed an entire year of hard work.

It was a quiet drive back to the cantina for our wine tasting.

Wine is meant to be drunk, not sit the shelf, Tecce believes. So he pulls some glasses off the shelf, grabs a few bottles and we begin our wine tasting. A tasting that included two of Tecce’s experiments with white grapes that he had purchased. At times his cantina becomes a little ‘science lab’ as he experiments with Trebbiano, Malvasia, Greco di tufo, and Coda di Volpe.

A wine tasting that continued with his Poliphemo Taurasi DOCG. His 2007…2006…2005. I set each glass next to the white wall in the corner of a small kitchen where we held our tasting. The light pouring through the window was ideal. Perfect to note the dark ruby red color. The slices of Carmasciano cheese, soppressato salami, zucchini and red and yellow peppers was an ideal match for each aroma, each taste, each vintage, each story that I had in front of me in my glass. Stories that Tecce shared in that small kitchen. Stories of the past harvests, past struggles, past failures and past successes. Stories of the future. Of more experiments like wine making in terracotta amphoras. Of enlarging the winery.

It was hard not to get caught up in Tecce’s subtle excitement. Of his love for what he does. His territory. His wine. And as I finished my glass of 2005. As I finished my serving of fresh ricotta cheese with Tecce’s homemade grape jelly. As I took pictures of the wine bottles, including his new 2007 label which will come out next month, As I made plans to return for the harvest, to visit Tecce's older vineyards, I almost forgot how hot it gets in Alta Irpinia in the summer.

Posted by Karen Phillips at 4:25 PM