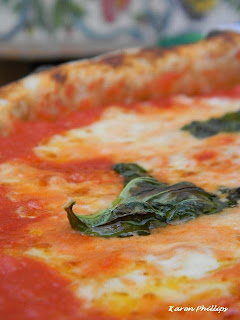 Pizza can be a serious business. And in my adopted Campania, we take it very seriously. The right ingredients, the right pizza dough, the right temperature in a wood burning oven. So when I received an invite from my friend Maurizio Cortese of Gazzetta Gastronomica to have a pizza, it was an easy decision. After all, Maurizio invited me out for a pizza back in June …an event that would be very hard to forget. This was to be a little more casual, I was told. A few friends, pizza, wine. With maestro pizza maker Franco Pepe. In the garden of Don Alfonso 1890 in St Agata sui Due Golfi.
When I arrived, Pepe was checking out the ingredients. Scrutinizing every little detail. Testing the temperature of the oven. It’s like driving a car that doesn’t belong to you, he smiled. So he decided to take it for a test drive. I watched in admiration as he took some of his hand made pasta dough, tossed it around and shaped it into the perfect shape. He drizzled extra virgin olive oil made by Iaccarino and sprinkled a little oregano on top. Then into the oven. Then out of the oven. A little grated conciato romano cheese that Manuel Lombardi  had brought along, and we were set. I remember that first bite of his ‘test drive’. A bite that reminded me how flavorful a simple pizza can be. A chance to taste how light, airy, and morbido the crust was.

Pepe was ready to go. Friends were arriving. Chef Ernesto Iaccarino stopped by to make sure everything was going well. After all, his staff had prepared an amazing tomato sauce using tomatoes picked from his family’s garden, Le Perracciole. Their freshly picked basil was ready to be placed on top of whatever pizza Pepe had in mind.

Pepe was ready to go. Pizzas were soaring out of the oven at a tasty and appetizing speed. Margherita, marinara, pizza with sliced pears courtesy of Lombardi. His famous pizza stuffed with escarole and black olives. A pizza that puffs up in the oven like a party balloon. And then when sliced…you can almost hear a swoosh, as the air is released. I took a quick peek inside and noticed the light crust, the bright green colors of the salad inside. Amazing aromas of olives, capers, and extra virgin olive oil was hard to resist. Karen…nero casertano?, Pepe asked. He remembered my favorite. A pizza made with provola cheese and prosciutto crudo prepared using the ham from a black pig that is only found in Alta Casertana.

Pepe was ready to go. And as a small group of us sat around a table enjoying it all, many of us reached for the fresh figs that Chef Alfonso Iaccarino had picked that morning. Elisia Menduni, friend and fellow photographer imagined that it would look great on a pizza. A simple pizza, without tomatoes, just a few slices of fresh figs sprinkled on top. Maybe a grating of that spicy conciato romano cheese that was driving everyone crazy. A star was born.

Cortese mentioned wine in his invitation. How could we go wrong in the hands of Don Alfonso’s head sommelier Maurizio Cerio who had a historical wine cellar at his disposition? Gragnano, Pallagrello Bianco, Coda di Volpe and Taurasi were there to pair with our pizzas…to try, discuss, degustare together.

It was a casual afternoon. A few friends. Friends enjoying a pizza, wine, light conversation, each other’s company.

Posted by Karen Phillips at 8:38 PM