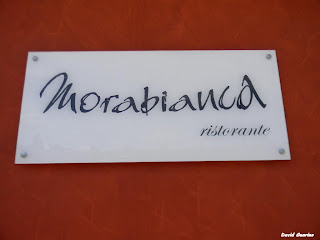 As you pull into Mastroberardino’s Radici Resort, Contrada Corpo di Cristo #2, Mirabella Eclano (Av) you can’t help but be awestruck. Awestruck by the long driveway with perfectly manicured trees inviting you to enter into Irpinia. As you park your car you are instantly attracted to a crimson casa. A casa which is home to Morabianca Ristorante…home to Chef Francesco Spagnuolo.

This wouldn’t be the first time at Morabianca, I had several dinners here during press tours. But this time it was my tour. My chance to relax. My chance to enjoy what the chef had chosen for me to try. My chance to talk with him after lunch. I arrived a little early, but Spagnuolo was ready. Ready with an array of appetizers that I enjoyed in the lobby of Radici Resort with a glass of Morabianca Falanghina Irpinia Falanghina DOC 2010 while he went to work. Appetizers that were simple, but packed with flavor. Flavors that gave me a hint of what Spagnuolo had in store for our afternoon together. Soppresato di Venticano with white grapes. A spoonful of caponata with anchovies from Cetara and nodino from Montella. An eggplant croccheta on a bed of tomato sauce. And warm surprise, a little ball of fried potato and cod.
At this point my table was ready, and so was I. Rocco Plati, Morabianca’s Maitre D and Spagnuolo’s ‘lifetime friend’ showed me to my table. A quick chat about wine, food, and Irpinia over a glass of Lacryma Christi del Vesuvio Bianco DOC 2010 and Spagnuolo was ready with another benvenuta….a glass of finely cut cubes of celery and cantaloupe with a small slice of smoked cod. A colorful plate of carpaccio di vitello with a crunchy escarole salad on top side by side with lonza with almonds. Next, a plate that was a bella sopresa…what one might think is a simple zucchini soup, but Spagnuolo made it super by adding a splash from the sea…clams and shrimp. Rocco returns, and knowing my love of wines, a discussion of whites and aging brought us to a discussion of Fiano di Avellino accompanied by glass of Fiano di Avellino ‘Vintage’ 2006 DOCG.
Discussions continued as I hopped into the kitchen for one of my favorite pastimes…watching the kitchen in action. Watching as Spagnuolo silently and calmly managed his team, his squadra, they were finishing up my first course. I arrived just in time a s Spagnuolo was performing the ‘salti in padella’…the act of tossing firm pasta in the pan with its sauce while it finishes cooking. My spaghetti was being enveloped in all the flavors found in my crema di noce sauce. Then Spagnuolo brings it over to my plate and silently places it on top of a liquido di ricotta and  agrumi. A small grating of bottarga, the careful placing of a small sardine on the side and my dish was ready. Plati is ready as well. A glass of Lacrimarosa Campania IGT Rosato 2010.
Dessert? Hmm. Ok-a mini chocolate cake with a warm chocolate filling. A side of pistachio ice cream, thank you very much. And over the last couple of bites, I reflected on how I was happy that I returned. Content to observe the kitchen in action. Pleased to witness another chef who enjoys himself in the kitchen. Who enjoys preparing something special for his patrons, customers, his friends. Happy to chat with Spagnuolo after lunch about his past experiences. About food, Irpinia, recipes…


Due ricette? A couple of recipes? He asks.

Posted by Karen Phillips at 4:13 PM