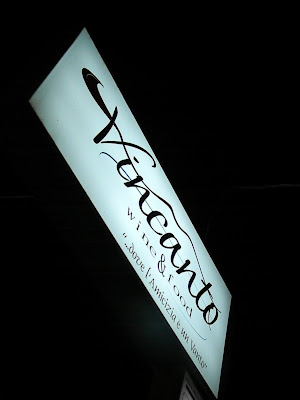 Pompeii is one of Campania's top tourists spots.  Known for its famous ancient ruins such as the ampitheater, the Faun's house and Villa dei Misteri.  Known for  its breathtaking  sanctuary of the  Beata Vergine del Rosario/Blessed Virgin of the Rosary.
As far as places to eat, there has always been a wide range of places with tourist menus to please the crowds who are in town for the sights and are looking for a quick bite to eat.
So it was a pleasure to finally make it out to Vincanto - Wine & Food, the enogastronamical adventure that Yuri Buono began several years ago.  A passionate adventure that I soon got caught up in as Buono greeted me at the door and led me to my seat. 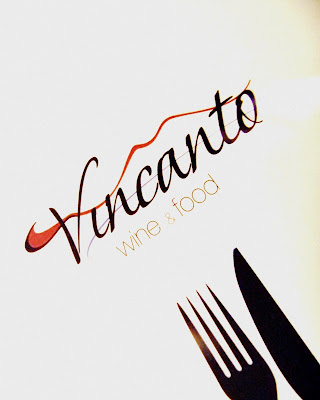 My intention was to have a quick aperitif, having seen an advertisement for his Viniziamo la Serata featuring a buffet and a glass or two of wine from a small but robust wine list. But as Buono pulled out the menu, and we began to talk, I was impressed with the passion and pride he had with every item on the menu full of history, traditions, and small producers (all of whom Buono has visited himself to guarantee their authenticity) 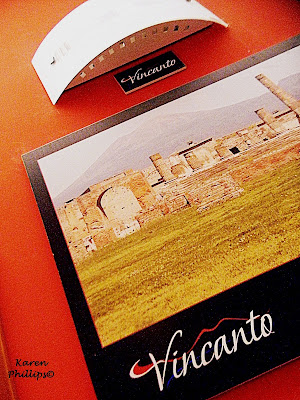 Buono's desire for his guests is for the to be able to choose a fantastic  wine, whether by the glass or bottle,  and then surround it with something amazing yet uncomplicated to eat. So, with that in mind, he asked me what I would like to drink.  Something white, I said...and of course, something from Campania.  We headed over to take a look at the wines presented on a series of shelves on the wall.  Buono reached for a bottle - What about this one?  Lacryma Christi del Vesuvio from Villa Dora, a winery which is about 10 minutes away. 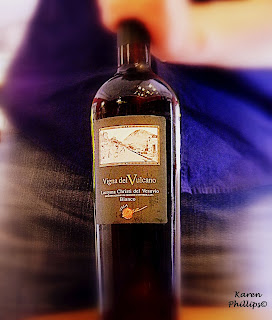 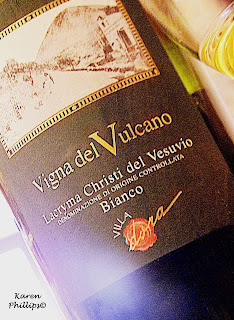 And why not? He placed it in the chiller, and several minutes later, he opened up a fresh flavorful 2012 to enjoy with the following dishes.

Bruschetta.  One topped with a sweet yellow piennolo tomato from Vesuvius (Elgo di Saverio Bifulco), the other - that same sweet yellow gold, but with a thin slice of  black pork lard from Caserta. 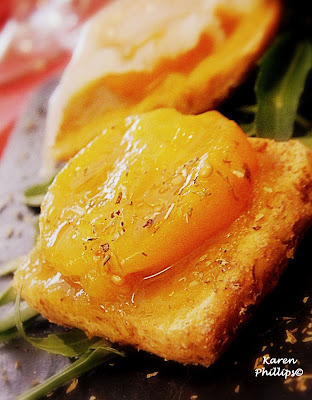 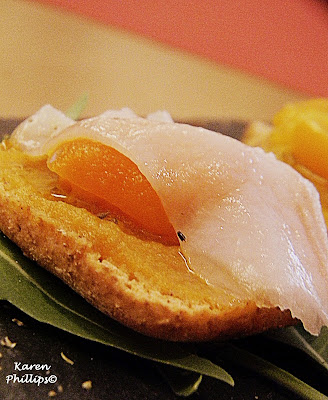 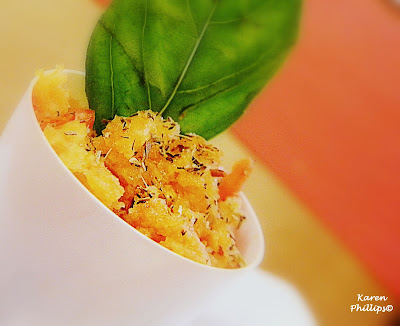 Smoked fish was also on the menu - cod, trout and salmon (Lofoton) which pratically melted in my mouth.  The addition of red peppercorns were a nice touch. 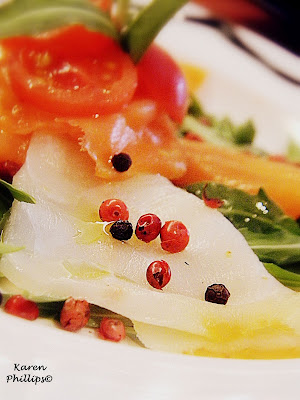 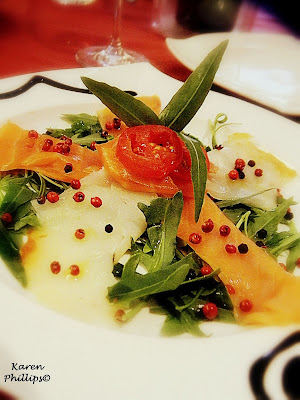 I learned a new word - Testaroli, a Slow Food Presidia from Lunigiana in Tuscany.  Buono eyes lit up as he shared with me his adventures in Tuscany and showed me a quick video on how the this thin crepe like pasta is made. 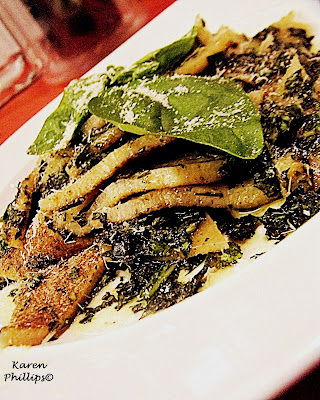 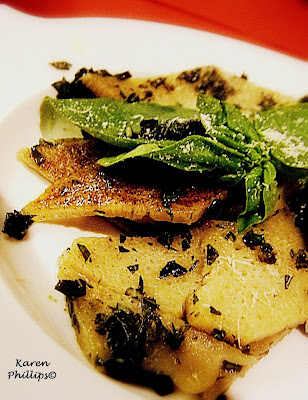 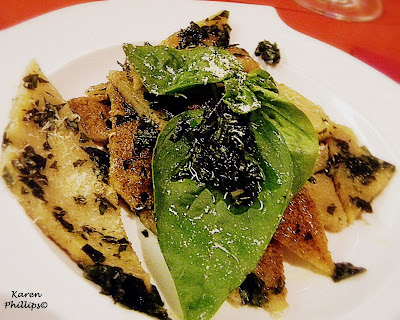 His menu presents it as they do in Tuscany with loads of basil and grated cheese.

Another beat the heat menu item - a tomato stuffed with lettuce and anchovies from Cetara.  This was accompanied with chopped arugula and  radicchio as well as thick slices of buffalo milk mozzarella cheese. 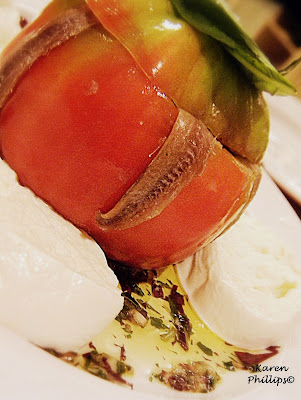 While enjoying this taste of Campania, Buono shared with me a project that he is close to and passes on to his clients.  Many of the fresh produce he receives for Vincanto come from Marialuisa Squitieri's organic farm Madrenatura Agricoltura Naturale.  He offers an interesting opportunity to those who wish to have fresh farm products as well by clicking on this link, seeing what is available, and calling Buono to order a package which can be picked up each Thursday at Vincanto.
So far so good.  Time to move on and conclude my aperitif/dinner at Vincanto.  But first, a new wine, sticking with Campania and close to home, a Lacryma Christi del Vesuvio Rosso by Vigna Pironti. 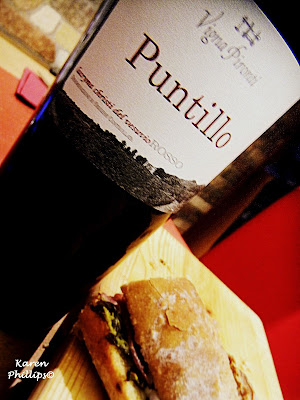 And what this wine needed was a hearty sandwich made with bread Ancient Pompeii style made with barley and farro wheat.  This crunchy little loaf or pagnotella was stuffed with pancetta, mozzarella and  friarielli greens. 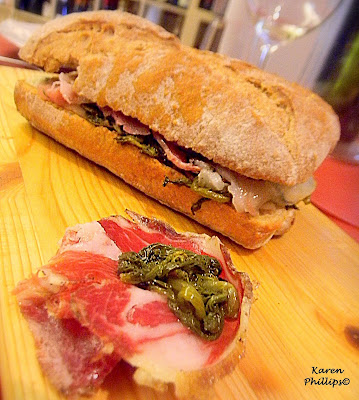 An enjoyable evening, which for me was coming to an end, for others was just beginning.  As I was about to leave, Buono excused himself and headed over to the second dining room where his guests had been patiently waiting for him to play his guitar and sing a song.
A Neapolitan song of course.  So he sat down and did just that. And as he did, I could hear the same passion and pride in his voice that I had witnessed earlier as he described his menu., as he shared stories, as we tasted the wines, as he greeted his customers, his guests.
Guests who like me, are Vin-dedicated and who will return to Pompeii for the ruins, for the sanctuary, and for Vincanto. 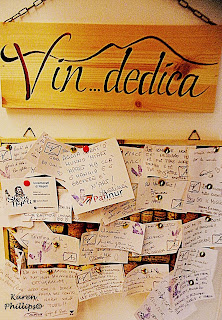 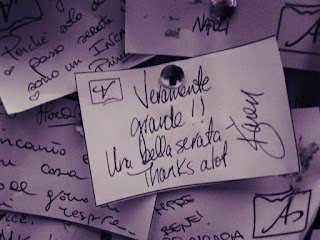